Life in the interim (part one)

This is a post about the time between his death and my last post prior to that.

For the first few weeks after I was laid off I really was on fire for God. I wanted to go into Spartanburg everyday and just go where God wanted me to... but unfortunately, I didn't have a way. I don't own a car. I thought I could ride with my mother, but she got upset by the "pressure" of me wanting to go each day so I only got to go once or twice a week. Then my mother stopped working. She works an unsteady job, project to project, so that was normal, but I didn't have a way into town at all.

We live in the country, which can be great. I really love getting up in the morning and listening to all the birds, including my neighbor's roosters, throwing hay to the goats... just the beauty of it. But I miss people. I love people. I want PEOPLE. But not only are people few and far between, they tend to move here because they want privacy. There's a lot of "Trespassers will be shot" signs around here. There's no sidewalks and people tend to let their dogs run free, so I can't even walk the dog and feel safe.

I am really trying not to complain. I have been doing too much of that. I have a roof over my head, food in my stomach, a family who loves me, even if they don't get me. I have been catching myself complaining far too often. I am blessed. I am not happy though. I feel restless yet unable to move.

I didn't want to get another job, but what I was planning on doing was still working: working for the Lord. I know God has called me to work with people, His people. And I know God is the ultimate provider and if I do what He wants me to do, He will take care of me always. This applies to economics too. But even though I felt like I should get to town, I didn't have a way. And the longer I went without really doing anything of value, the more helpless I feel. And the farther from God. I'm not trying to blame my parents. I'm not really sure what was supposed to happen. Were my parents in the wrong, just not right where God wanted them? Happens to us all. Or maybe I was, maybe I didn't try hard enough to find a way? Or maybe I was just supposed to honor mother and father and not go to town? I think that might be true, but I don't know. But people are meant to work. Maybe not have jobs, there's a difference, but work. But I haven't really gotten to do work in a while.

I tried to throw myself into the house and I made headway on that, but it burns me out more than anything else, I have so much baggage tied up in this house as well as housework. I think if I had to housework elsewhere it'd still burn me out fast, but not as bad. But this house and cleaning? It's exhausting, mentally and emotionally. Still, like I said, I did make headway.

I was able to pay my own bills for a while, but recently I had borrow from Mom and Dad. Shaming. And imprisoning. But we'll get to that.

My younger sister was home for the month of May, but now she's at an internship until August. She's loving it, which is great. We got along really well while she was home. We tend to fight, but we didn't fight at all while my parents went on vacation for a few days. That was major progress.

My other sister, who is married and lives in FL, is currently on vacation in Australia. Lucky girl.

But we got kittens. And a pool. 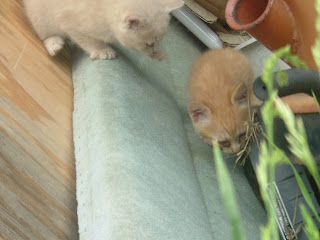 Those were the two huge things in my life the month before my fiance's death. A stray cat, a calico we named Mallory, showed up. After two weeks of feeding her, she moved her three kittens into the garage. They lived there for five weeks, then for some unknown reason she decided to move them away. And she lost her daughter, a calico we called Marshmellow. She's probably dead, though we'd like to hope maybe some other human in the area took her in. She was obviously half persian or something, had a different father than her brothers, and everyone agreed she was the cutest. But we got the brothers back and moved them into the screen porch. There is an orange tabby named Baryon and a cream tabby we called Buffy until we knew it was a boy and now he's Devlin. Mallory was mournfully meowing to us all day and night that first day and a half until she figured out she can get into our screen porch through a rip in the door. It's about halfway up, too far up for uncoordinated kittens that were about 8 weeks at this point. So now she comes and goes as she pleases but the kittens are living on the porch. They've sort of adopted Toby, my mom's cat, as the stepfather. Mallory and him are sexually flirting, even though Toby is nuetered. The kittens, though not Mallory, have met Sophie my dog and that went well even though I'm not ready to let her go out there without a leash. My parents dog and my sister's cat have not had the honor yet.The dog will be fine, we're sure, but he's 60 pounds, versus Sophie's 17 and we think he's too big for them not to be terrified yet. Currently they're about ten weeks.

We got the pool for Mother's Day. It's an Intex Easy Set, an inexpensive brand of aboveground pools. I was going in it everyday it didn't rain. It rains most days though. But I'm the most tan I've ever been in my life. I actually have freckles! I've never had freckles! And I use sunblock every single time, but it doesn't block everything. Still, I don't think I have gotten to swim since his death. I had been swimming about an hour beforehand. That's not on purpose, it's more that I just wasn't in the mood and it's also rained a lot. I probably should though, exercise being good not only to stay fit but for the much needed endorphines.

I've only tried to apply to a few jobs, I'll admit, and I know I need to find some source of money. I found a job I really really wanted but I didn't even get called back for an interview. I would have been perfect! I'm very, very discouraged and lost on this front.