Love and Happiness in Spartanburg (part 1 1/2)

This is more of a normal blog entry then a summation.

The other day, Tabitha and I went out and had a really good day. I meant to include it in "part one" because it was the Sunday before Eric died, but I'm actually happier I forgot because it that post was long enough already.

We first went walking on the Cottonwood trail. Which I love. So does she, but we rarely get to. She lives in Woodruff, and I don't live much closer to the east side, and she's a major worker. She's got a full time and a part time job as well. But we got to do it, which was great. We ended up finishing the actual cottonwood trail for the first time, and also walked a few of the side trails. We've not done them all but my official favorite is the wetlands trail. It's a boardwalk trail over a marsh and you don't really feel like you're in the middle of Spartanburg at all. This was only our third time getting to go. The first time we walked from the start (near the pool) to the Duke Power Bridge and I had my dog with me. The second time we didn't have any dogs. We parked at a entrance off the side, I forget off which road. We got to where the cottonwood trail meets the end of the ridge trail and my friend saw the stairs. She wanted to get more exercise so she ran up and tried to run down... and fell.

She mainly just got bruises and scrapes, she did whack her wrist and a rib, but overall it wasn't so bad. But she was sort of in shock and thought she was hurt way worse than she really was. We got back to the car and then went to Lydia's house. She lives on the east side. She and her dad let Tabby take a shower (she was covered in mud) and use some neosporin and bandaids. She was aching all over for a few days, poor baby. But anyway, that was at least a month before the day I'm supposed to be blogging about!

This time was uneventful. We didn't have our dogs with us because we were planning on doing something else afterwards and unfortunately there are few places in this area that allow dogs.

We probably walked at least three miles maybe? Then we got in the car and decided to eat. We drove to the west side. My family has a costco membership and I am broke so we went into costco and I got the $1.50 hot dog meal. It's the biggest, most filling ever foot long hot dog and a 20 oz drink (plus refills if you eat there) for $1.50. It's got to be the most economic meal offer in Spartanburg... except you need a membership to get in. :) My friend wasn't feeling that, so I got it but she went across the parking lot to the food court at the mall and got some Japanese dish. I think we looked a few shops before we left the mall.

She was exhausted by the walk. Actually, all the endorphins had hit her on the trail and when we went back to the car she was still raring to walk more. But she crashed. So we were trying to figure out what to do, and I was thinking "hmm. Nonexerting things to do on a Sunday". And I came up with Barnes and Noble. Turns out she had a book she wanted to get anyway, so we went and enjoyed the airconditioning and the lovely lovely books I can't afford. I love books.

They didn't have the book she wanted, and she decided ordering it off the internet was probably cheaper than having them order it in the store, so we didn't actually buy anything.

After that, we went to Hatcher Gardens. I'd actually brought a library book, and we went near a waterfall in there, where there is a stone wall in a circle? And it was so cool, we got to see a marriage proposal! After we'd been there about fifteen minutes, just chilling, her texting her husband and me reading in between chatting to each other, this young couple ran excitingly to the waterfall's edge. They were tattooed, I think, or at least one of them was, and his head was shaved. We couldn't hear them over the waterfall, but we saw her lean over and pick up a plastic dinosaur and they laughed a lot. It looked like a stegosaurus. Then he got on one knee and my friend said "Is he proposing?" and I said, "Nooo, it's got to be a mock proposal" just because they were still laughing. But then he pulled out a ring and slid it on her finger! I thought we should clap, but my friend didn't. You know, on all the tv shows when a proposal happens in a restaurant or something everyone claps if she says yes. They kissed for several minutes, they were so cute! Then they ran off, beaming and holding hands and I beamed back at them. I wonder what the story was with the plastic dinosaur. 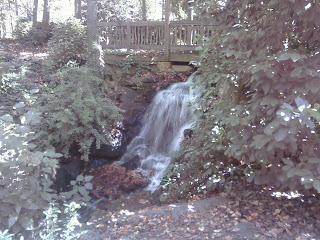 The waterfall at Hatcher Gardens where the proposal took place.
I was afraid with my fiance's death that that memory might be painful. But really, it's not. It still makes me smile. How many times do you get to see a marriage proposal, randomly like that? It was beautiful to see their love and happiness. Love and Happiness has beauty transcending sorrow. If someone from that couple ever reads this, I wish you felicitation, happiness, and a long life together.
After that, my friend and I went home.
Posted by Pamela M M Berkeley at 10:59 AM