The Trip to Kansas City

Lydia and I left Spartanburg Thursday morning at 8:45 and I got to my aunt and uncle's house probably around five or six yesterday (Saturday). First, a brief synopsis of the journey:

Thursday:
Having eaten breakfast at my friend's house, we only made one rest stop before briefly having lunch in a Taco Bell about half an hour past Knoxville.

We'd completely avoided traffic and delays and were probably a good two hours ahead of schedule when we got to Nashville and missed our exit. We saw it, but we just couldn't get over fast enough. So we had to do a secondary way, that led us to the same place but through bumper to bumper traffic. Which wouldn't have been so bad except it was on a road where many other highways seem to be constantly merging and everyone (especially giant 18 wheelers) kept changing lanes for no apparent reason. We felt we'd almost been creamed like three times, but God protected us.

The car did something weird at one point, and we pulled over. Lydia checked the oil, and that wasn't it. So we just decided to use either the AC or the stereo and not both and that seemed to solve it.

Even so, we were still way ahead of schedule when we got near her aunt's house in Kentucky. So much so that we decided to randomly stop at a garage sale we saw.

We got to her aunt's house at 4:30 Central time. Her aunt wasn't expected to be home, but she had told my friend where she hid a key. We were there for about half an hour until I realized something... I didn't have my wallet! 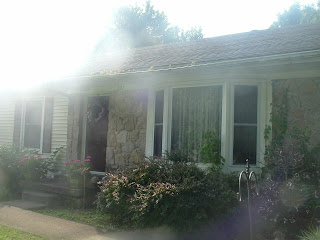 Lydia's aunt's house in Kentucky.
The last time I had remembered seeing it was at the Taco Bell, as I'd not used it at the garage sale. I figured it was either at the Taco Bell, the side of the highway where we stopped to check the car, or the garage sale. Since the Taco Bell was the only place I could hope to call, we hoped it was that. We tried several methods to get the number, but finally we found the reciept. It didn't have the area code on it, but we were able to obtain it and called and, Praise Jesus! it was there! You can't get on a plane without ID anymore and I'm supposed to be flying home. They agreed to use some of the money in it to pay for postage and are mailing it to my aunt and uncle's house.
After that crisis was resolved, her aunt was home and we ended up going out to dinner. It was good, and then afterwards we sang together, then went to bed.

Friday:
We woke up and had breakfast, and hit the road by 8:45, again.

At 2:30 Central we still hadn't eaten and were near O Fallon, IL. Lydia met a pastor when she was in MO last time who lives there. He and she and I have been having a 3way email conversation about God and the Body of Christ and community. So we called him up, just in case he was free, and he was! So we had a two hour lunch at the "St Louis Bread Company" which is really Paneras. 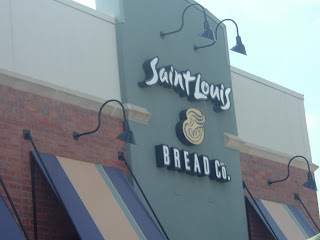 Just after we left him, we made our biggest error. First, I read the map wrong. Then we turned around and my friend was saying how she should have listened to her gut and not my navigation. So then we get on the right road and I fold up the map and say confidently that we'll just stay on this for a while... and not five minutes later she says "aren't we supposed to turn here?" and before I can answer turns off. But of course, that means we were off the road AGAIN. So we decided that God had that happen so we were both humbled. :)

We'd missed the bypass, and had to drive through the heart of St Louis, which took a while but now we have really nice pictures of the arch. 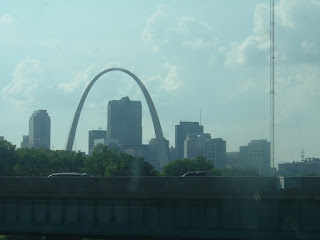 We were finally in MO and it was pretty much smooth sailing. We got to the town right outside of my friend's camp, where she is working as a counselor this summer, and we'd not eaten dinner since we'd had such a light lunch. I asked if we should stop but she just wanted to go there. So we did.

It is very hot. :) Otherwise, it was pleasant and the people were wacky but nice. It was the last night of one camp session and so the other counselors were busy so my friend and I and her guitar, Sancho, went singing to the Lord. Later, we played with the campers, and then had a very late dinner and went to bed.

Saturday:
We woke up and had breakfast with the campers. Then my friend helped clean up and I went and packed up and sang unto the Lord. Then my friend and I went and sang in the chapel in the woods and played with Rex, the camp dog. But it was too hot for much singing and then it was really time to go. A fellow counselor decided to tag along. We were meeting my aunt and uncle half way, in Columbia, MO. We took 68 to 63 and 63 was supposed to take us all the way to Columbia, through Jefferson city. Apparently in Jefferson City you have to take three exits to stay on the same road? Not knowing this we continued on the same stretch of pavement, only apparently it was now 50! We realized this half an hour out of Jefferson City and had to turn around and therefore took an extra hour to meet up with my poor, patient relatives. My phone died just before we met with them. 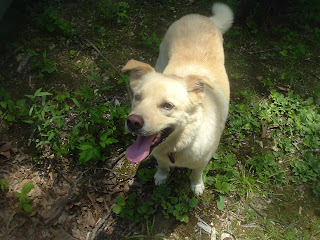 But meet with them we did, and they invited my friend and whoever she wants to bring to come visit whenever. I'm hoping she'll come next weekend... and bring my phone charger! :-P I found out when I got to their house that it wasn't amongst my baggage, so I'm guessing it fell out in her car. I know I had it when we left her aunt's house and I didn't touch it since then (hence my phone dying).

Then last night me and my aunt and uncle reconnected and shared fellowship as fellow members of the Body of Christ. It is awesome getting to know each other that way. We ate dinner and they went to bed by 9:30 because they're on weird schedules (like I'm ever on anything but, right?). I stayed up reading and bathed, but I think I fell asleep by 3 am, if not before. I know I was up at midnight when my uncle had to go to work.
Posted by Pamela M M Berkeley at 12:31 AM