Yay. The internet is back.

On Friday we met and had a prayer meeting for the Vangsnes boys.
On Saturday I didn't do much. Cleaned the porch a little.
Today, Sunday, Tabitha and I were going to, FINALLY, hang out with my Sophie and her dog Lucky...
It didn't happen.

I did get to hang out with her. But before we did, she was called by a woman who was giving her a kitten. My friend had to put her cat to sleep a little over a month ago, and a woman at her work offered her a free kitten, with shots and a little bag of food and everything. She's decided to get it weeks ago, but now the lady was it was ready to go and that she was leaving town so my friend had to get it this afternoon. So we decided to put our plans on hold for an hour or so and I'd go with her to get it, leaving the dogs behind.

But finally we got him and he is ADORABLE. And I especially think so because he looks almost just alike my kitten! He's going to have medium length hair, while Devlin has short hair, and he's got lighter eyes. Otherwise you'd be hard pressed to tell them apart... except her kitten (who is yet to be named) is about 8 weeks old and Devlin is 16 weeks old. We took some pictures of them together and Devlin is twice his size, not just his age. But still, Devlin is very much a kitten, not a cat. The funny part is our grown cat Cinnamon (and so far as we know none of these cats are at all related) also looks just alike. We'd found it crazy that we had a kitten Cinnamon's coloring. But now my best friend has one too! Cinnamon isn't really friendly with other cats, but I wish she was so we could have a three picture: Full grown cat, older kitten, baby kitten. It would be so cute!

But on the way back to my house to get Sophie, my dog, she got a phone call. Her grandma had a stroke. She was sobbing, called her husband and told him. She was going to go to the hospital but her mom said not to, that she would just call her when they knew anything. So we decided to hang out but we didn't take the dogs. We set up her kittens litterbox and such at her house. I lent her a cat carrier to keep him safe from their dogs. The kitten HATES her dog Ziggy. He's a large dog. But while not a fan of the little dogs, she didn't seem to hate them. Hopefully she'll adjust. She and her husband rent a room at her mom's house. Her mom and her mom's husband live there, with her mom (grandma) and my friend's dad.(It's actually more complicated, but that's the simplified version). She and her husband have three dogs, Ziggy (a large dog mix, possibly Sharpei and boxer, but with something else too?), Angel (chi/dauschund mix), and Lucky (a little 7lb mutt). But her family have a lab mix: Cutter, another large dog, Yogi, six dachshunds: Teenie, Winky, Xanadu, Buddy, Peanut, and Jazzy, and a chihuahua (Biscuit). The little kitten is the only indoor cat. There is an outdoor cat that is theirs, Boots, and then another outdoor cat they don't claim but is Boots's friend and is always there and shares his food so is basically theirs.

So the kitten has to learn to love dogs. BUT I am hoping she'll ease the kitten into it because it's bound to be scary and intimidating. All the little thing has ever known is the home it was born into and not only does he have to get used to a strange place and being away from his siblings and other family, he's got barking and jumping dogs in his face.
But he'll adjust. I just hope he doesn't turn mean.

Her grandmother is being hospitalized tonight. Please pray for her. But I think she'll probably recover soon, I hope.

My late goats were named Henry and Blake. In honor of them, our kittens are now Baryon Henry ______ and Devlin Blake ______ (blank being our last name). Their mom is Mallory, their "step father" (they love him and he loves them but he's very much neutered) is Toby (technically Tobias but we just call him Toby). And indoors is Cinnamon Swirls _______. She and Toby are friends, even boyfriend/girlfriend (though she is very much spayed), but she takes a very long time to like any animal and in the meantime terrorizes them. So the outdoor cats are not allowed in. Toby is also an indoor cat, but he never tries to escape so he's allowed on the front porch. The outdoor kittens grew up on the porch, with the mom able to come and go. Now they come and go as they please as well, but they are smart enough to sleep on the porch at night, where they are safe. So Toby sees them some of the time when he's out there, but he always sleep inside.

My dogs, to remind you, are Sophie, my rat terrier, and Radar, the german shepherd mix. That is all the pets we have, now. Way more cats then I've ever had before (we've never had more than two before) but without the goats it doesn't feel like we have many pets at all.

Cinnamon is my younger sisters. She's about to start her junior year of college. When she gets her first place, she'll be taking Cinnamon, but she can't live on campus with my sister. (Sadly, because she and Alison ADORE each other and it's so sad to see them miss each other.)

So my parents only have one dog and now three or four cats that are "theirs". And my dad keeps saying the outdoor cats aren't really ours, so in his head they just have one dog and one cat... only he doesn't really mean it. He likes Mallory and the kittens, he just hates the idea of having to pay their vets bills. Cinnamon was just sick and it cost $550 to treat her, and so he's seeing dollar signs disappearing when he looks at them.

I have been wanting to put pictures on here.... so I'm going to try to put a picture of Devlin and my friend's kitten up here! But I have dial up (which is why I've never attempted this before) so it might not work.... 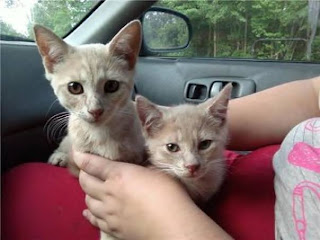 I hope that worked! Now that I'm at it I'll try to put in some more pictures. Here is a picture of Cinnamon, the adult cat that could be part of their "We look so alike it's hard to believe we're not related trio!" (Though they all have different color eyes. Devlin's eyes are a sort of amber, my friend's kittens are a medium goldish green, and Cinnamon's eyes are very light gold with a hint of green) 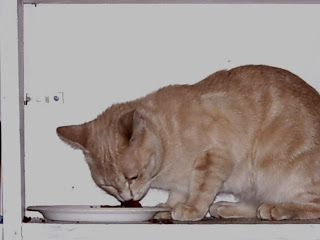 Sophia is my icon. Here is a picture of Radar: 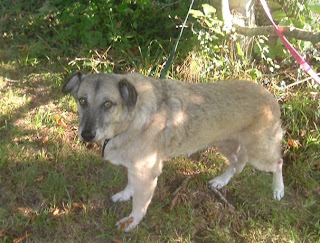 And a picture of Toby. 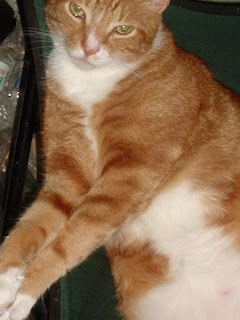 I don't have a picture of Baryon or Mallory. The memory card in my camera got scratched somehow so I effectively don't have a digital camera until I buy a new memory card. And since I don't have a job right now that's not going to happen. It got scratched on my trip to Missouri, which is sad because I'd taken tons of pictures with the express intention of putting them on this blog.

But here's one last picture, a cute one of my darling Sophie girl. 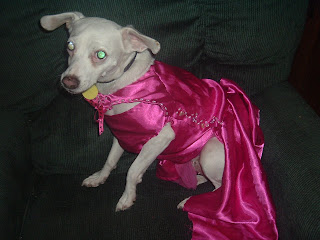 Posted by Pamela M M Berkeley at 6:55 AM