Singing in the Rain? 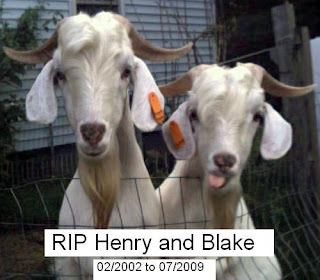 When it rains, it pours... to borrow a cliche.

Wow, the past 48 hours have been eventful.

After coming home from Bible study and blogging, I got on facebook and Tabitha was having a major crisis. Actually, more like several simultaneous crises. I was able to talk about God with her though, and that was good. I ended up leaving my house around 2 or 3 in the morning and going with her. Before I left I fed the dogs and took them outside, put water out for the indoor and porch animals, and fed all the cats. I also fed the goats, who came running. They would tend to get out if they're hungry.

I spent the night at her house. We got up around noon and were on the road at 1. We decided we'd stop by my house and then I was going with her on some errands. I just wanted to check on the animals.

I pulled up and... I see a dead goat. It was Henry. He looked like he had a seizure from poison. His belly was distended and green goo was coming out of his mouth and nose. I call for Blake, but find him also dead. He was lying by the gate, trying to get back in. He also had green goo.

I freak out. Luckily my friend was there. I ended up calling my older sister, who lived in FL. She tried to all about a livestock disposal service, but had no success. She did suggest covering them up with sheets though. I found two comforters instead, and weighted them down with rocks. I figured the comforters were better because they are thicker and more protective in case a vulture sees them or something.

I stayed around the house for a while, trying to distract myself, but then my friend and I got into her car and just drove. We drove through Reidville, Burnsview, to the edge of Simpsonville but turned around and went through Batesville and ended up on Pelham Road. We got a fastfood dinner and then she took me home. But we just wanted to... get out. She drives when she's stressed and I just couldn't be alone.

I was unable to sleep. Mallory, the mother cat of our probably 13 or 14 week old kittens, was missing. She's an outdoor cat, but I usually see her at least running across the yard or something. I called some people and talked to them, getting off the phone around 2 am. Then I watched like three movies because I couldn't relax.

At around 6 I went and checked on the kittens one last time, and looked at Henry, whose shrouded body I could see from the porch. Then I went to bed and probably fell asleep around 6:30 am.

I woke up like a shot at 9am. I thought I heard someone in the driveway. My first thought was my parents, so I looked out the window but saw nothing. I went on the porch... and Henry had been uncovered!

I retreated inside, locked the door, and prayed.
God assured me I could go outside, so I did. I went and investigated, trying not to be sick. Three rocks were removed and the weather was mild so it wasn't wind. I didn't see anything running from the body and there were no marks of any kind but what had been there yesterday, so it wasn't animals.

Therefore there had been an intruder in my yard uncovering his body.

I covered him back up, went inside, and, trembling called my sister again. She talked with me for an hour, but had to go. I kept checking on the body throughout the day. My nerves were SHOT. I couldn't sleep, except fitfully, jerking to consciousness at every noise. I found if I put on DVDs, even if I didn't watch them at all, my nerves lessened. So I did that.

I fell asleep at some point. I woke up with the phone ringing around 12. It was my friend. I told her my parents weren't home yet and we talked for just a minute. Within twenty seconds of hanging up my sister called again and I told her the same thing. Both were checking on me.

I forced myself to eat and tried to sleep because even though it didn't help, it was better than anxiously waiting. I was constantly praying, but the anxiety only slightly lessened.
I fitfully slept, waking at four and then at six, BANG BANG BANG on the door.

My parents were home.

They asked "Which is that, Henry or Blake?" and I had to tell them both had died. They were shocked. I hate that I had to take away any happy relaxed feelings they might have gained on their vacation. They had to take the rental car back, so they left right away, coming back around 8.

My sister had made calls earlier and there are no livestock removal services here, so far as we know. The feedstore says people just bury them where they died, but as I said in my other post, we can't. Since we have to move them, I think we should put them on a pick up truck and bring them to the humane society. The humane society will cremate them for free (it's a fee to keep the ashes, though). We don't own a pick up truck though.

The goats are still out there, but one way or another they'll be taken care of tomorrow morning. We know we can't wait any longer than that, or the health department will probably be out here.

Then it got worse. Mallory, the mom cat, came back.

She came on the porch and ate... and then started screaming. And delivered a bloody discharge she ate. We thought she miscarried. Then she ran away outside again.

And then hours later I was taking out trash and there was a kitten in the middle of the driveway. He looked big enough, but maybe he was premature anyway? He was cold and it looks like he had a scrape on his head.

So we think she delivered the kitten in the driveway, maybe, and then left it there when she realized it was dead and came onto the porch. Only, then I was thinking how we probably would have seen it and maybe she gave birth elsewhere and was taking this one to us because it was sickly (since we're taking care of her other kittens) and left it for us and went back to other kittens?

I'm thinking maybe when she came and ate she had just finished giving birth elsewhere and needed food desperately?

So we just have no idea. We've not seen Mallory since the afterbirth incident on the porch.

AND Devlin, one of the kittens we've adopted, figured out today that he can get out of the porch the same way his Mom does. So we taped the hole shut... but now Mom is plagued with the idea of what if Mallory is weak out there and needs us adn she comes and can't get in? But if we untape it, the kittens could get out and be hit by cars or something?

Why does everything happen all at once??
Posted by Pamela M M Berkeley at 10:40 AM