The Weakest Human Being Alive

I'm not doing so well. I'm trying. And I know that counts. But not hard enough. I'm trying to try, and I'm not doing so well.
Earlier this week I went on a trip with Tabitha to Myrtle Beach and Florence. The second day was fun, but the first day I fought with my friend. We never fight. And I fear I failed miserably at shining Jesus' light. But the Christian life is about endurance and hope, not high flying perfection, so onward I go.
After fighting all the way down, we got a hotel room in Myrtle Beach. The next day we went to the aquarium.
Then on the way home we stopped in Florence and went and saw my sister and went to the planetarium there. 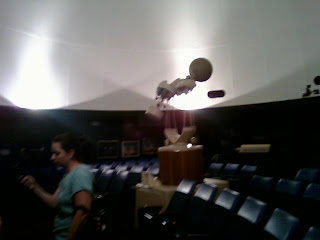 Planetarium at Francis Marion University.
On Friday Bible Study was about grief. It was on Psalm 102. It was hard, having to think about grief for the hour and a half or two hours or whatever Bible study is. It's not that I haven't grieved. I have. But just in short tiny bursts. I haven't dwelled on it like that since at least two weeks after. I ended up writing a poem. I'll post it later. I haven't typed it up yet. I read it at the end of Bible study. There was... a palpable silence. Obviously it was effective. Of course, part of that was the emotion that I couldn't keep out of my voice, though I tried. Still... part of the reason the grieving process has been hard is I've been alone. Now, I don't want to talk about it. But I've seen Bible study rally around its members in their time of weakness and that just didn't happen for me. I got a few mumbled condolences from about a fifth of them. One friend tried to comfort me the night I found out, she took me out, but it was lame and painful. A help, a great help, but hey, anything would have been lame and painful. Still, it was probably a little more lame and painful then it had to have been because she was trying to "cheer" me up and do "fun" stuff.
There's more to the story then I've blogged. And only four people, well four people in my typical life, know the story. There are few friends in cyberspace I've told, and across the pond, but only four otherwise. But even though it's complicated and I don't want to open up to everyone, doesn't mean I don't need people. I don't know what I need from them. Just to know they care, I guess. I know those four care. I know some other do too. But we pray for all these people in Bible study going through things not as tragic and no one ever mentions me.

Please understand: I'm not mad at them. A tiny bit hurt, but God's doing something with me through the process. See, I think I blogged about it before, but God's showed me stuff about my past and, I think, my future.

As a kid, I didn't really have any friends. My social skills are effected. I'm clumsier then most adults, I think. I have friends now, plenty. But anyway, back then I'd long for just one true friend. See, any friend of mine would get picked on for being my friend back then, and eventually the peer pressure would get too much and they'd stop, often publicly ditching me since that was a way to get back in the in crowd's graces. And I was a smart kid, I knew those mean kids weren't really their friends anymore then they were mine. But they were the kids with power, so my sort of friends caved into them. And I used to wish I could say too them (but had enough social understanding to know I couldn't): Can't you see? Can't you see that you only need one real friend? More is nice, but one real friend is worth so much more than hundreds of fake friends. Please, just be my real friend and I'll be yours. We can ignore the rest of them!
But that never happened. I only got real friends after the pressure was off.

But I remembered that when I was Kansas City and God revealed that my past happened that way for, among other reasons, showing me how Jesus feels. How often we cave into the world, the fake friends, and hurt our beloved Jesus!

But the other thing I realized is: as long as I have one true friend, I'm okay. I want to have more. I want to know my friends are all great and they'll never betray me. But look at the disciples. Not just Judas. He's so famous for it. But even though his other friends didn't turn Jesus in, they ran. They didn't stick by him. They weren't "real good friends"... but they're still my brethren, my fathers in the church. They are the apostles and other first century Christians, present at Pentacost! Peter denied him! But he's St. Peter! Things happened the way it was supposed to, despite Jesus's pain at their betrayal.

And so God showed me something I'm not sure I wanted to realize, but I think is important to know about my future. It's possible for Christian brethren friends to utterly betray you and it still be God's will. But I'm also assured that no matter what happens, I've got Jesus.

Anyway, the reason I say it is not to say "The Bible Study people will betray me!" because I hope that's not true. What I am saying is I've come to rely on them, and having them fail me in this is, I think, God's way of making sure I am leaning on Him, and not just them. As a kid, I was just a baby Christian, just receiving God's promises but not knowing what to do with them. As a college student, I was embraced by and fell in love with God's people and God showed me the beauty and wonder of His Body and His Will for it. As a post college adult, I think God's showing me how to rely on Him even when the Body's unreliable. It makes sense, if you think about it. God's called me to help unify the Body. If the Body didn't need unifying, it'd be totally reliable. But since it does...

I'm not saying God's teaching me to be without fellowship. It's utterly essential to seek it. But I am saying that my faith is telling me He's making sure I'm leaning on Him and on them, so that if they suddenly drop me, I don't fall. Stumble a mite, maybe, but no face plants. :)

I can see the lesson, I think. And I'm trying to remain open to whatever else He has to say.

But I'm not doing so well. Not just cause of grief. It's been since the trip. Worldliness, I think. I always fail utterly when immersed in the world.

Did I ever tell you I'm the weakest human alive? It's totally true. Paul said he was the worst sinner. I'm the weakest human. I've never, in living memory that goes back to when I was two, not known God. So, even though I've been ignorant at times and rebellious at others, and failed probably more then I've succeeded, I've never had to live without relying on Him. And the one day I decided to try it, the one day I woke up and deliberately said "I'm turning away from you, God", is the day I almost committed suicide that evening. Seriously. ONE DAY without God in my whole life, and it was the worst day ever. And I know for certain, now, that God's the one who cleaned me up and brought me out of that depression. For a while I thought He was mad or something and I was having earn my way back into His graces, but finally I got close enough to Him to realize He was the only reason I survived at all. That every moment in the two years afterwards it took me to get back good with him, He was there just trying to clean me up from the horrors me and the enemy had done to me in that depressed time. He was always there, holding me in the palm of His hands. And in fact, I am convinced the only reason I didn't commit suicide was because God stepped in and said This was belongs to me. I had given my life to Him long ago, He had plans for it, and it wasn't mine to take. Praise you Jesus!!!!!!!!!!
But so, I am the weakest human being alive! How many people spend decades without God? But me, I nearly don't survive one day.

But I take great comfort in the fact that when I am weak, He is strong. All the strength you see in me? That's Him. And all the weakness? Me. (the meekness is Him though. Meekness is a good thing).

Pray for me, would you? Oh! And for my dear friend from college whose father is ill and probably dying. I tried to call her today but she didn't pick up and she apparently doesn't have voicemail? I heard about her on Friday too and that's definitely weighing on my heart.
Posted by Pamela M M Berkeley at 12:13 PM