I blog like I live. In spasdic spurts, but with the hope that as I persist I will become more consistant.
I am feeling very attacked at the moment, in the Spirit sense. My parents are playing RockBand2 in the room. The music is just awful. Not musically, but the way they grip my mind and try to invade. I wake with the songs in my ears after a night of sleeping. They are invasive and they just GET to me. My parents got RockBand2, and shortly after RockBand and Guitar Hero: World Tour this past January. Shortly after they got it, God convicted me against playing with them because of the affect of the music on my mind. My mother just doesn't get it. I tried to explain it to her, and she'll just say "Okay... well, this song isn't too bad. Well, yeah, it talks about sex, but it's rock and roll!" or whatever. And the sad truth is I'm not sure that she doesn't get how they grip and infect my mind, but more than she enjoys that effect.Still, I am in the room while they are playing it because I don't know where else to go.

Lately has been wonderful and not. I need to rewind back to 11/6, had Bible study. Very good. Then on Saturday, 11/7, I went and spent the night at Lydia's house, so we could leave early in the morning to go to Charlotte. We're both friends with the Vangnes family, three of whom were in a car accident. The one most injured, Jeremy, is in a hospital in Charlotte. He had been in a hospital in Spartanburg and I didn't get to go see him, then he was transferred to Charlotte. So I had asked Lydia that if she planned on going to Charlotte to let me know, so I could see him.

So she was planning to go up there on a Sunday and texts me at 1am on Friday night to tell me. I respond the next day and say that's fine. So I spend the night on Saturday so we can leave early in the morning. After I'm there, she tells me we're first going to church in Charlotte in the morning. The non-denominational Christian group she was raised in were having a conference in Charlotte. The Sunday meeting was the capstone of the experience before everyone dispersed. She didn't go to the conference in general, but wanted to be there Sunday.

It was wonderful. There is no local church of her tradition in Spartanburg, and even though she and I have been friends since 2004, I'd never been to any event with her church background. So I was excited and up for it. It was great and I loved it. It was funny, actually, seeing all these hints of what she'd told me about them come together in a big picture. For example, it had come up in the past that her church said "Amen" a lot. But I assumed it was the shouting, waving your hands at the ceiling, giant southern revival tent way. But instead it was more quiet, but still very frequent. People would say Amen sometimes where I didn't think an Amen was appropriate. "Amen" means "So be it" and sometimes someone would say something to which "So be it" didn't make sense. So I started saying "Alleluia" instead, which means "Praise God" and is ALWAYS appropriate. ;)

It was many little things like that, coming together so I got a far more coherent picture of the way my dear, dear sister in Christ was raised. And I found it primarily healthy and in Christ. She seemed nervous about how I'd interact with people, but I could recognize that that which is in me is in them (the Spirit of the Lord) and felt at ease and delighted for the most part.I met a few people I'd heard Lydia mention and I finally got to put faces with names at the lunch after the meeting. It was awesome.

We left the church and went to the hospital and visited Jeremy. We got lost. Actually, we'd gotten turned around getting to the church too, and had gotten pulled over by a cop at one point. lol. We always have adventures even in the simple things like navigating when we're together! (No tickets were issued) Lydia brought her guitar and we sang praise and worship songs to Jeremy, who was present, but unable to really communicate with us. 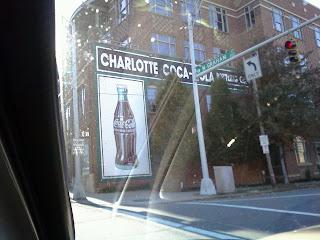 Mural in Charlotte I took a picture of on the trip
It was the first time I have gotten to see him since prior to the accident. My friend had seen him when he was in Spartanburg, and she says he looks much more relaxed. We sang to him and prayed and read scripture. He clearly recognized us, making eye contact and trying to communicate, but wasn't able to. We talked with his roommate and family, and found he had come to Christ the week before. :) It was wonderful meeting a new brother. 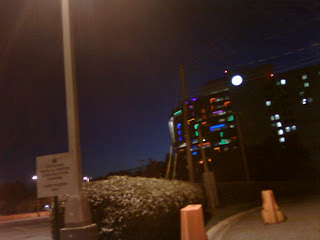 Building with cool lighting I took a picture of as we left Charlotte.


On the way back, Lydia was tired and we were both hungry so we tried to stop for a meal and caffeine. Of course, it couldn't be simple, and it took us like 45 minutes to get to a Burger King. :)

I was in a great God place. At that Sunday meeting, God had worked on me and my pride, humbling me in a gentle and necessary way. (But it's still hard). But I felt reinvigorated for Christ, alive for Him, like nothing was too much. Which, of course, is Truth.
But the week wore on and I fell once more into sinful habits! Oh how my evil mind plagues me! I am so depraved. I also was at a loss to know what to do when my friend I go walking with, her marriage is once again deteriorating, but this time it seems even more serious. I would never wish to council someone to end their marriage, and yet his infidelity... anyway. By Friday, I felt once more listless and out of it. But I went to Bible study and was once again ministered to through the gentle fellowship I find there. But today... I'm drooping again.

Tomorrow I am supposed to go once more with my friend to church, this time in Simpsonville. I can't get ahold of my friend to have the exact time for the morning that she expects to pick me up. Afterwards, I may meet up with my friend with the troubled marriage.

I'd appreciate prayers. My endurance is bleehhhh. lol. Thanks.
Posted by Pamela M M Berkeley at 9:03 AM