Creative title, I know. I've been thinking about this post for a while, but didn't want to do it until the year was really almost up.

It's not heartening that no one at all left a comment on my "is anyone there?" post, but I didn't really expect an inundation. But I was hoping for like three to five replies. But even so, I'm going to persist because I really do enjoy blogging.

So... this time last year I was 22, engaged, employed and had dreams of moving out within the year.

None of that is really true anymore. Well, I still dream, but the reality seems highly unlikely.

So I've been laid off, found out about my fiance, lost three pets, gained more. Two of my friends got married... but I didn't get to go to either wedding. I got to go to Kansas City and had a few small trips to NC and one to Myrtle Beach. I had an amazing time in the late winter/early spring with God. Oh, I ache for those days God walking in Spartanburg with Jesus. But Mom's not working, so I never get up there anymore. You can't exactly call a friend up to say "Hey let's hang out... just drop me off downtown alone and pick me up in five or six hours". :) 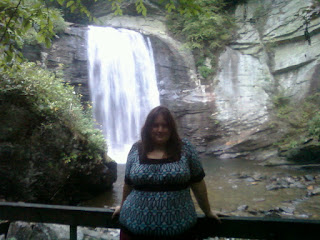 Me, at Looking Glass Falls in Pisgah, NC, on a trip with Tabitha.
Spiritually it's been so up and down. Really down right now. Really, really down. But it's been three weeks sans any real fellowship and I'm just not disciplined enough to maintain a spiritual high without my brothers and sisters in Christ. I'm just not. I confess this weakness and ask for help. And Bible study was cancelled on Friday, though weirdly enough they held it on Christmas DAY (and I didn't go). I'm hoping it'll get on again. The woman who hosts it cancelled, but a fourth of the time it's held elsewhere anyway. I've not really gotten to talk to anyone this week about that. I was woken up this morning by a phone call telling me it was cancelled.

I really, really need to put this year behind me. Overall, I feel like it SUCKED. But God wants us to absorb the good things he gives us from our pasts, to take those out and treasure them, and leave the bad things there forever, never to dwell on them but to forgive and move on. Worry is a sin, as is complaining. Which I am far too wont to do. Seems like if I'm not complaining I'm prideful, if I'm not prideful I'm self loathing, if I'm not self loathing I'm slothful, if I'm not slothful I'm unkind, if I'm not unkind I'm selfish, if I'm not selfish I'm complaining... And that's the sin that creeps up on me, not the sin I know I'm doing when I'm doing it.

I so need a Savior.

And any and all prayers are welcome. I pray for you sometimes too. Just general prayers for those who find these words.

The Christian life is endurance and transformation. I know this. I'm trying. But lately I feel like I've got no purpose, no vision, and every hope I have is being negated at every turn. Except for salvation.

And I'm afraid. Another sin, a crack in my soul which lets the enemy in. I'm afraid of the future. So stupid! I know my Lord has a plan. But if I fall apart like this now, how much worse might it be later when my best friend is gone? The one I fellowship with on Sundays? I know Jesus will provide and He loves me and delights in delighting me. I promise I believe that. But help my unbelief, Jesus! And I'm afraid of failure or success. I'm not sure which. I don't want to be on my own. And yes, I never am, but while one part of me aches to be out of my parents house and on my own, another part of me is terrified of the same thing. It's very internally stressful. And I'm afraid of a job, and afraid of being a lazy moocher. And I worry about all this.

And it just shows you how far you can fall, you know? I had nipped fear and worry in the bud! Seriously, there was a time there that if fear or worry came into my mind, I would instantly identify it, instantly confess it, and it was done! And now it's infiltrated me. Gosh.

I can only hope instead of shrivelling up I've been pruned. I was talking with a friend of mine about the spiritual process of pruning and I had this awesome insight. You know when you're relearning the same lesson you totally thought God had already taught you but you're so crappy at it? Well think of pruning a plant. That branch already grew those centimeters. It's been there, done that. But now it has to again. But in doing so it gets stronger and the growth is that much healthier. That's what I've GOT to hope is happening.

And I know I'm learning humility... and failing miserably. There's nothing like moving into your parents house after living away for four years to make you have to learn humility. Seriously.

Happy New Year internet world. I love you and I hope 2010 is better for everyone!
Posted by Pamela M M Berkeley at 12:45 PM