Yesterday I talked to two dear friends of mine who are married. Well, I talked to both of them later in the conversation, at first it was just me and the wife. And we were talking about marriage, and she was reflecting on how she hadn't really had good examples. Her parents are divorced, and her grandparents hate each other. She's got an aunt and uncle that are happily married, but both of them first had a few divorces before they found each other. 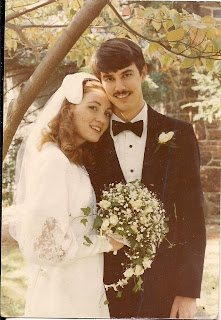 My parents on their wedding day.
And I have to reflect once more on how blessed I am. My parents have been married for over 29 years, happily. My maternal grandparents more than 55. My paternal grandfather died when my dad was a baby, so while his parents weren't able to model a successful marriage, it wasn't a negative example either. My mother has four siblings: one aunt is now a widow, but had a happy marriage of, I think, fifteen years (he died of lung cancer); my uncle was divorced in his youth when his wife left him, but is now happily married for over a decade; another aunt will be celebrating her tenth anniversary later this year; and the last has been married for around twenty years. My father's sister and her husband have been married for 36 years, I think. My father's brother's history isn't quite as happy. He had a divorce in his youth, then his next wife died of cancer. After that, he decided marriage wasn't for him and has lived with several women over the years. However, he and his current girlfriend have been happily together for around nine years, I think.

And I include my friends I originally mention in the good influences on my life. They've only been married for less than four years as well, but they are still a happy marriage.
And I think of them, and of my friend Tabitha and her husband (who have been married around 18 months), and realize how important good models of marriage can be...

Tabitha's parents were not married, and she was raised by her cousin. That cousin lived with a man for years without ever marrying him until they realized he needed to be able to take advantage of her benefits, so even though they've been together for a long time they're not exactly pillars of commitment. There are actually no examples of long standing, normal marriages in her life. And her husband's parents got divorced, and then his father died, which only injured his relationship with his mom. They are a young couple now who have had a very rocky marriage, though they were starting to build a healthy foundation for their life together when her husband just had a serious medical emergency and may need brain surgery. Craziness. I can only hope this challenge will bring them together...

It all humbles me, and makes me so thankful of the fact that I've never doubted, my entire life, that a happy marriage is possible. I was asked, in an online survey thing, what my greatest fear about marriage was... but I had to choose 'other' because I have no great marriage fear. I suppose I get a little anxious about the idea of going into a marriage with a guy not as capable of commitment as I am, but I just trust in the Lord and don't fear. But I know if I can find a guy as committed to the cherished, amazing, sacrament of marriage as I know I am, we'll make it. It's not that I don't think it would be hard. I just know marriage is permanent. And that just makes me happy, not scared like it seems to do to many of my generation. If a marriage sucks, you work at it. You make a lifelong, binding commitment. Two become one. You can't ever be two again, you're only half. Which is what is so horrible and scary and terrifying about divorce. It's why every study shows that kids do better with parents that are together.

But they persevere. And my mom and dad still kiss when Dad gets home from work, and enjoy going on occassional dates, and romantic vacations every year or so. (Admittedly, they couldn't really do those things when we were little, but they started doing it more when we got into high school and beyond). My parents are best friends, and deeply in love. My mom still thinks my dad is the handsomest man she's ever seen.

And I'll never forget the tone of my grandfather's voice when my grandmother almost had a heart attack. Well, later, when he was telling us the story. His voice cracked with deep love as he said 'My Kathy..." and the love was so tangible.

I wanted to share this with you guys, because when I told my friend about my parents she said 'wow! After 29 years? That's so encouraging!'

And I realized that it really is! And some people just don't know that marriage can and does still work. If fifty percent of all marriages end in divorce, it still means fifty percent don't (though they're saying, actually, that marriages are having a better success rate now then they did in the nineties). Now, if you live before you get married, or you get married before the age of 20, you have a much greater chance of divorce (70% more likely if you live together first, 50% more likely if you marry in your teens), but it's still possible to work! And that also means if you wait until you're at least 20 and don't live together first, you've got a much higher chance than a 50% divorce rate, because that's the average of ALL marriages-- if you remove the teen marriages and the ones who live together first, the average would be much higher!

So I hope this blog entry encourages at least one person that successful marriage is possible, and worth working on. I look at my parents and grandparents... it's really worth it!