of Eyes and Guys 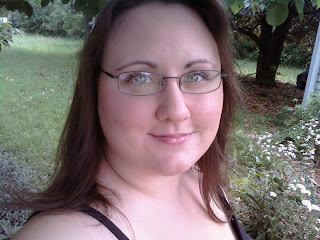 Me with my new glasses!
I have a pair of glasses perched on my face. My first pair. Well, I have two pairs. I went to America's Best and got that two pairs for 69.95 deal they offer. One is definitely cuter than the other, though I still catch a glance of myself in the mirror when I'm wearing them and go 'what?' because for the past 24 years of my life I've been glasses-less. I'm only slightly nearsighted though, and don't need them much. I've got 20/50 vision, which is just barely anything.

I also have met a guy. His name is Stephen. We've got a date on Saturday. We've been talking on the phone for several hours for the past few nights. We met online at a Christian dating site... which isn't so weird anymore, apparently. According the match.com commercials anyway, 1 out of 5 relationships start from an online dating site. Now, I don't know if that's accurate, but it sounds good. :) Stephen is the cousin of a girl I went to school with, who confirmed his identity, so that makes me feel good about that. I've had bad online dating experiences in the past.

I want to talk to my friends about the new changes in my life, but apparently can't. Lydia I can only talk to on Mondays, and Stephen and I made the date Monday night, so I have to wait until next Monday unless I want to tell her in a text message, and it's more fun to me not to do that. I did get to tell Tabitha, but she snapped her phone in half accidentally and so I am having trouble getting ahold of her, and so I've not gotten to talk to her more than a minute about it.

I tried to call Grace, but her phone is not accepting incoming calls for some reason. So I texted her husband and my friend, Jacob, to ask why her phone wasn't working and I've not heard back. Then I've been trying to get ahold of my friend Jennifer for a long time now, but she facebooked me last week to say she'd call me this week and she hasn't. I tried calling her yesterday, but got her voicemail. I haven't tried Adela yet, but that's just because I keep thinking of her at odd times. Maybe I'll try her after I get offline. And I've not gotten to tell either sister because I also keep thinking of telling them at odd times, when they'd be at work. It's like yay, there's a guy, but hey, where are all my friends? lol.
Posted by Pamela M M Berkeley at 4:16 AM