I think it's time to talk about babies

Because I seem to be surrounded.

Or at least by people growing them.

It may have started last year when Stephanie and Jeff from Bible Study had their son, Luke. But I know it really hit me when Grace and Jacob announced they were pregnant. They just had their son, Daniel, on Friday. I am so excited for them. 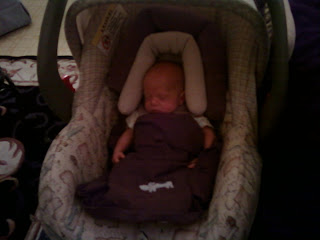 Baby Daniel!
Then Jane and Darryl's oldest son gave them their first grandchild, Chloe in June. They also go to Bible Study. They're actually the ones who give me a ride each week.
Then Hannah, who was one of my best friends in high school (though we really on talk on facebook now) got pregnant. She's 19 weeks along right now.

Then Lydia's sister Esther got pregnant. She's about four months along.

Then my cousin Kirk and his wife Deborah just announced that they're pregnant! She's due in May. They only got married this past May!

Additionally there's several other people on facebook who are pregnant.

So clearly, I am surrounded.

Grace was my first close friend to have a baby. (I've had other friends, like Stephanie, have babies, but Grace is the first *close* one.) It really hit me. And now I think about babies. And not just think about them, they seem to be mentioned all the time! For example, I've started following A Practical Wedding, this awesome blog, and she just did some killer entries on having kids or not.

Before, I liked kids, but I was 'eh' about babies. Actually when little Luke was born, I was like 'oohhh, he's cute... okay, I'm done now.' Well, I didn't SAY that. But he just didn't enthrall me.

But now I really like babies. And it's weird.

Ryan and I talk about having kids. By the normal way or adoption. Or really, and. Cause I want to do both. But I think that's for another blog entry.

Understand, I mean we talk about having kids in a hypothetical future where we're married, not now. Anyway, things have happened to distract me since I started this post, so I shall leave it as it is, even if it's more a compilation of events then my opinions on said events.
Posted by Pamela M M Berkeley at 3:09 PM