Can you believe next week is Thanksgiving? It's crazy. Time is going by so fast. Tabitha finds out what her baby is this week. (She's at 20 weeks- that's halfway through her pregnancy!)

Alison, my younger sister, is coming home for Thanksgiving next week. Otherwise it's just Mom, Dad, and I (though Brad, Alison's fiance, will probably make an appearance or two, he'll eat the big meal at his parent's house.) Beth, my older sister, doesn't usually come for Thanksgiving anyway. She lives in Florida, with her husband Daniel. Alison is a college student in Florence, SC. Brad is a graduate student in Florida (but a different part then Beth and Daniel). This Thanksgiving Beth and Daniel, along with Daniel's family, are traveling to Athens (Greece) and Cairo (Egypt). So she definitely won't be here! She and Daniel are world travelers. Their last trip was to Palau and Micronesia, and Beth went on to South Korea with a teacher's program (Daniel went home to work). That was this summer. Beth is going to Paris in January or February for a training program for teacher's hosting international trips or something like that? Then Beth and some of her students, along with Daniel who will be one of the chaperons, are going to Italy in March. Pretty awesome. 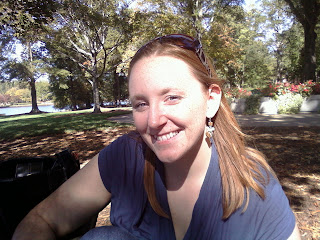 Beth, from a recent visit.
But anyway, back to Thanksgiving. Ali's coming home, and then afterwards, I'm going back with her to Florence. I'm going to stay at her apartment for a week, for a change of pace a little sisterly bonding (though not too much, since she's in college and it's approaching the end of the semester.) This is her senior year.
Aaanndddd.... it's her birthday next week! It's next Tuesday. She'll be 22. Which doesn't sound that wrong, except when I think that I was 22 when I graduated college, which seems like not that long ago at all. But Beth being 26 is crazier to me, and she's been 26 since March. But life marches on, I guess.

I realized today it's been six months since I regularly exercised. It's not that I haven't exercised at all, but it's been few and far between. See, I had been doing like exercise videos (that I'd DVRed off of FitTV), Wii Fit Plus, and would go walking and to the gym with Tabitha. Well, lightening hit the tv like six months ago or so, and took it out and the DVR. We didn't get that fixed/taken care for months. Then Tabby and I didn't get together except one or twice for the gym for the next month or so... then Tabby found out she was pregnant. And that limits what kinds of exercising you're allowed to do, and we've barely gotten together to exercise since.

I'm not saying that's valid excuses, that is, I also have a stationary bike I rarely use I could have been using, and I could have been taking walks near my house. But I haven't much. And my tv and DVR and wii have all been back for at least three months. But since I was out of the habit, it's been hard to get back, and indeed, I have not gotten back. But I'm noticing I'm really flabby. I'm big, and always have been. I'm not one of those people who 'let themselves go'. I've never been a normal weight my adult life. But I have had periods of being active, and periods of eating right. And this is not one of them. I can't really do anything about the food. Since I'm unemployed, I don't have any money to buy food, and Mom and Dad do that. And like with everyone now, money is tight. And the easiest way to cut your budget? Food. So like probably around the time I stopped working out, we had to switch from whole wheat back to white bread. Which you might think the price isn't big, but the like 80 cent difference is enough to buy like a canned food item or something that can stretch out one meal into two. That's not the only way we've cut back, but my family doesn't eat that healthy to begin with, and that's one of the few strides towards healthier eating we'd made.

So right now, changing the diet is not really in my hands (I can choose not to eat something, but without a substitute, it's hard to have the will power), but exercising is!

I've been crocheting a lot. It's satisfying to make something with your own hands. I'm working on presents for like Christmas and stuff. It's in my budget- since I already own a lot of yarn!
Posted by Pamela M M Berkeley at 12:50 PM