The next weekend was Christmas. On a typical Christmas Eve, my older sister Beth and her husband Daniel come. Christmas Eve is Dad's birthday, so we get Beth then, and Daniel's family get them for Christmas, especially since they still have grade school aged children. But this year, Christmas Eve wasn't going to work, because of timing. So we decided to have it the Sunday after Christmas. So Alison and I gave Dad his birthday presents Friday, but otherwise nothing really happened, except lovely holiday lasagna for dinner. 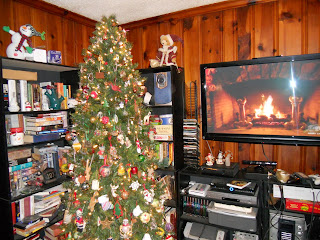 Our Christmas Tree.
Christmas we did what we normally did: open up gifts in the morning, then chill the rest of the day except for dinner, which was turkey and the trimmings. It was great, except over very fast because Mom and Dad had given me most of my gifts pre-Christmas, Alison's gift to me was the Florence trip, and Mom and Dad gave Alison mainly cash. We watched a few movies, it was great...
And then it started to snow! And it stuck! First white Christmas of my life!! Yay! 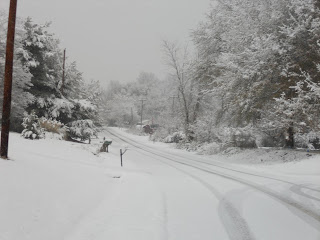 Road in Front of My House!
And it kept coming and kept coming and consequently it wasn't safe for Beth and Daniel to come Sunday. So they came Tuesday instead.
Tuesday was fun. And my mom got a laptop! I had no idea, but Beth, Daniel and Dad were all in on it. She'd also gotten a great digital camera, so she's like all technological now!

Beth and Daniel only stayed for the day, which is always a bummer because we'd all like to see them more. But it was a great visit.

Wednesday Tabby and I were going to hang out, but she didn't feel up to it. Thursday nothing in particular happened. Friday, yesterday, was New Year's Eve. Brad came over and we played games and watched TV. At midnight, I talked to Ryan. :) Brad spent the night, and then today Alison and Brad left. They're having dinner at his grandparent's house, then Ali's spending the night at his parent's house so she can be there to see him off tomorrow, when he head backs to Florida, where he's in school to get his PhD in Computer Science.

You might wonder why you've not heard Ryan's name, but it's not because he wasn't there. We're going strong. In fact, it's only four days until our sixth month anniversary! (Well, our sixth monoversary if you want to get technical.) These sixth months have flown by. We talk pretty much everyday, though not as much as we'd like. I've been very busy this month, and part of it I was on pretty much the worst schedule I could be with a boyfriend in India. But overall, we've been great. I admit, I am sick of talking on the phone. I just don't always feel like talking on the phone, but that doesn't mean I don't feel like being with Ryan. But it's pretty much my only option. Before, we talked online and on the phone, but today is the first day I've been online in forever.

Ryan also had a setback this month. He's been saving like crazy for about four and a half months to come and see me... and then the family's only car died and he had to use his savings to fix it. So instead of February, like it was looking like he'd be able to come, it'll be at least April. It's conceivably only a two month setback, instead of a four month one, because his family is going to help him out a little and he's getting a raise in February.

Spiritually, I've been only okay. Except that one spirit filled weekend, I've been just sort of barely chugging along. Ryan and I have tried to spiritually bond more, but it's not succeeded, which is distance more than anything else. It's hard to pray and do Bible Study and all that stuff over the phone-- we've tried, but it's just not the same as it is with people in person. And I don't know about him, but sometimes the most spiritual things happen in silence with me. A poignant, prayerful silence is powerful in person. Over the phone, silence is just nothingness, or worse, it makes the other person believe something is wrong.

Physically, I'm starting to exercise regularly again. In early summer, I'd been doing pretty well. But I lost my primary workout methods (DVRed episodes of FitTV programs and Wii Fit Plus) when lightning hit. I didn't get them back until fall. Before that, I also lost my secondary workout methods and workout buddy when Tabby got pregnant! So it hit me at the end of November or so that I'd not worked out regularly in sixth months! Since then I've been trying to get back on the horse, but I've been so busy that when I think about exercising I usually don't feel like it and am unable to talk myself into it. Still, I exercised today and I'm on the road back to regular exercise. I feel so much better right now than I did pre-workout, even though it's been a few hours since I stopped.

Tomorrow I'm hoping to hang out with Tabby for the first time in like... three weeks? Is that right? At least two and a half. She's right around her third trimester now. Not sure if it just started, or is just about to, but she's getting bigger. I don't remember if I told you, but she's having a little boy! His name will be Jordan.

Later this month, around the 15th, Lydia and Suzanne, a woman from our Bible Study, should be going to Atlanta. Lydia made plans for that weeks ago, and I've not heard anything about it since, so as far as I know that's the plan, but we'll see as it approaches.

It feels good to blog. Currently I'm on Alison's computer, which will go back to Florence with Alison later this week. This is the first time I've gotten on it since she's been here, and so I'm not sure I will again, but maybe. Dad's computer is going to be fixed, but still hasn't been sent out to be fixed, so it will be a while. But Mom's new laptop does have a modem, so maybe I'll get on it if she'll allow it. Have a great year, everyone!
Posted by Pamela M M Berkeley at 8:37 AM