It has been a while since I've done a proper blog post. There's a reason for that: I've been busy. My last real post was Thanksgiving, despite the little text post thrown in there. Thanksgiving weekend, my parents surprised me by buying a lovely wool coat and giving me some shopping money as a early Christmas gift.

After Thanksgiving, I went to Florence with my sister Alison, who is a student at Francis Marion University. She has an off campus apartment where I stayed with her for a week and two days. Originally, the plan was a week.

I had a really great time. It was lovely to have a change of pace. I'm not sure I have the chronology right, but I'd like to tell you about some of the highlights. The first day I was out there we did a lot of shopping and went out to dinner. That was Sunday (we'd driven down late Saturday night). On Monday I went with Ali to campus. I hung out in the library while she was in class, then met her professors. Either Sunday or Monday Alison bought this awesome video game called 'Dragon Age' which was actually pretty awesome to watch, as it was like watching a movie, which we played throughout the week. On Tuesday I attended her biology class, her professor having had invited me the previous day. I also attended Alison's senior presentation, which she did very well. In this, I went out to lunch with Alison and some of her friends to Moe's, which interesting enough, was in the local hospital cafeteria. I'd never heard of just going to a hospital cafeteria as if it was a normal restaurant or mall food court. Wednesday brought around Alison's Christmas party. Alison is the president of the Physic's Society and she had planned and executed their first annual Christmas party. She was sooo nervous. She thought it'd be an utter failure up until the last moment... but it was a total success! We had pizza and ice cream (I tried pineapple pizza for the first time and it was awesome!), then we had a game of Apples to Apples and Alison had brought Lips (a karaoke type game) and her Xbox, and it was so funny to see all these guys belting out Lady Gaga. There was also a gift exchange, what is commonly called a 'Chinese Christmas' I think? I arrived with a DVD and ultimately ended up with a Walmart gift card. It was awesome. 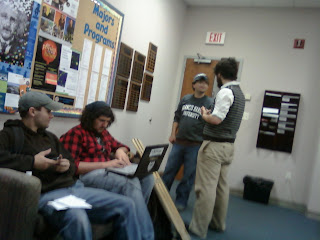 Some of Ali's friends in the physics department.
Thursday I stayed home and enjoyed the wifi. I don't remember what night it was, but one night we got stuck in traffic for forty five minutes or so on our way to Applebees, which is on the end of the road Alison lives on. We never made it there-- by the time the practically standstill traffic got to Ali's apartment complex (we'd started at the other end of the road, not from her home) we turned in and just ate whatever we could cobble together in Alison's apartment. I don't remember specifics from Friday, though Alison was working on a lot of homework and I couldn't really get the internet.
Saturday we went to David's Bridal. Alison is one of the maid of honors for her friend Leanna, who is getting married in July. She was there to try on wedding gowns. It was very fun. After four dresses, we determined she wanted a tea length dress, then we asked if they had any others in her size in stock to try on (because the one she'd already tried on wasn't quite right) and they brought out a lovely dress that not only did Leanna love, it was her size, and it was the last one they had, and therefore was on sale for $99! So even though she'd really only gone there for an idea, not to purchase her dress, she found her dress for real! That's actually happened every time I've gone wedding dress shopping with someone! With Tabitha, we found a dress that fit her like a glove and was only $75 the first day she went out to look for a gown. With Alison, she still hasn't bought her dress yet, but she found the one she wanted when she, my mother, and I went to try some on 'just for fun' (she's still unsure of the date, so she's going to wait to order it until either it's close to the wedding or they decide to discontinue that style). It was, at least when we looked (might be on sale when we order or something, who knows) less than $150.

That night, I was supposed to go home. But I didn't because Alison had 6 assignments due Monday! So she and Mom talked and she realized she could bring me home Monday night, and not have to give up any studying time over the weekend. So Sunday we didn't do much but I watched tv and such. Monday she had class and she got her stuff turned it. I got to see her friends one last time and say goodbye.

So Monday night, Alison didn't have us leave until like 2am because she hates to drive through Columbia area during traffic. So we got home around 4:30 in the morning. Consequently my sleeping schedule was screwed up the next week.

You may ask why I didn't blog during that time, but basically it was because my time online was limited. I did get online, but my priority was to do those kinds of things I can't with only dial up (and blogging is possible on dial up) while I had the high speed. I'd thought I'd get online a lot, but it didn't happen mainly because Alison needed her computer for homework. Aaannd while I was gone, Mom and Dad's computer died! So when I got home, I had no internet at all!
Posted by Pamela M M Berkeley at 7:03 AM