Yes, I’m still writing about last weekend this weekend. I’ve been so behind with my blog lately.  I told you about Ryan and Mallory’s wedding in Thursday’s post, which was the reason for the trip.  Lydia and I left from Spartanburg and went straight to the wedding… well, we’d worn clothes other than our wedding clothes on the way down so we stopped at an Ingles near the wedding and bought a hostess gift.
We had a great time at the wedding, and afterwards we drove to Athens (the wedding was a little outside the city in the countryside) and went to the house of the people we’d be staying with… however, they weren’t home yet. So we decided to hit downtown Athens.
Unfortunately, I hadn’t really thought about walking when I packed for the trip. So I’d just worn the one pair of dress shoes, which had started to hurt earlier in the evening at the wedding. Since it was Saturday night, in the summer, in Athens, the parking wasn’t exactly smack in the middle of downtown. So by the time we actually got to anything worth seeing, my feet were killing me.
We walked around and looked at shops. We went into one clothing shop and didn’t buy anything (but I really liked some of their jewelry, and Lydia saw shoes she wanted… but they didn’t have them in her size) and then continued to wander. Lydia said she wanted to eat something, but all her suggestions didn’t really excite me.  I was somewhat hungry (we’d eaten dinner a few hours earlier, and had danced liked crazy since) and didn’t want to walk a lot so I’d pulled out the GPS and was trying to find a very close restaurant we’d both like… which Lydia found hopelessly dorky. We decided to try to find one place… and didn’t succeed…
By this time we had wandered pretty far from the car, and we’d decided to just spend roughly an hour downtown and it was already half an hour. Then Lydia confessed she wasn’t like meal hungry, and that frozen yogurt would do… which sounded great to me, because I really didn’t feel like eating real food either. We’d passed a Yoguri earlier in our wanderings, somewhat close to the car, so we headed that way.
The guy behind the counter was a hoot.  We split a pistachio/taro swirl (I’d never even heard of taro) and liked it so much we wanted another! Lydia added something to the second one… and for the life of me I can’t remember what they’re called. But as the guy described, they taste somewhat like a mix between marshmellows and gummy bears. They were okay, but I thought the frozen yogurt was better without them.
Because Lydia thought the way the guy had put the whatever-they’re-called on the dish looked like art, we took a picture of the frozen yogurt. Yes, we did. Yes, we’re dorks. 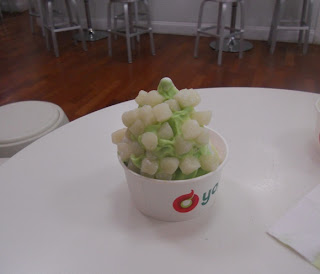 After we finished our second frozen yogurt, we headed out… and my feet were screaming at me.  So I took off my shoes and carried them. This made Lydia exorbitantly happy, because apparently in a previous year she’d done the same thing, so she claims now we have that special bond of walking downtown Athens barefoot.
When we got back to the car we went back to our hostesses house, where I met them. They’re members of the same church Lydia belongs to, only in Athens. I’ve visited the church in Athens before, and I think I’d met one of them. I know I’d met her sister and brother.  We all talked, and then one of the two went to bed and Lydia, our awake hostess, and I stayed up pretty late talking and bonding. I like her a lot. It’s so wonderful to bond with brethren in Christ.
After we went to bed, I stayed up because I missed Ryan like crazy. I facebooked him and he didn’t come online like he normally does. I hadn’t really done the math though, and he was in church. Duh! So by the time he finally came online, I was about to fall over. So I talked to him on facebook for about two minutes, then crawled under the covers.
On Sunday we got up and our hostess made us French toast with strawberries in sauce and powdered sugar. Yum!  Sooo good.
Then we all went to church. I love that style of worship so much! You come in and everyone is already singing hymns (they start pretty much whenever the first person arrives). We all sit in a circle (well a square) around the table the communion will be served on.  If you want to sing a particular hymn, you just call it out! I admit I’m not so keen on the fact that after you finish singing, people talk the words of the hymns… but that’s because I love to sing so much I’d rather just sing and sing and sing! But they repeat the words, emphasizing good truths, and it does help it sink in.  And I think it helps those who don’t enjoy singing enjoy the hymns.
Then we do communion, which is passed-around-with-tiny-cups style.  Then, depending on the church you either start the lesson or you sing some more. We sang some more, then broke and visited a little, then started the lesson. There is no sermon or pastor, though elders lead and guide the whole service, and make announcements if needed. Instead, they learn from a book of devotionals (chock full of the Bible) the whole church has been individually worshipping with each day during the week… OR occasionally, but rarely, they open the floor to whatever God’s been speaking to you that week, regardless of if it fits into the daily devotional. I LOVE that style, it is ALWAYS good, the devotional one is sometimes good sometimes only so-so, but never bad (I’m pulling from many experiences at churches of this style I’ve visited in… five different cities. There isn't one in Spartanburg).
Then at Athens, we stayed and watched a fifteen minute film sent by the national church organization, which was somewhat interesting. Also, excitingly, Athens is sending off one of their members to France to serve with the church there! Today would be her last Sunday, last week was her second to last.
Anyway, it’s very different from most, but it’s a healthy vibrant church and I love it. It was terrific.
An older couple at the church invited Lydia and I to lunch with them, then when they found out who our hostesses were, they invited them too.  We had baked spaghetti with garlic bread and salad, then a brownie with ice cream for dessert. Again, delicious! It was really a great food weekend.
We hung around and visited, and Lydia played with the grandkids who were visiting the couple. Then we headed back to Spartanburg. On the way, Tabitha texted, and that adventure was told about in my post on .
Overall, it was a great weekend, and I loved it. I love weddings. I love Christiand and the church. I love friends, both old and new. And I love adventure. Yay! (Though talking to Ryan more would have definitely made it better, I'll give you that!)
Posted by Pamela M M Berkeley at 4:22 AM