Lydia and I had an amazing two day camping trip! 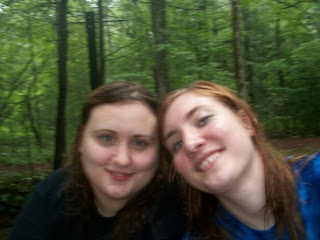 So the night before I was supposed to pack and I realized there wasn't enough hours for that and sleep. I have a tendency to underestimate how long things take.  I started freaking out. I wanted to text Lydia and tell her our 9 am departure time was unrealistic and we should aim for 11... But neither Lydia nor I have a cell phone anymore.  And I couldn't exactly call her housephone at 3am. So I was stuck.

I did end up getting one hour of sleep. Part of the problem was it stormed overnight. I'd planned to go out to the car and get some stuff, look for somethings in the garage (which is detached, so you have to go outside to access), and take a shower. All of that had to be put off until the morning.  When Lydia arrived at my house, irritatingly on time, I wasn't ready.  We didn't leave my house until 9:45...
But ultimately that didn't matter. We got up to the campsite at about 11:30.  We were staying at the Davidson River Campground in Pisgah National Forest.  Technically check in wasn't until 4pm, so we'd planned on doing something like a small hike or taking pictures from an overlook until then. But Lydia thought we should at least check and see if maybe the campsite was already ready... and it was! So we were able to set up camp before lunch, have lunch and hit the campground's swimming hole.
It was so much fun! After we swam and jumped off the jumping rock a few times, it began raining. I wished I had a waterproof camera several times during the trip, and this is the first one. It was so cool, the way the rain fell into the river. It was pouring and it was beautiful.  We all continued to swim, and laugh (there were always at least a couple other people at the swimming hole besides us) until it began to thunder. Then, grudgingly we left.  By the time we got to our campsite (only like a two minute walk away) the storm was almost scary in intensity.  I was very glad I had thought before we left to put anything that shouldn't get wet in the car or tent. It had been bright and sunny and it wasn't that I thought it would rain: it was just that the last time I was here it stormed most of the time (when I was in high school.)
So Lydia and I make it to the tent with grateful thoughts of warm, dry shelter... only to open the door and find our blankets, suitcases, and other things were completely soaked! Apparently the tent definitely needed to be re-waterproofed before we went (something you should do to your tent every other year or so!)  It was pouring in.  After gazing in open mouthed horror at the puddles and soggy belongings, Lydia and I looked at each other... and burst out laughing.

Lydia had brought her guitar and djembe, and we passed the rest of the storm perched on rolled up foam mats and singing praises to God. Oh, and emptying buckets and pots of water pouring in!
When the storm ended, we decided to go back to the swimming hole, this time with the inner tube graciously lent to us by our friend Suzanne.  Lydia went tubing first, while I swam. The current was much, much stronger with the new water from the storm added.  She went down oh, maybe a quarter of a mile, then got out and walked back and it was my turn.  She warned me it was hard to get to the side, and also attached a pair of flip flops, saying I'd need them on my walk back (little did she know!)

So I set off. I'll be honest, I was only hoping I'd enjoy it, not anticipating I would. I don't really like moving without feeling like I'm in control. Or rather, that someone is... the river made it very hard to steer. It was fun, but I was nervous crash into a rock, or fall out, or something...
So suddenly I realize I'm passing the place where Lydia got out. I'm in the very middle of the river. I try to steer to the right, which is the side of the river you have to exit on (the entire campground is to the right, to the left is only a steep bank).  But the river kept trying to push me to the left.

So while I'm fighting with the river, I realize I can't see any places to get off! I remember from when I was a kid and we did tubing, there was a bridge going over the river and you really needed to get out by then... so I assured myself I hadn't seen that bridge yet as my adrenaline rose and I prayed.  Just not in my comfort zone!

Suddenly, I saw a bunch of rocks jutting out into the river from the bank: a nice easy place to get out!  I steered towards it, got up, put on my flip flops and started carrying the tube... But then I read the signs.  They told me to stay off the banks, they were trying to restabilize them!  I walked down the rocks, but there was no way up. I stood there for a few minutes, praying for Jesus... or Lydia... someone to rescue me. But it was obvious there was only one choice. So I told God I trusted Him, and launched myself back in the river.

After a while, I saw a place where tree roots formed a ladder that could be climbed up.. as I zipped past. Encouraged it could happen again, I steered in that direction.  I missed the next one by like two feet! But the third one I was able to grab and pull myself up.

I was probably a mile down from where I started!  And that bridge I'd looked for? As I walked down I saw that the bridge had been taken off to have construction work done to it! I'd zoomed past it without realizing it.  But the walk back did afford me time to gaze at some pretty things, which I later went back and took photos to share with you and remember.

We went back to camp and ate dinner, then grabbed our wet blankets and wet clothes and headed to Brevard, the nearest town, to find a laundromat.  We eventually did, but it was a quarter for five minutes in the drier! So we only dried our blankets, and only until they were mainly dry, not totally dry.

By the time we got back to the campsite, we were hungry again. Our firewood had gotten wet, so we didn't try to make a fire, but instead roasted a few hot dogs and s'mores over the flame of our propane camp stove.

We set up a second tent inside the first tent. That's right!  See, when Lydia and I got together last week to figure out what supplies we'd take on our trip I'd brought my tiny little two person tent to air out, as well as my parent's big three room tent. When we found out it was only going to be Lydia and I (there was another girl who backed out) it especially made no sense to pack two tents.  So it was by mistake that my little tent ended up coming with us... but thank you God that it did!
Because we didn't really want to be on top of one another, Lydia set up her sleeping stuff in the main tent, and I got in the tent-within-a-tent, with the plan being that if it started raining again, Lydia would come in. So when I woke up as she unzipped my little tent I sleepily asked "Is it raining?"

"No," she answered, "I'm just cold. It's damp." So I rolled over and let her in.  That was our first day. And even though it sounds kind of crazy, it was a lot of fun.
Posted by Pamela M M Berkeley at 4:03 PM