Some Waiting, Some Hey, It's Me-ness 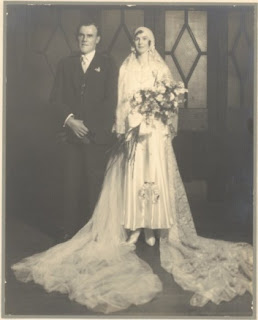 Yesterday was, as I said, emotionally draining, so blessedly today was not.

I have not, however, found out if I got the job yet.

In the morning, I hoped I'd get a call before I left the house. Due to my long unemployment, I do not have a cell phone anymore. So I thought, "What if she calls and I'm not here? What if she calls, I'm not here, and she wanted me to come in today? What if this makes her decide to call the next best candidate instead? What if..." and I decided I was freaking myself out.

My younger sister got her wedding dress today. She'd found it, if you remember, a few weeks ago, and she picked it up today. I was with her when we found it (we impulsively stopped in at a bridal boutique), but my mom was not, so she came today. Alison tried it on again, and tried on a veil, and all that fun stuff.

Before this, we'd stopped by a store where Alison had almost gotten a job offer last week.  She'd struck up a conversation with the owner, in a friendly way, and he subtly tested her knowledge of the types of products they sell. Then he told her he'd be interested in possibly offering her a job. She's tried to meet up with him since then, but today is the first she succeeded. She won't know for sure until Monday, but it does look like she's found a job.

After these two adventures, we stopped and got smoothies, which was fun, then we ended up coming home. All of this did take a long time, however, so by the time we came home it was almost 3pm and I was sure my potential boss would have called.

I told myself it was good, because I'd rather be there when she calls anyway. So I waited for two hours, jumping each time the phone rang, and letting out a disappointed sigh each time it wasn't her. She didn't call.

On Monday she told me she was interviewing two more people, later that day and on Tuesday, and she'd let me know Wednesday. Well, now Wednesday has come and gone. Still, I'm not unreasonable and I can think of several very reasonable reasons why she hasn't gotten back to me.

So then I get online to read the blogs I follow and the first two have chosen today to talk about waiting on the Lord.

I love when God does that, when He uses things around me to speak to my soul. How intricately his world and people are connected! What an amazing designer He is! So glorious!

I talked to my mother about some of the things I mentioned in yesterday's posts. Also, after I posted it, Ryan and I talked weddings. We've decided to continue forward as though we will be blessed enough to have a wedding in America... and if it doesn't happen, it doesn't happen.  I know God will give me the desires of my heart, so He'll either grant me this burning desire, or He'll change my heart. Maybe a little of both.
Ryan and I had fun talking all things wedding. I walked him through my 'dream' wedding, and he said "Wow, now I want that!" He wants to add his stamp though, of course, and that's a wonderful thing.  And we did some brainstorming and came up with some possible money saving techniques.

No guarantees, but just a little hope.

I am so sorry I have been so up and down lately. I wish I could just be steady and wise and show you how awesomely perfect I can be... haha... but that's not who I am.  And it's not what God's calling me to do.

This blog is relational. This is His blog. And it is to love you with. And part of loving you, as I best know how, is by letting you know me.  This blog isn't about me though, and I don't want it to turn into the Pam show.  But I know I best relate to those who let me in, and I know God has gifted me with a heart that was designed to be open to others, even strangers, so best to love them with.

Post Script:
Ah!! As I'm writing this, I'm talking to Ryan in another tab.  When we were talking weddings earlier, I said at least we knew what wedding rings we were getting. We'd picked some out on etsy like four months ago, and I have it saved in my favorites. He didn't remember that at all. So I just sent him a link... and now he doesn't like them anymore, even though we both were very happy with them before. And the reason he doesn't like them is the very reason I do like them.  We'd looked together for two days before we found rings we both liked last time, because I do NOT like his taste (and apparently he doesn't like mine.) He likes sleek, modern, masculine.  I like vintage, ornate, feminine. And he insists that our wedding bands have to match. (Plus, we'd found ones we both liked where we could get BOTH for under $100. Except he has to change his mind. Sheesh.)