Last week I joined this Yarn Along, where people share what they're reading and crocheting or knitting. 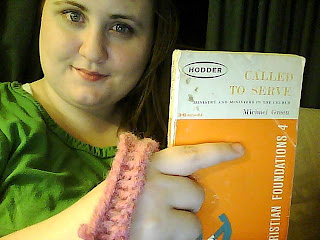 I had been gifted with some nice pink yarn from my friend Tabitha, and I shared a photo of some yarn that was just that. I hadn't done anything to it.

Well I still haven't done much... though I did more than the photo shows... I just did it wrong and had to rip it out. :) It'll be a nice, simple scarf in afghan stitch. I somehow had picked up some extra stitches along the away. I had started out with fifteen and suddenly I realized I had twenty one.... oops! This is my first crochet project in a while.

I finished The Calvary Road by Roy Hession that I was reading last week... it was awesome. This is a classic Christian book from 1950 and you should totally check it out. It really spoke to me and has given me tools and encouragement for a deeper walk with Christ, a walk of brokenness and servanthood.

Then I read Ascent from Darkness by Michael Leehan, my booksneeze book of the week, which I already reviewed here. It's the true testimony of a satanist who was pursued and won by Christ. It was excellent.

I also read 199 Treasures of Wisdom on Talking to God by Andrew Murray. That was like a twenty minute or less read, but it was sweet and good. Each of the 199 "Treasures of Wisdom" is a one to three sentence thought taken from Andrew Murray's other works... however, they are strung together in such a way they are a seamless stream. It's exceedingly well edited, and many of the treasures are thought provoking.

I also read Is it You, God? by Priscilla Shirer, which is apparently excerpts from a larger work of hers on discerning God's voice. I'd picked that up a long time ago, and I think I may have read it then, but I couldn't remember if I read it in it's entirety. Since I've determined to read all the Christian books in my collection, I couldn't let that go.  It is good advice to determine whether you're hearing God or yourself. It paired very well with Murray's Treasures, and I read them in the same afternoon.

I started, and am still reading Called to Serve by Michael Green, which is why it's in the picture. It's part of a series of "Christian Foundations" which were published in the sixties by The Evangelical Fellowship in the Anglican Communion. I've got a few of these, but I've never read them in their entirety... because they're kind of dry. Nothing bad, just not an easy read. I'm part of the Anglican communion though, so I admit it makes me feel like happy and connected to have them. Maybe I'm silly.

I also told myself I'd start going through the first of the three The Holy Word for Morning Revival books I have, which are basically very meaty Bible Study daily devotionals. They are from the Recovery movement I fellowship with, and they publish tons of them. I just happen to only own three. This one is titled Crystallization-Study of the Gospel of God Volume Two.  I don't actually have Volume One, so I'm starting in week seven. I did day one... two days ago.