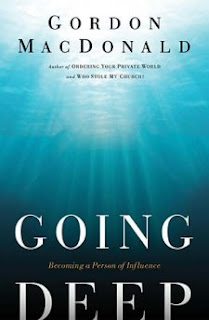 In Gordon MacDonald's Going Deep, we enter a fairly large New England Church and follow their journey to start and implement a new discipleship program.  The book is written in an interesting format. It's almost a fictional book, but MacDonald's really written a non-fiction book using a narrative style to introduce the concepts he wants to address. This allows the reader to translate the methods and reasoning to their own situation.

Several times during the book I would furrow my brow and be uncertain as to whether or not I liked where MacDonald was taking this... but every time, he did redeem himself.

First and foremost, MacDonald wants us to recognize the need for churches to have intense discipleship programs. I think that the need for discipleship should be evident, but that in many cases in my Christian experience churches have not been the ones to implement discipleship, but instead it's happened time and again in deep personal relationships, small groups, Bible studies, prayer meetings, and also just between Jesus and individuals or couples in the time they spend with him.

I was intrigued several times by MacDonald's approach to things. For example, he saw Barnabas as an obvious 'deep person' but had trouble seeing Mary of Bethany as one until it was explained to him (I think she's the primary example in the New Testament).  I was also surprised he'd never previously appreciated Jesus as a rabbi. While I didn't know everything about a rabbinical contract, I think every believer needs to come to Jesus to 'learn at his feet'.

Also, MacDonald kept turning to businesses leadership and training programs for inspiration. For a while I was afraid he'd embrace their methodologies, which usually have to do with 'bottom lines' and obvious production, and are rarely in line with the description of Jesus' ministry. However, MacDonald showed wisdom in gleaning the good and not incorportating the bad. The discipleship process he detailed would be beneficial to many churches, and I wouldn't be disappointed if it was widely adopted. I just hope, however, that those who take such a project on do so humbly and with the understanding that Jesus, not they, is the main Teacher.

MacDonald would switch writing styles often, which didn't confuse me, but did sometimes disrupt the rhythm of the text. I also was sad MacDonald didn't tell how the fourth part of his discipleship program was implemented "Pointing [disciples] toward leadership opportunities in the church or in the larger world" (p. 162), something which I thought exciting when towards the beginning of the book was mentioned. That is something very few leadership/discipleship programs make a priority and I was looking forward to that section in the narrative.

All in all though, I thought this was a fascinating read.

I received this book from the publishers in exchange for my unbiased review.
Posted by Pamela M M Berkeley at 9:04 AM