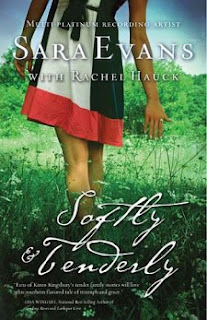 Jade is settling into a happy marriage. Though struggling with infertility and her mother's leukemia, she's a successful boutique owner, has left her uncertain child-of-a-hippie childhood to be embraced into an established, southern family, and has her loving husband...

Then everything begins to fall apart. The next thing she knows she's jumping in a pink Cadillac with her mother and mother-in-law and heading across the country to face family, life, and death.

This was an unusual fiction book.  Apparently, it is the second in a series. I didn't realize this when I began reading this, and felt I was missing something and checked it out. I was still able to get into the plot, but I did feel I was lacking vital backstory.

I would assert this book is not just the story of Jade, but also the story of Beryl, her mother, and June, her mother-in-law.  Both of them are also facing very difficult things and struggling to make it right.  While having slight Christian tones, it is mainly focused on the lives of these women, not on Christ in their lives.

I did enjoy this story, but it wasn't what I thought it was from the description. Because it is one in a series, I also didn't feel like it was finished when it was over.  I felt somewhat satisfied with Jade's part, and definitely satisfied with Beryl's part, but what about June? I felt like her future was a question mark.

I also admit the affluence of June's family turned me off a little. I came to relate to her, but the book started off with her complaining about her daughter-in-law's choice of trucks because "You're a Benson now... surely you can afford a better vehicle than this" while clinging to a Gucci bag and wearing haute couture clothing (p. 2). I know it's my own bias, but I have trouble with relating to a person who is supposed to be a Christian pillar in her family, but insists on expensive luxury in own home.  I was also afraid the book would be a soap opera of the rich and regionally famous. While there was definitely some soap opera-like twists, I felt like the authors delved into the real heart and flaws of the character of June, despite not resolving her story to my satisfaction.

While I don't have a feeling of "This was excellent" when I finished, I also think I'd be interested in reading the next book in the series, coming out in January, to see what happens next.

I recieved this book for free in exchange for my unbiased review.
Posted by Pamela M M Berkeley at 11:44 AM