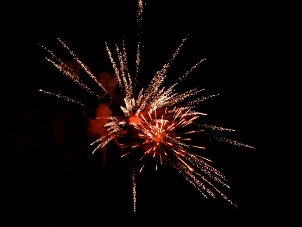 The first part of the dream had some elements that I don't feel comfortable sharing, as they contain references to personal things.  But then I was at home, getting ready for school (even though I was the same age I was now, for some reason everyone was insisting I go to high school for the day, and we were waiting for the bus) and my mom came to grab me and get me to join the parade. A patriotic parade was going by, after the limousine motorcade, and she wanted me to drop everything and join. For some reason, I didn't trust what was going on, so I put down my artwork and my backpack, but refused to relinquish my purse, which had valuables in it.

As I was thrust into this patriotic parade, I went a few steps with them, but everything about it seemed wrong, wrong, wrong.

So I turned around suddenly and cast a demon out of my mother.  She collapsed to the ground. Don't get me wrong, I'm not saying my mother was evil, but that she was being controlled by evil in the dream when she put me in this parade. Some people appeared behind me with my mother (I think they were my family?) and aided her (she was okay, and in fact freed from evil). I didn't really see them well, because when I did that, the people marching and singing in the parade had turned around with malicious expressions on their faces.  I stood my ground and told them, in the name of Jesus Christ, to leave. They all fell back some, and most of them left snarling to each other, "We'll come back in a year, when we're sure to win." I thought Why do they think they'd win in a year?

A few stayed, then just one. He rose up in the air and was riding a flying horse/helicopter like thing (it was a dream).  He was screaming at me and I was proclaiming back at him how he wouldn't win. He threw a weapon at me, a hammer. It missed me by inches on the right, but it missed me. I taunted him again. He came lower and threw a sword. It also missed me by inches on my left. For some reason, I couldn't really move away from these as they came towards me except marginally, but it was fine.

He came down to the ground. I tried to grab the hammer to swing at him, but my angle was bad and it was heavier than I anticipated. He reached past me and grabbed the sword just as I thought Oh no, I should have grabbed the sword, he's going to take it and attack me!

But even though I thought this in my head, I taunted him confidently anyway, saying he couldn't really get me. And as his sword came down to slice my neck, it slid within a tenth of an inch from the skin of my neck and slid in the ground (I was lying on my back for whatever reason. I never fell down in my dream, I think this was because I was starting to wake up and becoming aware of my real body's position).  As it slid past my neck without harming me even though he was within a foot of me and should have made it, I proclaimed the truth, "You can't hurt me! You keep aiming at me and try to hurt me, but it always misses because you can't hurt me!"

At this truth, the attackers eyes grew large and the sword glowed. It did an excaliber type thing where as hard as he pulled he couldn't pull it out of the ground even an inch, despite the fact it was his own strength that drove it in.  He turned and ran. I pulled the sword out easily and severed him in half by swinging the blade in front of him so the force of his own running split him in two.

Then I broke out in a celebratory rendition of Katie Perry's "Firework" because, you know, it was a dream.  The people who were behind me when I faced the paraders turned enemy army turned into my back up chorus and a few fireworks exploded above our heads over the woods (this all took place in my front yard).

My rendition was in a lower key though, so I didn't get to enjoy any of the fun high notes and when I tried to start over my back-up chorus shook their heads and walked away. So I had to stop.

That was the end of my dream. What do you think?
Posted by Pamela M M Berkeley at 4:41 PM