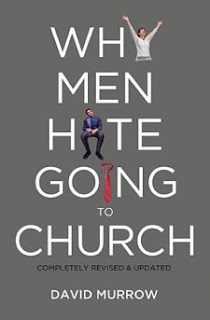 In most churches, not just nationwide but worldwide, there is a gender gap: more females than males attend. This is especially critical to churches when you realize that churches that have a large gender gap usually plateau and die, and many believe no gender gap is an indication of a churches spiritual health. David Murrow focuses on this issue, the possible reasons for the problem, and more importantly, practical steps churches can take to help fix it, often without majorly alternating the important things. (If you've read this book before, this is a new revised edition.)

I found the book interesting, and I'm already thinking about who I'm going to lend it to, but I admit I can't rave about the book yet. For one, I was irritated by his criticism of men who do go to and like church, accusing them of being feminine or even effeminate, especially if they are verbal, academic, or artistic. I don't really think masculinity depreciates because you did well in school or are a musician. However, since the author attends church and writes, he was sort of self deprecating with these remarks, so I don't think he meant them too harshly. I also disliked his classification of several things as feminine or masculine. He based it on surveys, but that seemed like a chicken-and-the-egg scenerio to me: were these things gender specific, and drove men from church to avoid being feminine or did men perceive church as feminine and some things became feminine by association?  It's an important distinction because in the latter category Murrow might be recommending we downplay or disregard things that are essentially just Christian but have been poisoned by a skewed cultural worldview. For example, he criticized talking about Christ as our bridegroom as making some men feel gay, but this is a Biblical metaphor expounded upon by Paul.

While I think that this a cool book and it made me want to help reach men and boys, I think that every Christian should be cautioned to pray before implementing a single idea from it because anything not founded in the Lord will be futile anyway!

I received this book free from the publishers in exchange for my unbiased review.