I'm starting a new thing on my blog! 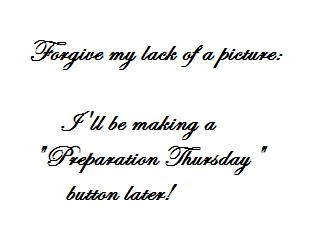 For me, Preparation Thursdays will be about me preparing for India. This includes, but is not limited to, preparing for the move, the culture, and marriage. I would love to have this not just be about me, though. I doubt any of you are preparing for India, but many of us are probably in preparation for something. Perhaps you're preparing for a new child, a career change, a move, or something smaller.  I don't know if this should be a link-up simply because I don't know if there would be any interest. So if you're interested, comment below and if anyone is, next week I'll include a link-up. If not, then it'll just be me and I won't get all sad because I come on and no one joined the fun.

Often during the week I want to blog about what I'm doing to prepare for India. But on any given day, what happens may not be more than a sentence in another post.  However, I've decided that if I collect all that preparation for once a week, I should have something worthy of a post... and this also serves the purpose of making sure I have actually done something to prepare each week. After all, it will make the whole transition easier if I've done it a little here and a little there instead of scrambling at the last minute.  Additionally, having a series of these recording my efforts up until the move will help me remember and learn from the process in the future.

So this week... I sent off for my passport! That's a big step for me. I've been wanting to for so many months. First I had to get a new copy of my birth certificate (you need a 'long form' version now. I apparently had a short form one) and then I didn't have the money. I got the money about a month ago, but I needed to get my pictures made. With me, transportation is always an issue. So anyway, this Tuesday I finally got it done and it's sent off. The guy at the post office said I should have my passport in 4-6 weeks!

Also this week I got rid of my yarn.  I'm a crocheter and (somewhat) knitter, and I love crafting. But I've been praying to God to find people who need my belongings, since I figure I'll need to get rid of say, 90% or so?  So when there was a call at church for yarn because someone makes hats and scarves for the needy, I was like, "Thank you, God!"  I kept the yarn I got for Christmas from my future brother-in-law (just two small red roses) and what is suitable for baby blankets, because I have two to make for Tabitha! Everything else had to go... (and what I kept I'll use up before I move.)

Admittedly, since I got rid of it, I've found some more. So I'll probably give more away. But it's something. The paring down of my possessions is going to be a long process.
Posted by Pamela M M Berkeley at 11:28 PM