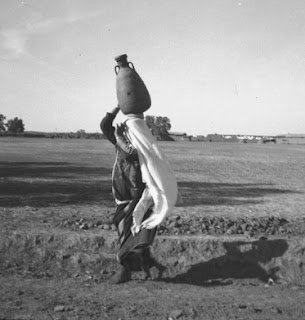 When I was just reading in Jesus the Evangelist, the author was calling us to consider what "water jars" we've left for Jesus. He referring to the story of the Samaritan woman by the well. When she realizes that Jesus is the Messiah, she abandons her water jar and runs into town telling others to "Come!"  When she left for the well that day the whole purpose of even going was to fill up her jar and get water for herself and her household. But in the light of encountering Christ, that ceased to be of the utmost importance.

So I sat here and I thought, "What water jars have I left behind?"  I can think of a few.  For instance, when I was in middle school I was dead serious about becoming a professional singer. I tried to be "on" everytime I sang along with the radio. I would practice enunciation on the school bus home. I wrote songs constantly.

But in the eighth grade I had an encounter with God. Among other things, He told me not to make many plans, because He had plans for me. And afterwards, as I puzzled over what that could possibly mean, not much seemed clear about it... but one thing did. My plan had been to be a professional singer.  So I let that go, and left my future wide open for God to plan. I have never regretted it, despite the flack I've gotten for not having a "direction".

Now I'll be honest. While I don't have a bad voice, I probably wouldn't have made it as a professional singer. I realize that. And while I had zeroed in on singing for a few years, it hadn't been what I was striving towards since infancy, so it's possible even without divine intervention I would have changed my focus.  I'm not saying I gave up much for Him with that choice. I'm not asking you to see me as great or even sort of good.

What I am trying to show you is God is worth giving up it all.

My junior year of college, I had grown in the Lord and my current boyfriend and actually fiance, Eric, wasn't that comfortable with that. Despite a verbal confession of faith, Eric was getting annoyed by my new sense of devotion.  I think you could adequately say he was jealous of God.  Before, I'd probably idolized Eric, but God was making me fall deeper and deeper in love with Himself.  I wasn't worried about Eric, because I'd not been that deep in my faith and Eric did say he was a Christian. So I figured the more I shone out Christ's love from spending time with Him, the more Eric would respond by drawing closer to God himself. After all, that had been my own response to seeing that light shining out from my friend's lives.

Instead, Eric seemed to get irritated or even angry by my transformation that was ever taking place. It culminated one night in a fight.  Eric kept saying he "couldn't compete with God" and I felt myself brace for him to ask me to choose between him and God.  Now I loved Eric. I loved him deeply. As I said, I think I may have set him up as an idol and my love for him had not decreased, but instead my love for God just transcended that.  I loved Eric unconditionally and fiercely. But as I braced for the choice, and I whispered to my soul, "What if he asks me to choose?" the answer was clear.  God. This time. Anytime. Always. Always.

And while part of me in keen pain at the very thought of losing Eric, peace descended me and I got that feeling of the divine "yes." That's the best way I can describe it.  I felt wrapped up in God as I knew, without a doubt, I'd never choose Eric or any other man over my God.

But Eric didn't make me choose. At the time, I took that to mean he wasn't fighting God as much as he seemed to be and a sign that in time he'd grow spiritually. Well, I hope that is true. For those of you who know the rest of the story, it turned out our entire relationship had been built on lies and he betrayed me in some of the worst ways (yes, plural) a person can be betrayed.  But the truth is, from that time on, I had prayed if I should be in the relationship with Eric. And I had always gotten the yes.  So when it ended and I felt like I'd been cleaved in two, I also felt I was at peace and whole.

In that situation, God didn't make me put the water jar down then. But He did put me in a situation where the question came, "Would you put down this water jar for God?" And at my yes, He said, "You don't have to..." And then later, the time came naturally when the jar was taken from my arms and I do see purpose in both the letting go and the continued carrying.

It's amazing how you can feel such things in Christ.  There's the true you, who is unshaken and at peace in God, and then this earthly expression of you, which gets sandblasted and walks on sinking sand. But the truth is, I knew I'd been persistently prayerful in my relationship, and that all the betrayal and pain I was walking through, well God knew it was coming. And if He had told me to walk this path even though He knew this was awaiting me, then He must have intended this for my good. And I hung onto it. I also found myself rejoicing because even though Eric had lied in so many ways, and cheated on me, and all that, I could pray for him. And there was such freedom and hope in that. So whenever Eric comes to my mind, I pray for him, full of holy love for him.  There's no chance of anything romantic happening there again, ever, don't get me wrong. But I still love Eric fiercely and unconditionally. I just no longer love him with the love of a lovesick young woman, but with the holy and unending love of the Savior of the world who lives in me.

These aren't my only water jars, and there may be better examples that fit in the pattern. But as I read that and reflected, I thought, "Have I ever opened up to my blog about these things? Have I ever really shared?" Honestly, I'm not sure.

There are water jars God is having me put down daily. Especially in regards to India. But you see, I am ready to give him anything. My future, my spouse, my family, yes, even my own life. Some moments I am more a scaredy-cat than others, some moments I still cling to things that really aren't important anymore. But overall, I am ready to lay anything down for Jesus.

Because He is worth it.  So very worth it.

Linking up to Brag on God Friday.
Posted by Pamela M M Berkeley at 11:06 PM