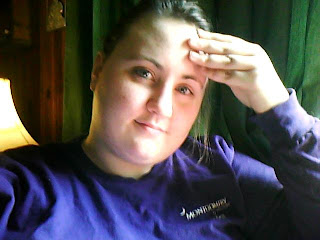 I'm about to really make my blog go crazy. So if you've come here and it really looks bizarre.... forgive me. I'm messing with it. I'm giving it a makeover.. except I have no idea exactly how I want to make it over. So I'll be experimenting. I doubt I'll settle on a final product until April though, so don't get too excited or scared by anything you see here.

I do have in my head an idea for how I want it to look when I move to India... but that's still a ways away. Aaand of course that's what I'm supposed to be writing about here! It's Preparation Thursday!

So what have I done to prepare to move to India this week?

Well, I was hoping to title this post "gainfully employed" because today Ryan had a job interview we really thought he'd get...

But the person who was going to interview him never showed up! He waited for three hours before he left.

The unfortunate truth is that our future is really on hold until he can get a job. I mean, it's not that much on hold, but everyday he's unemployed pushes the ultimate day we get to be together farther away. But we trust in God's provision and timing, as well as His guidance. And He's let us know we're marrying sooner rather than later. So we're having faith.

In other news I did start working out again regularly. Ryan and I had a nice discussion about that. He lives in a city of two million and well, it's polluted. I live a rural area and the air is nice and clean. So I wonder about if I'll be able to really work out in the outdoors when I go to India. When my friend Lydia moved to a smoggy area (Anaheim) from here she got bronchitis. Twice. It ultimately cascaded into having her come home earlier than she thought she would. So I'm wary of air pollution. I'm not sure my lungs won't freak out...

But who knows? Still, I'm thinking we should probably get an air purifier and I can do my real exercising indoors.

Ryan and I also have been talking wedding. I'm pretty sure it's 100% certain we've picked out the wedding rings! It will be a little while before we can actually buy them though. We found them on etsy. I love etsy!

Preparing for India is mainly about preparing my heart, and that's God work. I've spent time with Him this week... but not as much as I should. Still, I have faith in the transforming power of fellowship with Him, and I can feel Him preparing me.
Posted by Pamela M M Berkeley at 9:44 PM