Book Review: In Too Deep by Connealy 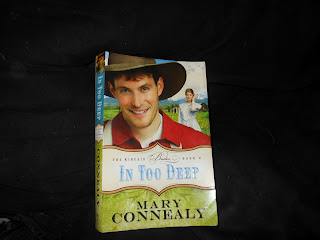 In Too Deep by Mary Connealy is a Western set primarily in the Colorado territory in the days of cowboys. For the safety of her children, Audra has just agreed to marry Ethan Kincaid. This book is a marriage-of-convenience-turns-into-love story set against the dangers of hired guns and a mysterious and creepy cavern.

I think it may have been partially a case of being book two in a series when I hadn't read the first one, but character development was weak. For example, for the first five or six chapters I thought the brother, Seth, had either mental retardation, Down's Syndrome, or perhaps severe brain damage (and this being the 1800s they hadn't specified which). It wasn't until later you find out that he's suffering from PSTD and amnesia from childhood trauma and the Civil War and is totally normal and lucid sometimes. That threw me for a loop.

I wish it was only character development, but it wasn't. For example:
"Seth shrugged. 'I doubt they can get any worse.'
Ethan had to give him that.
Rafe shoved his chair back and said, 'It's settled then.'
Ethan had kinda stopped listening, so he wasn't sure just what was settled." p. 125

That makes no sense! How can Ethan be agreeing with one thing mentally, and then have stopped listening by the next sentence with nothing having had happened in between? There were many of these flaws in written logic, and it reminded me of a first draft that no one went back to read for consistency or coherency.

Despite its flaws, I actually found myself getting into the adventure by the end, and I want to know what happens next in the series. Upon reflection I realized this was a good story, it just wasn't written well. I wouldn't say you shouldn't read this book, but just realize you're not going to set this down and think, "That was the best book ever!" However, if you're looking for a fun book to read at the beach or something this would probably fit the bill.

I received this book for free from Bethany House Publishers in exchange for my unbiased review.
Posted by Pamela M M Berkeley at 7:00 AM