It was my privilege yesterday to attend a wedding! My sister's fiance's sister, Heather, got married in Asheville. As my sister has been dating her brother for six years and I also attend church with her parents, I have known her for years, in a sort of friend of the family capacity. 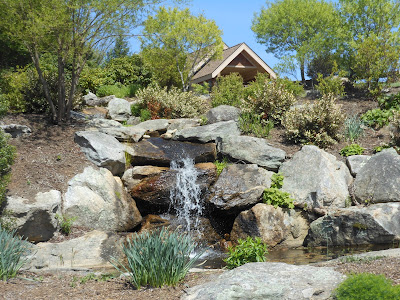 It was a beautiful setting. Heather is an artist, and actually was an art major at my alma mater, a significance that will come into play later in the story... 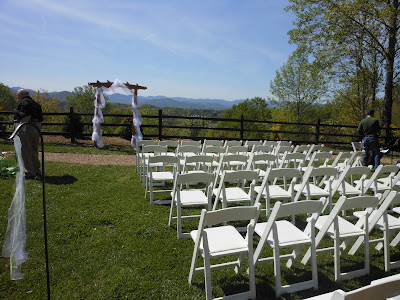 I attended with my parents and my sister. We weren't too sure of the location so we'd left with plenty of time to get there and arrived early. I got to see the bride and her bridesmaids going off for photographs prior to the ceremony. We greeted her mother, my sister's future mother-in-law, and after a little while made our way to the ceremony space. The best man served as an usher and took my arm and led me to my seat. Brad, my future brother-in-law was a groomsmen and he'd chirped when he saw us approaching, "I have the one in the middle!" That is, he'd guide my sister to her seat. She was seated in the reserved seats up front for family.

I sat on the aisle, which afforded itself for good photographs. I found last year I feel naked at a wedding without a camera! So there are plenty more images where these came from, and I have uploaded more than twenty for your visual enjoyment.

There was a trellis for the couple to be married under, and the backdrop was a lovely vista of mountains and natural splendor. The weather was great, sunny and neither too hot nor too cold.

The ceremony itself was very sweet. One adorable part of the procession was when the flower girl covered her face! The minister gave a brief synopsis on the import of the event and the Christian viewpoint of marriage. Music was provided by students of the father of the bride, who is a high school music teacher. I learned later they were on a "field trip" since it was Friday, and the lucky ducks were getting to miss school for this!

After the happy couple was wed, we were dismissed for the cocktail hour on a terrace. They had scrumptious sangrias: red, white, and virgin. I had one of the first and two of the latter as I am not a big drinker. But sooo good. They also had appetizers circling on trays carried by waiters. I had fried risotto balls, sausage stuffed potato, and some fancy word for small pieces of toast with black bean spread with onion. There were a few I didn't try as well, such as something with sundried tomato and something else...

This was all going on while the bridal party took photographs. One fun thing I noticed was we'd attracted an audience! There was another building above us on the mountain with a good view of the ceremony and cocktail space. During the ceremony I'd noticed two girls (teenagers I think) watching from up there... during the cocktail hour the crowd has swelled to over a dozen, mainly people in dress clothes (I saw a bunch of men in blue dress shirts) all just watching the proceedings! It was funny. 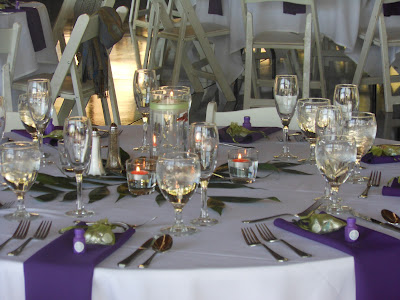 After some mingling with the other guests (all of which were very nice) the DJ was making noise for us to go into the reception. They'd provided a game as an icebreaker. They'd put pennies at each seat and you were supposed to talk about what you were doing the year of the penny. Mine was 1991, so I said I was in kindergarten.  My younger sister got 1985, when she wasn't born, but the DJ said add ten years if you weren't born yet, so she did 1995.

In this was we began talking to the other people at our table (before Alison, my sister, was swept away by her fiance when he returned from photo taking, to again be seated with the family).  I found out I was sitting with more alumna of Converse (well one was a current student) who had gone there with the bride. (Converse is my alma mater and unrelated to the shoes.) I had forgotten about Heather having gone to Converse, since she had transferred in after I graduated. I asked if they were going to do the traditional thing you do at a Converse bride's wedding... and they had no idea what I was talking about!

So I clued them in and they got one of the bridesmaids, another Converse woman, in on it. I told her that she had the most clout amongst us, as a bridesmaid, so she'd have to arrange it. I didn't feel I had the authority to arrange it.  When we did this at the last wedding I'd been to we'd told the DJ what was going on so he paused everything, but I'd been a bridesmaid there and I felt shy to do this here. I'll clue you in soon, if you don't already know.

Meanwhile, we ate. I loved the roasted chicken, rosemary potatoes, and green beans I had. They also had a carving station with roast beef and salad. It was all quite good.
\
Then the best man and maid of honor toasted the happy couple. Following that, they did the "cutting of the cake"... which didn't really happen because it was cupcakes!

The bride stopped by our table to inform us the cupcakes with Clemson paws on them (the groom graduated Clemson University) were lemon with pudding, the ones with the chocolate pettifores on them were Boston Cream, and the ones with the orange calla lilies were orange creamsicle flavored. Yum. I had a Bostom Cream and Orange Creamsicle. I would have tried a lemon one, but I was full!

Then the dance floor opened with the daddy daughter dance. 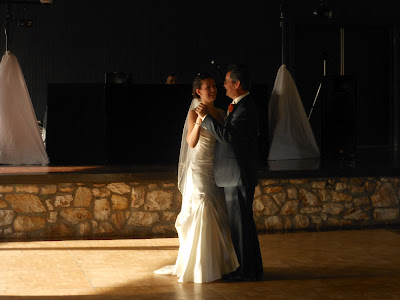 I'm a typical bawler at weddings. I always cry. But I was impressed with myself that I didn't get teary at all during the ceremony. When I had seen the unabashed joy and love on the couple's face when they were announced into the reception, I'd felt a bit choked up, but held it together. But I'm a huge sucker for Daddy-daughter dances. I was tearing up here and there but was mainly okay, averting my eyes and trying not to listen to the lyrics of "Butterfly Kisses"... until I saw the mother of the bride just loosing it. She was sobbing. Then I couldn't hold back a tear or two as I retreated to the otherside of the reception hall. 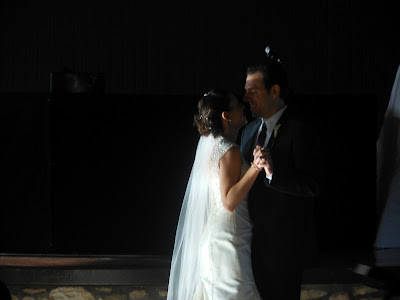 The first dance then took place. I really enjoy this photo I took of it.  About two thirds through the song (which I'd never heard before) they opened it up for others to join them. The DJ was asking everyone to join them, but I cleverly busied myself with photo taking, since it was a slow dance and I had no one to dance with... It was bittersweet to be at this wedding with Ryan. Not that this is the first wedding I've been to without him, but it's the first since I've applied myself to wedding planning and the first without a close, single girl friend to party with.


That didn't keep me from partying though! I really enjoy dancing and I liked at least two thirds of the songs that were played, so I was joining in the fun. Man, the best man could DANCE! After a few songs we cleared the floor because he and the bride's youngest brother could give the gift of dancing Thriller to the bride.  I was right behind her, and she was laughing and clapping: that's her hand in the photo.

I participated in the bouquet toss so I don't have any photos. The youngest bridesmaid got it. I think she was 12. It was pretty funny.  Then the garter toss? Hilarious!

As I said before, the groom is a Clemson graduate. Apparently he brought a Clemson game ball. He put the garter around this football and went on the opposite side of the reception hall and threw the ball! The one who got it was definitely the one who wanted it. He was ten. It was very funny.

Soon after the bridesmaid earlier appointed decided it was time. We were going to ambush the bride and pull her off onto the terrace where we'd had the cocktail hour and do it....

It's a Converse tradition for any Converse girls in attendance to circle the Bride and serenade her with the alma mater.  I'm not sure if it was from shyness or if they just didn't think to cut off the DJ, but we sang to her while another song was blaring on the dance floor, which made it all the funnier. I'd thought to tip off the photographer before we did it, which made her eyes light up. Of the four of us there, the one of us who didn't remember ANY of the alma mater was the one who was standing directly in front of the bride, just humming.  That made Heather laugh a lot.

This was my third Converse wedding, my third time doing this, and I hope to do it at many more in the future. It's great fun. And I feel good that the other Converse girls were saying they were glad I told them, so they could "spread the word" because somehow they'd missed hearing about this tradition. So I helped it live on!

What remained was the serious matter of attending the dance floor. There were many group dances (like line dances) that brought a lot of people out. My mom wanted to go dance when Shake Me All Night Long (is that the title of it?) came on.  Alison is always game for the cha cha slide. Many of the group dances I'd never heard or seen before, but I watched the best man and stumbled along. I do love to dance, but I readily admit I am not very fast at learning steps. Luckily, I don't (much) mind looking foolish, though I prefer not to be a spectacle if I can help it.

There was a funny moment when the getaway car was pulled up and we thought it was over... but the bride came out and chided us there was at least half an hour or forty-five minutes left and to get back inside! That was fine, we weren't trying to hurry the reception so much as we thought it was a signal. 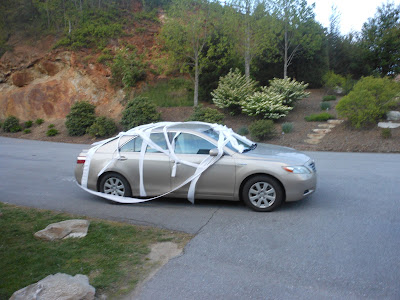 The sun set and many people went out on the terrace to watch it. I went out and snapped a photo. The party continued after dark, but at this point I'd pretty much taken all the photos I was going to... so this point in the story seems to be as good a point as any to share this awesome one of Alison.

We saw the couple off by blowing bubbles. We all laughed uproariously when the groom tried to clear the toilet paper by using the windshield wiper and only proceeded to get some stuck under the wiper! The bride admonished all of us that we'd best grab any toilet paper we saw on the side of the road on our way out, and they were off. 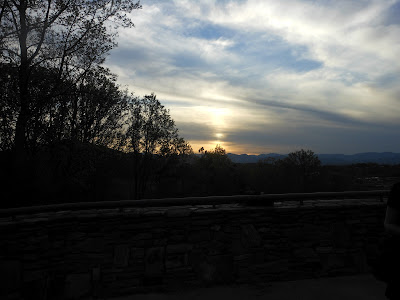 It was wonderful fun! One funny thing was that I'd not noticed it was a Friday the 13th wedding until the DJ pointed it out. I don't think the day will bring any bad luck on the couple, and indeed I hope they have many blessed years ahead!
Posted by Pamela M M Berkeley at 4:45 AM