Book Review: All Things Are Ready by Amy Hayes 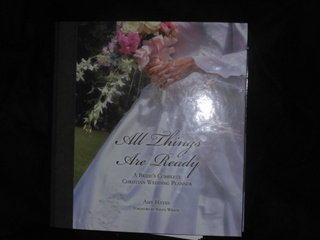 I had a divine appointment with this book.

I had been soo excited when I heard about it! When I read it was a Christian wedding planner I thought it probably had a pocket in the front, maybe pages you could write in... I didn't realize it was a binder! So cool!

The day it arrived, I was delighted... and then praising God when a few hours later it was determined I was going wedding dress shopping that day! I hadn't known in advance it would work out to be that day, but God did and I felt He sent the book right then as a way for Him to say "I love you" and all would be well.

I loved Hayes sensibleness in pointing out that brides can plan a perfectly nice wedding in just twelve weeks, and that often the Wedding Industrial Complex pushes brides towards longer engagements because the longer the engagement, the more money a bride is likely to spend. Consequently Hayes has tried to organize her planner so that someone with a shorter engagement.

All Things Are Ready is really aimed for young, first time brides, especially those who are close with their mothers. That fits me, so that wasn't a big deal, but for many women they'll need to keep this in mind and adjust it to their own person situation as they read it. Hayes explains she wrote this for her daughter, so the slant makes sense.

I enjoyed how Hayes pointed out that when the Bible mentions a bride it discusses how she prepares herself through beauty and adornment. She also talks about how we'll be trading 'bride' for 'wife' and how we should use this time not just to plan a wedding but prepare for a marriage.

There were a few times that I thought she was a little heavy handed with opinions as though they were fact. For example when discussing what day to have the wedding, she summarily ruled out Sundays with the pronouncement that since it's the Lord's Day a Christian bride shouldn't make it her day. However, I've been to Christian weddings on Sunday afternoons before, timed so that church can be attended, and have found nothing wrong it. I can't help but think of these Christian friends who got married on Sundays and wondering if they'd read this as brides would they have been hurt? The Bible itself uses the debate on how and when to celebrate the Sabbath as an example of subjects on which Christian should peacefully come to their own conclusion. (Romans 14:5)

Overall, I definitely recommend this resource! I'm very excited it exists and feel blessed to own it!

I received this book for free from the BookCrash program for my unbiased review.
Posted by Pamela M M Berkeley at 3:39 AM