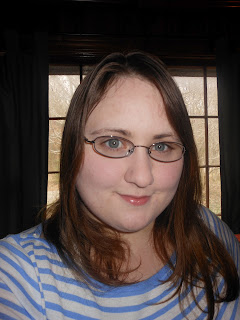 So I went over to the Monday Meet-Up linky party at Covered in Grace and thought I'd link up to one of my posts. You're just supposed to pick your favorite from the last week. Easy, right? Except when I looked I realized it's been a down week when it comes to posts and none of them were stand out good enough.

I figured the best way was to do a sort of intro post.  I promise to bring up things you regular readers probably don't know about me to make it more interesting.

Hi! I'm Pamela. I'm twenty-six and engaged to be married. In the fall I'll be moving to India (where my fiance, Ryan, is; he's Indian) and we'll get married. In the meantime I'm living in South Carolina with my parents, my younger sister who last week graduated from college, five cats, and two dogs. One of those dogs, Sophie, is coming to India with me!

I'm currently unemployed. It had been my hope to go for a residential summer job (like a camp job) but I haven't found anything and I think we're probably in the 'too late' category. But that's okay, it's got to mean God has a plan to keep me here. Maybe I'll find a job locally.

One thing that could be a reason I'm staying here is to be here for Tabitha, one of my best friends. She's currently 25 weeks pregnant with twin girls. She's also got a 13 month old, Jordan. Last week she went into labor. They were able to get it under control, but she's on bed rest. So right now, I'm actually at her house keeping her company.

Also, it's good to spend some time with my family and friends before making the 8,000 mile move.

On my blog I regularly do book reviews of Christian books (with an a occasional giveaway), tell you about my adventures, muse on God, and do random things like recipes.

Okay, now for something my regular readers don't know about me... hmm. Well some will, but this month marks four years since I graduated from college and eight since I graduated high school... and that's just plain crazy. I can't believe I've been out of college as long as I was in it! In case you were curious, I was a theatre major with a minor in religion.

Oh! I know something random. In college I was on the fencing club. I love fencing and wish I still could do it (I can't afford it right now). Hopefully I'll be able to take it back up in the future.

Of course, the focus of my blog (I hope this is an 'of course' to you!) is God and following Him and pursuing Him. I love Him so!  :)

For fun, I'm going to ask anyone who wants to for an introduction in the comments.... and you can also ask me any questions. I'm blanking on what you might find interesting in an introduction!

Linking up to Covered in Grace.
Posted by Pamela M M Berkeley at 11:36 PM