I know so many people graduating this spring! So first, I want to offer congratulations:

to the teenager of the family who gives me a ride to church, who is graduating high school

to my sister Alison who got her BS 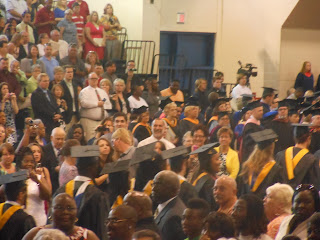 to my Ryan who got his BA

to Alison's fiance's brother got his BA.

to Alison's fiance, my future brother-in-law, Brad, who got his Master's,

and to my friend Kate is getting her Master's this weekend.

Congratulations to all the graduates! If I forgot someone, I'm sorry! Congrats to you too!

[Edit: I decided to come back and add others as I find out they graduate. So congratulations Clare, my former roommate, who graduated with her AA!]

Of all these graduations, I only attended my sister's, which was this past Saturday.  She got her BS in Computational Physics.

It was 10 in morning, but we had to be there by 9:30am. We live around 3 hours away, and we wanted to stop for breakfast. We left at 6:18am. We'd hoped to leave at 6, but it would be okay. We were a little concerned, because you never know about traffic and Alison had told us that if got there after 9:45, we'd have to watch the graduation from a room with a close circuit television, they didnt' let people into the actual graduation area after that.

About five miles down the road, our check engine light came on. We pulled over, but no reason was apparent. So we were just praying and started back down the road.

But we also knew that Brad, Ali's fiance, was coming from his parent's place, which was about a half hour farther away than we were so he was probably behind us. So we thought, "Well if we break down, he may be able to pick us up."

Alison called my mom then. Mom was about to tell her about the check engine light when she starts exclaiming "Oh no! Oh no! Oh no!" until my dad told her to stop saying that! It turns out that Brad, who was supposed to be coming down with a mutual friend of theirs, was still waiting at his house for his ride to show up. So we kept our mouth shut about the check engine light, hoping at least some of us would be able to be at the ceremony. 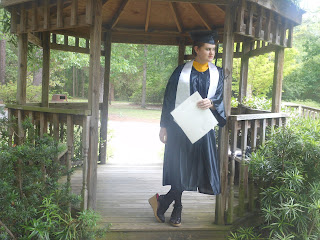 Brad and his friend left his house at 7am, so it seemed there was pretty much no way they'd get there in time.

We got fast food breakfast and had a rest room break, and arrived by 9:45, where we met up with another friend of Alison's who was waiting with our tickets. And Brad and his friend's tickets too.

So while my father hit the restroom Alison's friend and I went in to scout out seats while Mom waited outside to give the tickets to Brad and his friend.

We found seats and were waiting anxiously. Would Brad and his friend get there in time? From what they'd said, they'd get there shortly because they'd not stopped at all. But whether they'd get there at 9:45 so they could get into where the live graduation was, I didn't know.

As 9:45 approached I wondered if Mom should just come in and leave their tickets with a marshal or something. Then they arrived at pretty much exactly 9:45. We all breathed a sigh of relief as they settled in... 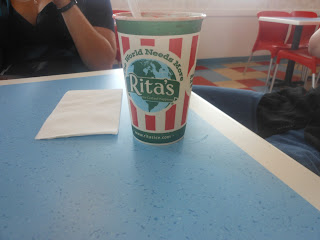 And then we opened our programs and found out that it was 9:55, not 9:45 when they stopped admitting people.

Afterwards we went to a delicious reception the college had for its grads, and then we hung out talking and taking pictures until we decided to split up the group. My parents went to get coffee while the rest of us went for Italian Ices. We met back up, joined by Alison's former professor and mentor for an early dinner at Applebee's. It was delicious. We parted ways with her mentor and went to Alison's home. She's been renting a room in the house of an older woman this semester. We loaded up our trunk and Alison played with her favorite graduation gift... a new laptop from her fiance! It was especially awesome because she'd been given a laptop from the college... that she had to turn back in now that she was graduating. So she was able to transfer over all her stuff to her new laptop before saying goodbye to the old one. 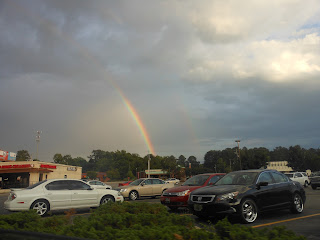 Ali stayed there for a few more days, but we said goodbye and left to come home. We decided to hit Starbucks before driving back up (having woken up at like 5 something am) and on the way there was the most amazing rainbow! It was a full arch, you could see it all.. but my camera couldn't. It was simply too big to all fit in, so I just have a partial for you.

On the ride home... we almost had an accident. Apparently a charcoal grill had fallen out of someone's truck and was in the middle of the interstate. It was solid black, so you couldn't really see it until you were almost on it. We saw someone swerve in front of us, so we were on alert and avoided it. My mom called it in to the highway patrol... but we shortly after saw another car in the other lane which had a headlight dangling that we think was probably from that menice.

But we got home safe! And Alison graduated! It was a pretty awesome, and exhausting, day!