I apologize for my abrupt departure from the blog for the last week and a half. On Thursday, June 21st I was at the library and discovered my netbook's power cord was broken... a fact which I only discovered when I had about ten minutes battery life left! So I quickly wrote a blog post to explain what I was sure to be a couple day absence and when I was just, yes JUST about to press publish, the computer went black.

Then two days later, my parents went out of town for week, taking with them my normal internet supply. We use my mother's cell as a wireless hub in our home. I had expected that, and planned to tell you I'd only be on once or twice that week (when I went to a wifi location) only I couldn't tell you that, nor could I go to those locations without any power.

I am currently writing to you from the office of the Spartanburg Science Center, where today I was working cleaning out snake's cages. Yes, I have stuff to share, but alas, my time is short. My cord is still not fixed and I'm not sure when next I'll be on, but when I do, prepare to inundated.

Below is the post I wrote back on June 21st! 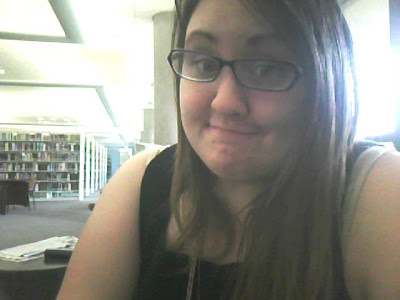 Today I am at the Spartanburg Headquarters Library, set to enjoy a happy day. Last time I was here, I forgot my netbook's power cord so my online time was very limited, especially since it wasn't charged! This time my netbook charged and powercord in my bag I was looking forward to a happy highspeed internet afternoon.


After using up most of my battery catching up on facebook and emails, I was going to write a blog post and saw my battery was low, so I decided to plug it in.


So I thought it must be that plug in station, so I went upstairs to find another corral. I did, and I tried to plug them in. Didn't work. Tried another. Didn't work.


Worried now it was my cord, but also aware that maybe the power has to be switched on and I'm not really sure hwo or something, I looked for the plugs one of the library's machines were plugged into and tried it there, kneeling on the floor next to it. Nothing.


I had given my cord a cursory examination and hadn't seen anything wrong, but now I went carefully centimeter by centimeter and found it. It has been injured.


So my cord is broken and my battery has less than 10% remaining so I thought I'd write you to explain my absence. I may be able to splice it, but if not I don't know when I'll see you again as I cannot afford to buy a new cord.


God is sovereign, so He has a reason I am now stuck in downtown Spartanburg with no computer and won't be picked up for another three hours. Now I need to pray and figure out what it is He has for me! God bless and hope to see you very soon.