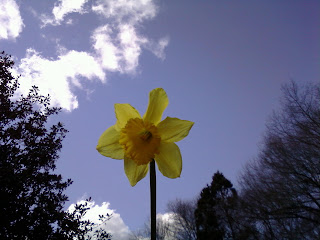 Nothing has really changed, and a few things have actually gone bad already. But I'm holding on. I was thinking to myself how a lot of the troulbe with yesterday was pain at how, in the way the world measures things, I appear to be a failure.

But I am not of the world.

So I would be in trouble if nobody had a negative opinion of me!  Actually, as I was searching biblegateway for the above verse, I came across the following:

"If you died with the Messiah to the elemental forces of this world, why do you live as if you still belonged to the world?"  -Colossians 2:20

Why indeed? Why do I care about people's good opinion of me? Sigh.

I'm just a little girl struggling to keep up with her Daddy.

This world is like a bad neighborhood on an island, full of violence, crime, prostitution and drugs that murders anyone who tries to improve it. Things have gotten so bad that outside authority has decided to just blow the island up. But, from love and compassion, that authority set up a rescue plan. The rescue plan isn't coming and cleaning the island up. It's rescuing individuals who are willing to submit to the authority so they won't be destroyed in the fire storm.

So now I'm one of these, trying to learn from my rescuer and reach out to my neighbors and say, "Come with us and be saved. Choose life." There's a community of us on the island, waiting for the rescue boat.

But most of our neighbors won't accept it. They deny the authority exists, because they don't want to lose their power. They ridicule or kill any who declare our truth, because of what it would mean for them. They say if we want to do good, then invest more energy in cleaning the island up.

But while we will fix some roofs and fill some bellies out of love, our focus needs to be not on being good islanders but on getting others to join us and preparing for our new home.

Because this island will be destroyed. We didn't decide that, but it is a fact. And that's why we can't get too invested here. The only thing that will be saved are the people who put their trust in the authority that loved them enough to put the rescue plan in action, at an incredible cost.

Stepping out of the allegory, I want to live the kind of life where when I look at what I invested in it all counts for the kingdom.