Sight is Kind of Important 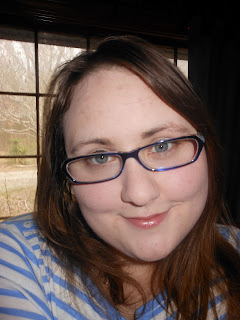 You know the phrase "you don't know what you have until it's gone"? I found that out the hard way.

Some years ago, I started suspecting my eyesight was weakening. It started when I was seated in the passenger seat of a car driving on the interstate and the driver asked what a sign said and people in the backseat read it a good half second before I could. I was surprised and thought "huh, maybe I need glasses." But I put it out of my mind.

Then like a year or so later Tabby and I were going to watch a movie and needed to know showtimes. We pulled up in front of the theater and neither of us could read the sign. So while Tabby kept the car running I got out and went up to the sidewalk... but couldn't read it until I actually got on the sidewalk.

Yeah.. that's when I knew I needed glasses.

But I'll be honest: I have never wanted glasses. I really love my eyes and I just think eyeglasses can really change the way you look and are perceived. So I still put it off!

Finally, I hid from the truth no longer when I went to the dmv and *just* squeaked by the vision test. So I went and got two pairs of prescription eyeglasses.

At the same time I had gotten mine, my friend Lydia got her first pair. Unlike me, she was excited. She got bold plastic frames to express her personality. I got thin wire frames because I wanted them to disappear into my face. And they did... and they also disappeared elsewhere.

But then something interesting happened. I missed them. I was too broke to get another pair, but my unemployment didn't make me less nearsighted. I'm by no means blind, but for example the words on the satellite's guide will blur from the other side of the room. There's enough occasions that I really missed them... so when I got that seasonal job last November getting some cheap eyeglasses became a priority.

And you know what? I was inspired by Lydia and I looked for glasses to reflect my personality, not just fade into the background.

Sometimes God takes things away so we can appreciate them. He wants us to cultivate an 'attitude of gratitude". After all, giving thanks is His will for us! And He humbled my pride and vanity because I realized... sight is kind of important!

So now for some fun! The people at GlassesUSA.com have provided me with the cool "mirror" below so we can play at trying on glasses! I'm sorry it's too big, I tried to adjust the size and it cut the edge off. So have fun playing makeover. And if any of you like a pair and want to buy it, you can use the code Blog10 to take 10% off, or FS15 for 15% off and free shipping on orders over $50.


This is a sponsored post. But the writing is mine, the story is true, and I felt this was in line with my blog.
Posted by Pamela M M Berkeley at 1:16 AM