Wedding Wednesday! (And a Recipe)

Wow, what a week this has been!

For one, Ryan and I bought my engagement ring! It is beautiful, I am in love. But no, not sharing pictures yet. It is still being shipped, and once it arrives I'll need to get it resized.. so it will be at least two weeks until I show you. 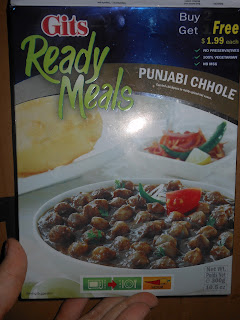 In the meantime, I can share a recipe!
You may have noticed I don't share recipes often, but that's primarily because I don't have my own kitchen... my mom doesn't enjoy cooking for others, and I don't control the grocery list so I cook rarely and get to try new recipes even more rarely.

I adore Indian food and, as I'm moving to India, would love to make some Indian dishes. However, my parents both despise Indian food and its mouth watering aromatic qualities... and don't want it cooked in the house.

However, I have figured out something I can try... Indian breads!

The Friday night Bible Study I go to each week is potluck, so I've been getting "Gits Ready Meals" from the Indian market in Spartanburg and making an accompanying bread. These meals contain no preservatives or MSG and come pre-packaged so I can heat them up in the package inside, then come outside to transfer them into a bowl before I leave, thereby avoiding Indian food smells indoors.

So with Punjabi Chhole, a mild chickpea curry, I made bhaturi, an Indian yogurt based bread. That's the recipe I'm going to share with you today.

All you need is:

I totally used peach yogurt, because that's what we had, and it worked great but they probably meant plain.

You put the flour, salt, baking powder in a mixing bowl, then mix by hand until a smooth dough is formed. Make it into a ball then cover the bowl with plastic wrap and store in a dark, warm location for at least five or six hours. Yep, hours.

Now, the instructions said it will get fluffy after that... mine didn't and I was mildly panicked. I didn't need to be, it turned out fine. Actually, I've made it a couple times now, and still haven't seen fluffy.

Still, fluffy or not, punch the ball of dough to get any air out, then knead again until dough is "smooth and elastic".

Then you break the dough into little balls... or larger ones.

Then you roll the dough balls out flat. I made mine around three inches in diameter (the recipe called for six but also calls for you to boil them in a large pot filled halfway with oil, but we didn't want to use up that much oil, so we used a medium pot and just made smaller balls of dough.)

Heat the oil at medium heat. Test the hotness by dropping a teeny tiny ball of dough into it. If the ball quickly rises to the surface and sizzles, the oil is ready. Be careful not to overheat. The first time I did it, I had my dial too low and had to incrementally increase it to get it hot enough, and it ended up perfect. So the next time I did it I put it at first where I ended up last time.. and it got too hot and burned some of my bread.

Carefully place the flattened dough in the oil.  In 5-7 secs, turn gently with a slotted spoon (this is important) . Wait another 5-7 secs and press the center of the Bhatura with the spoon, which should cause it to puff up! (sometimes I had to prod it twice)  Remove when both sides are golden (for me this was just one or two seconds after puffing up). 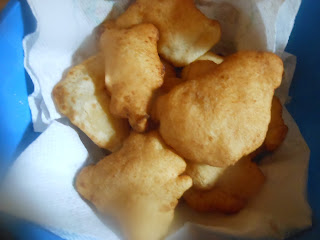 This was a really delicious recipe I got here. And here is a recipe for chhole in case you don't have a ready meal. They really go wonderfully together.


In case you're wondering "What does this have to do with Wedding Wednesday?" well, I want to be a good, home cooking wife! Of course, Ryan is more interested in the American food I'll cook and isn't used to home cooking. He, his mother, and his father live on take out! (I had envisioned bonding with my mother-in-law as she taught me to cook his favorites, but oh well.)

I guess I'll just have to domesticate him myself!