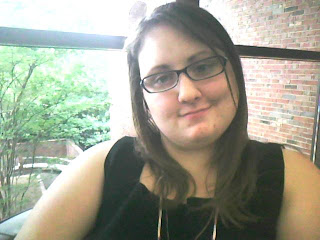 So I told you I had a great weekend last week, but didn't tell you what happened!

Well on Friday I was home alone all afternoon with bread to bake to go with the Indian ready meal I was making for our pot luck dinner we have at Bible Study. I ended up making roti... and you know what? I'll do a recipe post this weekend because it can stand on its own.

Erika picked me up for Bible Study. Some weeks I go with her, other times Jane and Darryl, and some weeks I don't have a way. Erika often works Friday nights, and only lives 6 minutes from me, so if she goes, we ride together.

After an amazing dinner, (with cream cheese brownies... mmm) we had Bible Study, whose theme was Experiencing God's love. I sat with Erika and Lydia, and Lydia had had a bad day. I ended up sharing a hard time I'd gone through where God came through. Afterwards, Lydia and Erika whispered frantic yet giggling apologies because they'd been laughing during my very serious story. Honestly I was so caught up in my story I didn't notice. But they explained that they were laughing at my markedly pronounced accent.

I should explain. While I have spent most of my life in South Carolina, I was born (and learned to talk) in New Jersey. Most of the time I have an almost neutral American accent... BUT when I hang out with people I from the small, rural town I went to high school in, Woodruff, I just absorb a thick southern accent. Erika went to high school with me.

It's dramatic enough Ryan will ask "Who were you with?" because of it. I told this to Lydia and Erika and we all giggled. Then I took it a step further. Wait, this is funny when you know that because Ryan lived in California from age ten to sixteen he has more of an American accent than an Indian one, despite being Indian, born in India and living there for the last decade. So I said, "Yea, I absorb accents. It makes me wonder if I'll develop an Indian accent while Ryan has an American one." Then we started roaring with laughter... in the middle of Bible Study.

Everyone was looking at us... but it was a good thing. The laughter ended bringing levity and joy in. It helped lift Lydia's mood, encouraged people to open up and overall was a good thing. 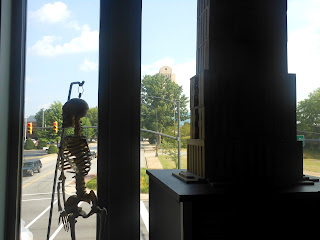 On Saturday, I got up and carpooled with my sister, Alison, into downtown Spartanburg. She worked 10am- 5pm, so she dropped me off at the library around 9:45. I enjoyed the high speed until noon, then left and walked to Papa's Breakfast Nook to get Alison lunch. She can't leave her building to get lunch, so she was super excited at the idea of me bringing her something hot.

As I was there I met Aimee, a young woman Alison was training... and an etsy artisan. I was in the mood to be bold and said (after explaining I'm a blogger) "Do you want to do a giveaway?"

Without hesitation she said yes!

After lunch, I checked my phone. I'd wanted to see if Lydia wanted to hang out. She did, and would meet me at 2:30. We worked out the details. And under a tree I spotted a white dude with dreads, a guitar case, what looks like maybe a digeridoo and a few other bags. Interesting.

So I called out in a friendly voice, "Whatcha doin'?"

"Oh, okay..." I stood there for another couple seconds with a 'I'd like to have a conversation' look, then slowly turned away.

"What are you doing?" he asked. I turned and came closer, telling him.

It came out he was from Asheville and was on his way to Florida to stay with a friend. He'd been hitchhiking, but apparently was told he'd be arrested if he tried again. I told him about megabus, which I used to get a round trip ticket from Charlotte to NYC for $28. He was excited, and I was happy to help. As I turned to leave, I realized he probably didn't have internet access to buy tickets, so I gave him directions to the library.

Then I went to a jewelry store downtown to get an in-person quote on re-sizing my ring. Then I headed to the library with about 20 minutes until Lydia should come. As I walked across the parking lot I spotted a woman sitting with an adorable puppy.

"Want to meet him?" she asked... which led to a 45 minute or so conversation. She's homeless and we discussed that. Apparently our sheriff has declared war on homeless people. She got a ticket for sitting on steps and pouring her puppy water. She may have to go to jail for 14 days, and if she does they'll take her puppy to the pound.

We also discussed the Bible. She was very knowledgable, having even studied the Greek. I at first thought she was a believer, but she said she'd lost her faith because men, imperfect men, wrote the Bible. I tried to explain about the Holy Spirit working through them and said how I heard from God. She looked at me like I was crazy. I told her about one of my adventures with Him. She told me how a nearby church has a dinner on Friday night and she'd gone one week. The next week she went and they said she wasn't welcome. I told her that was un-Christian, but Christians are people in progress, not perfect. (She wasn't impressed.)

It wasn't just her, a homeless man who was her friend joined us too. We also talked about India and stuff. I got a text from Lydia that it would be 3.

It would be 3:08 actually. Then we headed to a new hangout downtown and talked for twenty minutes or so... then had to hop in the car to go pick up Katie. There was a 4 o'clock Bible Study at Chick Fil A. Lydia used to work there last year and started a Bible Study with her coworkers. Our friend Katie joined. And Liz, who Lydia and I went to Converse with and I hadn't seen in a while. We studied John 8, then it was time to go, Ali pulled up and I went home.

On Sunday, I got up and talked to Ryan briefly and went to church. My ride was going to the early service. Then I went to Sunday School. We're in Exodus, and it was great.

Then I gave blood. My parents ended up coming and giving too. Then we stopped by Costco where we bought some good stuff and forced Mom sit down because she got dizzy.

It all took longer than we thought, so we didn't get home until 2. I had a quick iron rich lunch, took the dogs out, changed into a tshirt, tried to call Ryan and got his voicemail... then it was time to go to Anne's house.

I came early to help her get ready for the new women's Bible study we're starting. She baked butterfinger cake and I made a black bean casserole we served over quinuoa. Erika showed up at 4:30 and we had a good time, ending around 6.

Then Erika and I went to our respective homes to shower and change before coming together for Merge. She picked me up a little after 7.

Merge is a young adult gathering at the Hangar of First Baptist of Spartanburg. It's called Merge because it isn't just for young adults from one church or denomination.

It was while I was worshipping at Merge that it all came together, which I wrote about on More Than This Monday.

After the service, they have a get together with refreshments. They had pizza. Oh! And they gave out free water bottles and I got a coupon for a free Chick Fil A sandwich!

It was a terrific weekend! A God blessed weekend.
Posted by Pamela M M Berkeley at 10:46 AM