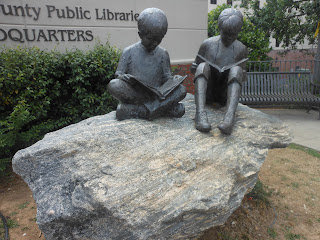 I started out in the downtown library a little before 10 am. I worked on the blog! Then at noon I met my friend Emily for lunch. Then I did about a half an hour more on the blog (by on the blog I mean not only writing but correspondence, social media and networking.) Then I walked to a downtown jeweler where I've selected to have my engagement ring re-sized and dropped it off.

Then I went to this really cool new place whose name alludes me... something with a "P" that's a cafe and a booth store. The booths are rented to artisans, crafters, artists, consigners and collectors who sell their wares, creating  a really cool atmosphere. It's really cool. (I don't remember the name of it, but it's on Main Street across from Denny's Plaza and has a green marble front.) 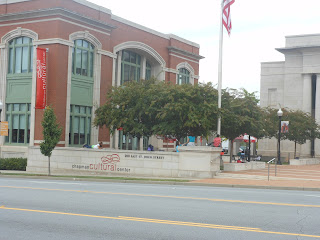 Then I headed over to the Chapman Cultural Center. My sister Alison works there so I knew they were having a big free day, where admission was waived. I checked out the art gallery first. There was a room right when you came in, the Artist's Guild, where one artist was having a show of landscapes, impressionistic woods. That was pleasant. Then in the hallway leading to the main gallery there was a show from Spartanburg School District 4... which is where I went. I got into gifted art in third grade and did both AP 2D and AP Drawing in high school. I wanted to do AP 3D, but couldn't fit it in senior year. So I'd had the same teachers and similar training to the young artists whose work was displayed, and it was interesting to ponder.

Then I went into the main gallery where there were two shows. One was a juried art show, and the other a collection of still lifes. I was moved by many of the pieces in the juried show. They were amazing and I was inspired. I wish I photos, but of course I don't... 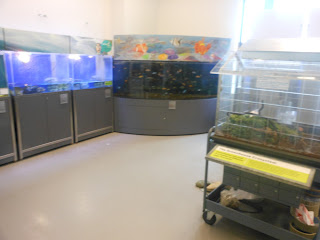 The still lifes were so precise! But I have to admit my favorite part of that exhibit was the copy each artist had written about their art, it really opened their work for me... at heart, I am totally a word girl!

Then I went up to the regional history museum. I'd been before, so I merely perused the permanent collection. But I deliberately went through the rotating exhibit, which right now is random artifacts. Then I left through the back which let me see a textile art exhibit including beautiful quilts of local landmarks. 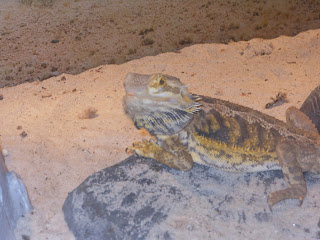 Then I sat in the courtyard and read for a little bit, then headed up to the Science Center, where I hung out with Alison and Aimee (of Queen Etheria). Then they had to help people and I began writing this...

But before I got very far it was time to go. Alison was going up Charlotte to see friends, so she dropped me off at Barnes and Noble. I did a quick lap, then had settled into the cafe for just a few minutes when my mom showed up to pick me up. 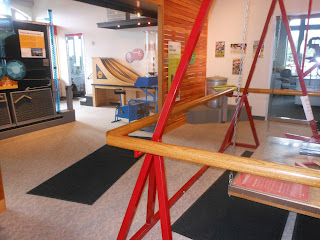 We were driving towards home when I realized we were about to pass the Indian market. I'd been enjoying bringing Indian food to my Friday night Bible Study, which is potluck. But I'd run out. I planned on going in, grabbing three different Gits Ready Meals and going... but they only had one variety and I wasn't even sure if I'd like it. So I grabbed one, because I'd certainly would try it, but then kept wandering the store tryng to decide what else I would get... I didn't want to just get one meal, since I get to the shop so rarely. It was crowded, which was unusual. I saw a basket of these dance stick things, which made me remember this festival. Many years ago in college I went with my Nepalese friends to a Hindu festival where we danced with sticks like those. It was sometime in the fall I think, so my guess was maybe it was coming up and the crowds were shopping for the festival.

My mom bought some ginger root, a bag of rice flour, and some rose water, then grew fed up with my indecisiveness left the store to wait in the car. I dithered a while longer before buying the one ready meal and a snack called kachori.

Then we went to Ingle's, a supermarket a little ways down the road. I went to get some ketchup and on the way back to Mom I spotted an Indian section. They had a different, but similar brand of meals. The price wasn't marked, or as it turned out, in the computer so they made up a price... which I accepted. It wasn't quite as inexpensive as the Indian market, but I was still pleased.

Then we went home, had dinner and went to bed... whew! But a good day!