Because you know, we can't be normal. 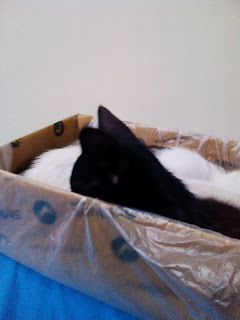 They are seven weeks old little kittens, a brother and sister. Princess Panchali is the sister, as you may have guessed, and she's the black one. Vex is white with brownish gray tabby spots.

Anyway, I just wanted to share the big news and what photos would load. We now have broadband, so you should hear from me more often. We're probably 90% or so unpacked and settled in.

It's late here, so I'm going to run. Blog again later!
Posted by Pamela M M Berkeley at 1:02 AM