I have started at least a half dozen blog posts, I really haven't been neglecting you I've just been horrible on the follow through.

Consequently, I've decided I'll just sit down and write until I'm cooled off, and then publish it. No worries if it's perfect or if it's "complete" or whatever. 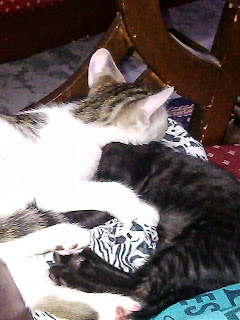 I just got back from the stores. I had to get a prescription, a cleaning agent, conditioner, and veggies, milk and bread. I also wanted to get some more things, like spices and yogurt.

The bags ended up being very heavy, and so when I walked home with them, I was dripping sweat. (Honestly though, you do NOT have to be carrying something heavy to drip sweat in an Indian summer. You don't even have to move and you WILL perspire.) But what was especially hard was the hike up the stairs. We're on the "third floor". Which for Americans, means the fourth floor (they do ground, first, second, etc here). So I was huffing when I got up and fiddled around to find my key.

So I'm sitting down with the fan on, just cooling off. And honestly, I am acclimating. I remember thinking the other day "Wow, it's a great temperature. It's got to be in the 80s" and looking it up and guess what?

Yeah. So obviously my blood is thinning.

Most days it gets up to 108 or so, and some days it's been 115. We only have air conditioning in the bedroom and we barely get to use it. After living here just over one week Ryan did the math using the meter, and we'd already almost used up what we'd thought an "average" month's power would be... but we also knew that it wouldn't be an average month because June is the hottest month of the year here. We hadn't been using it crazy either, just while we sleep and maybe an hour or two in the afternoon when it's the hottest, and usually on Energy Saver setting. But our AC is a two star power rating, so it doesn't really matter.

Now Ryan's trying to have us sleep without it. Last night he set a timer on it so that it would be on for the first two hours of us sleeping, but would go off after that. I thought that was brilliant, actually. I don't know how to do that myself.  And it worked okay, though I was roasting when I woke up and took at least a half hour to cool off. I can't sleep without at least a thin sheet on me, so that adds to that.

At night it does drop down, but generally only to the 90s. So it's hot all the time.

One thing that's not too bad though, is the reason we chose the third floor. It might seem that since heat rises, it'd be really hot up here. And compared to the ground floor, that's true. But most of the buildings surrounding us only have three floor (ground, first, second) so the third floor gets... a breeze. And so if we leave our door open (just the screen door) we get a nice breeze through the house. And it makes our balcony very pleasant.

A storm is threatening to come... but the skies aren't as dark as they were so I am not sure it will happen. The other day one was threatening, but didn't appear. It did sprinkle today, mist really, for about five or ten minutes earlier. I have clothes on the line, but Ryan and I talked it over and decided to leave them. The other day I took wet clothes in and had them strewn about the furniture... and the cats pounced on them and it all looked like a huge mess. I have no place to hange them inside right now, so might as well leave them outside, the worst that will happen is wet clothes will get wetter, right?

Monsoon season comes next month, and Ryan and I have to get one of those inside drying rack things. Keeping the kittens from climbing all over that will be a challenge though! :)

I'm going to be making Pav Bhaji later. It's the first time I'll be making an Indian dish from scratch, really. I've made Indian breads and a dessert and such, but I haven't made an Indian main course by myself. Well, I've like cooked seek kebabs and parathas and made that into a roll (Indian for 'wrap'), that's a main course. But I'm talking multi-ingredient, multi-step main meals.

Pav Bhaji is a vegetable soup/stew you eat with rolls... actually the rolls are the "pav" and I bought those. So I guess I'm not making the whole meal from scratch. Haha.

I will be experimenting with what I can bake soon though. We got our microwave on Monday, and it's a microwave/convection/grill combination. I haven't really played with the convection yet, but I grilled us hot dogs and potato wedges. We bought a cake mix so I can bake it and see how it works, but I haven't gotten around to it.

All right, I think I'm cooled down, I should probably go and check and see if any of the laundry is dry and prep to make the Pav Bhaji.

Email ThisBlogThis!Share to TwitterShare to FacebookShare to Pinterest
Labels: food