For a while now I've been eyeing this link up called "Desire to Inspire" over on A Royal Daughter. I
haven't linked up before because, well, I've been struggling to blog regularly lately, neglecting previous things like More than this Monday. But Ryan and I were discussing my blog yesterday.

Not just my blog, but all the work that God's given me to do right now. He's just recently revealed new and exciting avenues... and I am delighted. But I'm also nervous. Because I've never been great at finding balance. Juggling is the death knoll of effectiveness in my life, that is, in the past. I always start strong and optimistic, but end up dropping balls left and right until I curl up in the corner, feeling worthless and like a failure.

Hence probably why God is tossing me more balls. God gave us limits, and He does think it's good to respect them. Hence why He instituted rest as a Holy practice, in Sabbath, in meeting Him in the mountain places. But while God didn't call us to frantic lives with no rest, He also didn't call us to laziness or hiding in the dark saying "I can't do it." So He's lovingly pushing me to do more, which I'm totally excited about... but I will drop balls. Not because I'm a failure, but because I've just not mastered this juggling skill yet.

You know, when I was a baby I had chronic ear infections. It last until sixth grade. Both of my ear drums burst from pressure, which has had an impact even to date with hearing. And I still can't swim deep under water, it hurts too much. It totally messed up my balance while I was learning to do things that came so easily to other kids. I couldn't ride a bike until I was nine.

But my parents are awesome, loving parents. So while the other kids were zooming around the neighborhood on bikes... I got to join them.  They got me a scooter, long before anyone in the world seemed to know what they were. The first time the new kids would see it they'd think it was strange, try it out, and then it was no big deal and I was going down hills with the rest of them.

God is just as loving a parent as my parents, and of course, even more so. For some of His kids, balance seems to come naturally. Oh, I'm sure most of those would say it was a challenge, maybe that it still is. But wobbling for a week or two and acknowledging if they lose their balance they fall is not the same as just never seeming able to ride the bike at all. And I admit, transferring this back to balancing life skills, I seem to be similar to my childhood experiences with the bikes.

I stare at the awesome, accomplished women in my life and I'm like... how? How do they do it all? And perhaps due to a sadistic streak, I am attracted to accomplished women in friendships, let me tell you. I know, I know we're not supposed to compare. But I confess, I do it. And I always feel like such a failure in comparison. Less so, as time goes by. At least I'm married now. Oh, yeah, I'm totally laying it on the table, but I remember a few years ago looking at how this one was earning that graduate degree, this one was excelling in her chosen profession, and that one was married with a baby on the way... and who was I?

We all know that's not how we're supposed to live.

Yesterday, I knew I was getting too unbalanced. I wasn't able to get a blog post written. I had barely gotten anything else done. None of this was through lack of effort, but instead inefficiency of it. I realized I needed to turn to my Father.

I went and knelt down and prayed and read my Bible. Then I lay down and asked God to give me wisdom to understand what I read, to give me more faith, and more love, and discernment of His Will. I asked that He guide me.

It was hours before I was "supposed" to sleep. I left a ton of things unfinished. I left my poor husband locked out of the house so he had to wake me up when he got home at 2am to stumble out and let him in (I'd latched it on the inside. I'm supposed to either be awake to let him in or lock it with the key only so he can let himself in.) Then I went back to sleep.

Now, in the light of day, I sat down to write this blog post. Truth is, I'm not sure how eloquent or inspiring I'm being. But I think there's something in the fact that when I asked God to guide me, I fell asleep. I have faith enough that I know if I wasn't supposed to sleep, He'd have woken me up. So I asked for wisdom, love, faith, discernment and guidance... and got rest. 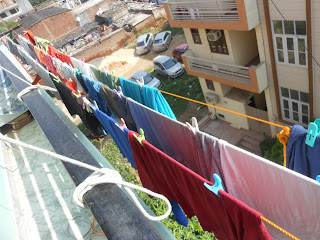 I'm not sure the words to wrap that up in an understandable way, but I do think there's a message in there. I was trying too hard. And as I already said, I was being totally inefficient. I think God was telling me to get some sleep and concern myself with it tomorrow.

The house didn't burn down. There's no disaster. Even the laundry that I hadn't yet hung to dry and was in the washer didn't smell when I just went and hung it up. Sure, I didn't get much done yesterday. But I think God measures our work differently than us. I think if I'd toiled the rest of the day away, hung up that laundry, published a blog post, been awake to let Ryan in, hadn't left my dinner bowl out, etc... I still wouldn't have accomplished anything. Why? Not because there can't be joy or meaning in small things, no. But because I wouldn't have been doing it for the right reasons.

I've been struggling for balance so much lately that I've been trying to do things just to get them done. I mean, yeah, I'd like to do them right. Yes, I'd like God to speak to someone through my writing. Yes, I want to please Ryan with having the house clean. Yes, none of that is bad. But it's about my primary motivation. And lately, my primary motivation has been one of frantic panic really. It's been like "What can I do so that I have something to check off my list? If I don't get something done, what am I worth lately? If I don't make some progress today, I fear that I'll be swamped and overwhelmed tomorrow."

No wonder I suck at balance. Why would God let me succeed if that's what's pushing success? There's far more to be learned in failure.

You know, when I learned to ride a bike it wasn't a great tale of triumph. It wasn't tons of hard work paying off. It was simply for Christmas when I was nine, I got a bike. I hadn't tried to ride one in at least months, maybe years. And I got on... and I learned to ride. In like an hour. It was no big deal. It was exciting, yes. And there's an awesome story behind the gift of the bike, because that was the year my mom had cancer. But actually learning to ride? It was nothing. It was easy. When I was ready, it just happened.

Maybe there's a reason God had me think of balance in terms of my ear infections. Maybe (and I'm not sure, but I do think the Holy Spirit is with me and guiding me) the message I'm here to tell myself and maybe some of you is that maybe I should just stop trying to ride the bike like the "other kids" and scoot along in my "scooter" for a while. When the time comes to master the bike, maybe the bike and the balance will just be provided. Worrying about it will accomplish nothing.

And lastly, one of the beautiful things I saw coming as I let my weirdo brain and the Spirit weave me through this blog post is this: maybe finding balance will be like learning to ride a bike. Maybe once I learn, I'll never forget. You know, once I learned, I rode it all the time until high school when I got too busy with another kind of balance. Perhaps that's why the learning has taken me so long, and why I still haven't mastered it. Once I get it, maybe I'll get it. And the truth is, God teaches us more in our struggles than in our successes. Perhaps He's delaying success in order make progress in me spiritually.

I think today I'm going to sit down with my husband again and talk about what God is asking from me in this time in my life. And I think today, the focus will be more on Him and less on accomplishments.