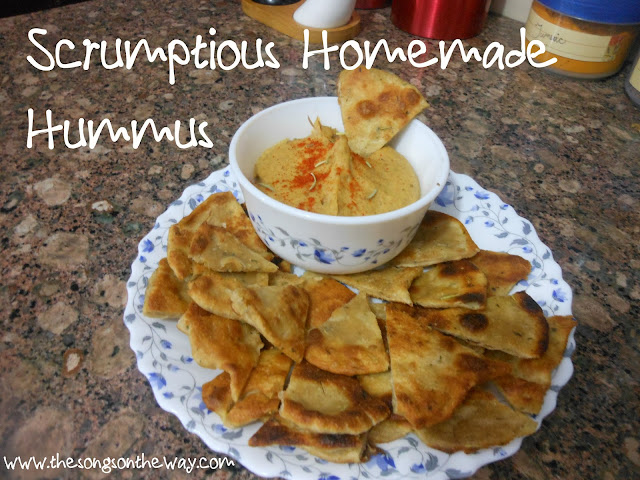 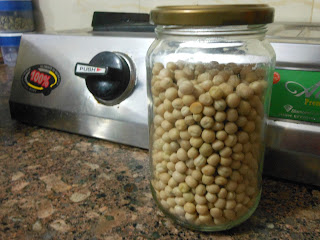 So it was a spur of the moment decision last night that I was finally going to do it, and launch my efforts into making hummus. It's been something I've wanted to tackle for a while, but I hadn't mainly because I have dried chickpeas and I never remember to soak them in advance.

I'd never made hummus before so this was new to me. And, as you'll read, it was sort of a creative adventure. But the result was good, and I'm going to share the recipe with you today! Actually two recipes, and a third tomorrow. Today will be hummus and flax seed tahini!

I'm going to tell the story of making it, but if you just want the recipe, just pay attention to the bolded words. I've bolded the ingredients and necessary steps. 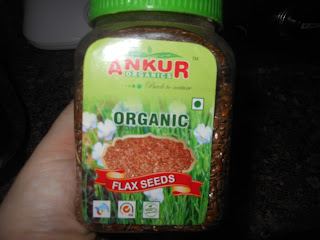 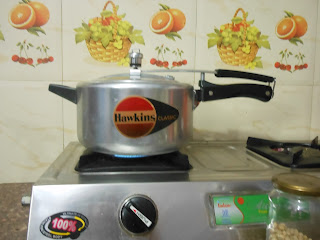 (If soaking and cooking dry chickpeas, 1/2 teaspoon baking soda is also recommended to help absorption, as well as four cups of water to soak in, then four more to cook in.)


Tahini is generally made with sesame seeds. Today I'm using flax seeds. I also saw recipes online for half sesame/half flax. I didn't happen to have any sesame seeds, so I just used flax. I did have to add a little more olive oil for the flax seed, as you will see. So I began by doing the "quick soak" method on my chickpeas. If you're using canned or you soaked them in advance like a good planner, you can skip this. I put 1 cup dried chickpeas in my pressure cooker with 4 cups of water and 1/2 teaspoon baking soda. I then put it on for 1 minute, then turned off and let stand for an hour. If using a regular pot, not a pressure cooker, put a lid on and bring to a boil. After two minutes, remove from heat and let sit for an hour, with the lid still on.

Now, you know how at the top I told you it was a creative adventure? Well I was surprised my pressure cooker didn't whistle, but figured it was probably just because it wasn't on very long... 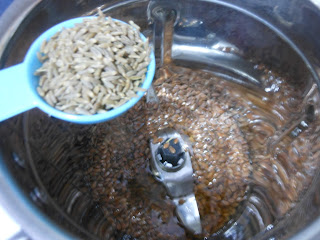 Next I turned to making the tahini. Now, I'll confess I'd never heard of tahini before. Well, I had read it on a menu in a restaurant, but I didn't really know what it was... a quick search told me it was a sesame seed butter. Well, that was going to shut down my efforts.. except I wondered if I could use flax seed? Another google search told me yes, some people did do that! Score!

I put my flax seeds in the blender along with my olive oil. At this point I only put in 2 tablespoons, as I hadn't yet discovered I'd need more. Now, I thought it over, and I added the tablespoon of cumin too. Why? Well I didn't have ground cumin, so I figured I'd make sure it got ground as well. If I was making tahini for another reason, I wouldn't have done this, but since I was just making it to add to the hummus, this worked well. 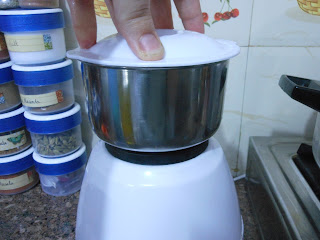 Flax seeds are tougher and more fibrous than sesame from what I read online. If using sesame seeds, the people online say you only need to blend for two minutes, though it may depend on how powerful your blender is... mine is just an entry level blender, so with the tougher flax seeds I had to blend for ten minutes or more. This wasn't a straight ten minutes, but instead I kept checking it. It began to get a little thick. It's supposed to have a peanut butter consistency, and so if it gets too thick, add a little olive oil.

One thing I did do was scrape it down the sides to make sure it all was getting blended well. When I finally decided I was satisfied with the consistency, it was still grainy. But it was around the texture of that natural, organic peanut butter, you know what I mean? A little grainy, but nice.

I set the tahini aside and turned to the chickpeas.

However, after a few minutes I realized that the pressure cooker still hadn't whistled! Alarmed, I check it out. Even though I only got my nice, good brand pressure cooker a few months ago and have used it probably less than ten months ago, apparently there is an issue with the safety valve. So I had to do the cook for an hour method. I tried to just take the weight off and boil with the lid on, but it began threatening to boil over. So I had to get creative and use a different kind of lid. 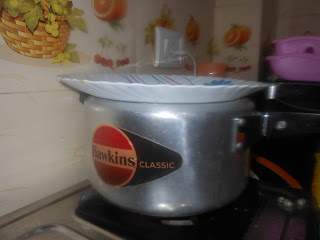 At this point I also added one of the cloves of garlic, diced, to give the chickpeas a little bit of cooked in garlic essence. I also added a sprinkling of salt and baking soda for absorption.

I checked on the chickpeas when they were partially through and noticed a lot of the skins had just come off and floated up. A lot of tips say to remove the skins, but here I found people taste testing both methods and saying they found that while it was a tiny bit creamier if you remove the skins, it's still good if you don't and the effect is not so dramatic as to be worth the effort. The way I took that was if you want really creamy hummus, remove the skins, but it's not necessary... so I figured with the way that they were just floating up, I'd fish a bunch out, but not go crazy and even try to get them all. That would make my hummus creamier than if I didn't even try, but not taking them all out wasn't going to ruin it either. 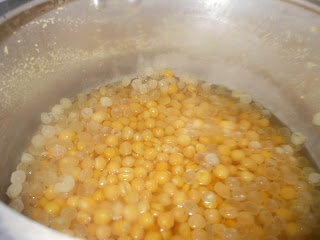 I am very glad I did this... but not for the reason I explained above. Crazy adventure, right?

Well, I got very busy with making the pita bread. As I said, I will write about that tomorrow but it needs mentioning because after a while I was smelling a burning smell. I thought it was just from over browning the pitas... but then I realized what had happened. All the water in the chickpeas had evaporated! They were starting to burn!

I'm not happy that the chickpeas burned, but I am very blessed I noticed when I did. The bits that burned clung to the bottom of the pot, while the not burnt chickpeas (the vast majority of them) came out of the pot very easily. Indeed, only portions of individual chickpeas burned, and the unburnt portions came way with a little pressure from a spoon, while the burned parts stubbornly adhered to the bottom... which is great! That meant that I had plenty of chickpeas and no burned parts to add to my hummus... 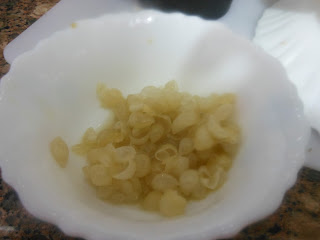 But what I didn't have was any water from cooking the chickpeas!

Remember how that was an ingredient at the top? You're supposed to save a 1/2 cup of water from the cooked chickpeas when you drain them. Since my water was all gone, I was debating just adding plain water, but what I'd read online (I had looked at like ten different recipes) said that it makes a huge difference in texture.

Then I remembered the husks! When I'd fished out the skins from the water before it all went away, some of the water came with it! Not a lot, but I had more than a tablespoon of chick pea water. I put just plain water in to make it the full 1/2 cup, and the texture came out perfect, so that was enough. 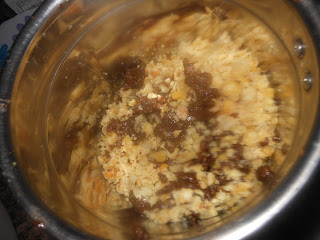 So now I put into the blender my chickpeas, chickpea water, tahini, olive oil, the other diced garlic clove, the paprika, garlic powder (I love garlic!), and the vinegar. I didn't have any lemons, so I was glad to read about vinegar as a substitute. You can also use limes, or interestingly perhaps amchur (dried mango) powder... which I also didn't have, but can get easily here in India. It also would have a longer shelf life than lemons. Some people also recommended using apple cider vinegar instead of the white that I used. I haven't seen apple cider vinegar since I got here, or I might have tried that, since the health benefits of are well known. 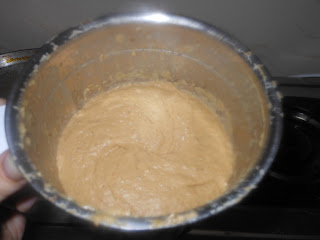 After the lengthy blending process with the tahini, I was very happy to find that in less than minute, my hummus looked great! I still blended it for another minute or two, just for good measure. The result was wonderfully creamy.

Happy to have completed it, I put some in a dip container and garnished it with a dash of paprika and another of rosemary. Then I artfully arranged my freshly delicious pita chips around it and took a few pictures.

Then I sat down at the computer desk (hey, we're newlyweds in a tiny apartment, we don't have an actual table yet. You can tell we're nerds from our priorities!) with a mug of homemade chai tea and called Ryan over to join me...

Then I dug in! Hope you enjoy this recipe like I did! Next time I think I want to try it with lemon, but it's delicious! 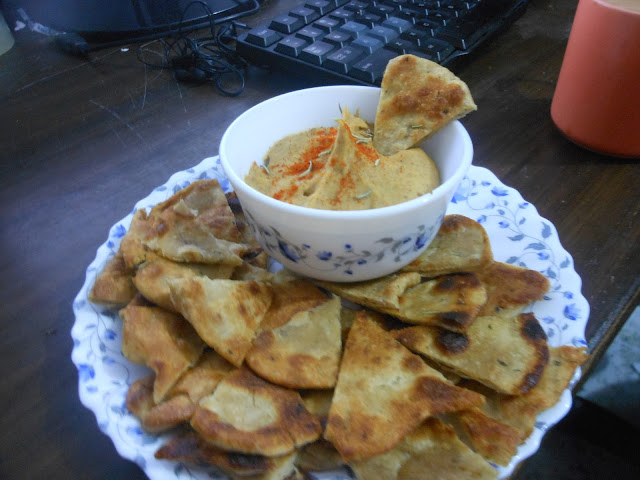