I tested positive on Friday October 11th. I had been having sore breasts, but I thought maybe PMS... then I got mild cramping and I thought okay, definitely PMS... my period didn't come but I got queasy in the morning.

So I asked Ryan to pick me up a pregnancy test and he came home with two.

Now you should understand, with my PCOS, I get pregnant-like symptoms all the time. Since we've gotten married only in February I've probably taken 6 tests, just to be sure. My periods are irregular, so it's not like I have a time I can say I'm "late"... though they had been coming with some regularity since May, but not predictability.

So on Friday morning I woke up because one of the cats jumped on my legs and got up needing to pee. You're supposed to use your first morning's pee so I shuffled out to the living room where I'd left the tests to grab one and found it'd stormed over night and some rain had come into the living room under the door. Great. 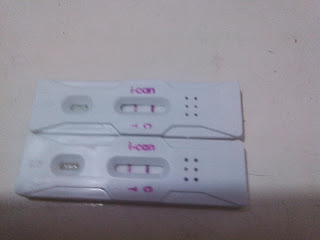 So I scurried to the bathroom, awake for like three minutes or less, and quickly did the test. My eyes
were still focusing from sleep as I watched the liquid move across the strip and a line appear.

It appeared near the T. That's for test and the other is for control, right? Was I pregnant? Maybe I mixed up what they stood for... then the second line appeared. I knew what two lines meant.

I blinked and processed for a few minutes while the test got more and more emphatic about being positive. The line became as dark as the control line. That was weird, it seems like all my facebook friends sharing test pictures had light lines compared to the control. So I had to be REALLY pregnant, right?

I got up, my mind racing. Honestly, I was scared. We're not doing as well as we'd like, financially, and I wasn't sure how Ryan would react. I was in shock. We weren't "ttc." The rational thought I seized was go get the second test. While false positives are rare, they aren't impossible but the chance of two of them would be really slim, right?

So I began shuffling through the bedroom to go back to the living room to get the other test and Ryan woke up and muttered, "What's going on?"

"Well, um, honey... Good morning. It rained and the living room flooded." He groaned. I decided to just barrel in. "And I took a pregnancy test. And I think I'm pregnant."

I told him I going to get a second test and I took it... and got the same results. Ryan was so shocked he didn't want to look at it.

When we'd had maybe ten minutes to let the second results sink in he said, "We should tell your parents."

They were overjoyed. My older sister Beth is also pregnant, so my mom was gushing about that, and later said "God is showering us with blessings."

After sharing with Mom and Dad and taking the time to thank God, because I know unexpected though it was, He is the ONLY one who opens and closes the womb and so this is PERFECT timing and I am thankful for the gift of this baby. Genuinely, amazingly thankful.

The joy started creeping in.

We tried to make a doctor's appointment but the OB GYN I'd seen before for my PCOS was out of town for a couple weeks. So was another OB GYN we'd been recommended by friends. Finally Ryan did some research and we contacted a random doctor who agreed to see us on Wednesday and even soothed my fears. I've had transvaginal ultrasounds for my PCOS and they've been so painful I've cried and I was terrified of having one again, as it's normally done that way this early in the pregnancy. She told me we could do a transabdominal one instead, and I was so grateful...
Posted by Pamela M M Berkeley at 9:11 AM