Hey everyone I just thought I'd blog about a few fun, random things this Friday.

Remember how on Monday I told you that Gurgaon winters mean fog? Here's what I mean: 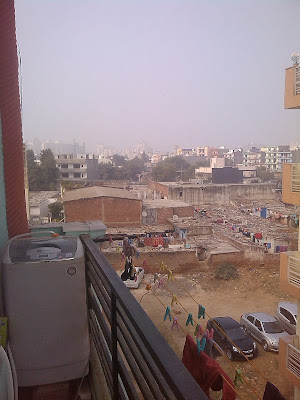 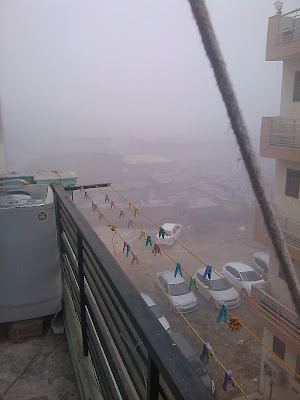 Guess what? The foggy picture? That's after the fog had lifted for a couple hours. I took that right before Ryan and I went out this morning, when we thought it had lifted enough to be safe to walk on the roads. At it's thickest I wouldn't have seen anything beyond the balcony, let alone all the way to the ground.

We walked to do grocery shopping. Of utmost importance was kitten food, since our kitties were hungry. We walked about a kilometer (I still think in miles, but when I just looked up the distance it was roughly 950 meters, so I'm rolling with it.) The fogginess made it chilly, so Ryan was being super protective. I wore a sweater and sweatpants with my good winter wool coat on ("Are you sure it'll be enough? Is that really warm?" "Yes, sweetie, this is my coat for when it's snowing.") Then as we walked there Ryan fussed over me and made me close the buttons on the front "because you have a baby in there."

We made a pit stop on the way actually and decided to stop in for hot chocolate. We just got one cup to split between the two of us.  It made me happy to see the Christmas tree they put on top! 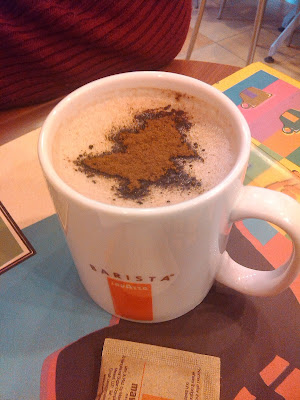 When we got to the grocery store the coat stayed on all of thirty seconds. It was HOT! They had the heat on high. I tried to go into the spice aisle to get paprika but ran out of it, telling Ryan over my shoulder to fetch the shopping cart. He found me a few aisles away, sitting down on a carboard box of pineapple juice that a stocker hadn't unloaded yet. I explained that the spices smell had made me nauseous and could he brave the spice aisle and get us paprika?

That was the first time I've been suddenly nauseous like that in days.

Ryan was being a good husband, but a slow shopper. He was agonizing over which olive oil to buy and I was like "let's just not get olive oil, we'll manage for now. Quick, quick, let's get out, I'm just TOO HOT." Concerned he told me to go wait for him outside, but I was like no, I want to help you shop... but kept making pit stops into the frozen food section to open the freezer and stick my face in.

Ryan was still being a good husband but a slow shopper when I came and got him when he was looking at sugars and told him that was that, I needed money to buy a cold drink and he could finish up, I had to go sit down outside. I wimped out.

So I did go sit down outside, drinking a cold drink and reflecting on why I'd gotten nauseous. I realize heat has always been a nausea trigger for me. I often get nauseous in the summer if I exert myself, and if I get a stomach bug one of the only thing that helps is kicking off all covers and pouring water on myself to cool me down. It hit me that maybe my drop in nausea recently had more to do with a drop in temperature than with feel good second trimester-ness? At home we're not using a heater, so it gets cold. But maybe that's actually been a good thing for my symptoms.

At any rate I glanced back in and saw Ryan was checking out and came back in, displaying my receipt for my drink prominently, and helped him gather up bags. We left the store and hoofed it off, not yet heading home but heading back to the shopping center we'd gotten hot chocolate at, about halfway between the grocery store and home, where we were going to pick up snacks. See, I've not gained anything this pregnancy yet because I just can't seem to eat enough. So I'm realizing I need to keep more snacks around.

Well we get to this shopping center, about a half a kilometer away from the grocery store's shopping center... and realize we forgot the kitten food!! That was one of the primary reasons we'd gone! The kittens had been out for a full day (we'd given them eggs to tide them over, but they wanted their kibble.) We sat down on a bench to figure out what to do.. and along comes our good friend Shushant! It was crazy bumping in to him. There was a post office there so he was about to post something and then go back to work.

After briefly chatting with him, Ryan and I went and bought snacks. We'd come up with a plan for the kitten food. We'd called up a vet that will deliver pet supplies and they'd bring it in a few hours. Poor kitties. But that way we didn't have to walk back. But we did need to get cash to pay the delivery guy when he came. We'd also decided, as a fun thing, to order lunch and I told Ryan to get cash for that too.

Well he didn't. He'd decided we'd get pizza, which you can generally order with a card, instead of the burgers I'd expected. Which was fine, pizza sounded okay though I'd anticipated burgers. But it turns out the pizza place changed their ordering system and no longer would deliver to our address! We called them up and they said they could deliver, but they wouldn't do credit card transactions over the phone and Ryan hadn't gotten cash. So after fiddling with the website for nearly an hour, he said let's get burgers.

But that also will need cash.

Okay, so we ordered them. I was looking forward to them because this is the ONLY burger place in Gurgaon I know of that has pickles and only the second place in Gurgaon I know of you where you can get pickles. I love pickles and miss them, you can't buy them anywhere. Now for my Indian readers, when I say pickles I mean pickles as in cucumbers pickled in a vinegar brine with dill, as in what you can get at Subway. I do NOT mean fermented everything under the sun that Indians call pickles. (Subway is the only other place you can get pickles, for my American readers.) I'm a picky eater, I don't eat mayonnaisse or lots of other things so Ryan specifically told them over the phone for my burgers ONLY lettuce and ONLY pickles. He said it three times, I heard him. 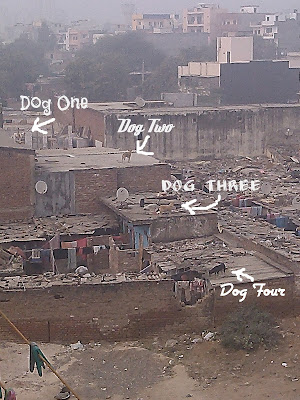 After ordering, Ryan quickly went out to an atm and came back and the delivery guy called, he was lost. So we went out onto the balcony to look for him and when we did, I saw a very funny site and got a picture: dogs on roofs!

When the burgers finally came they had everything BUT lettuce and pickles!!!

I got angry. Actually last time we ordered they got our order wrong, but luckily had left out the mayo, which is fairly impossible to get off a chicken burger due to the breading so I could pick stuff off and eat it (no, this is not beef. It's not even what you'd call a burger, Americans, it's a chicken sandwich.) This time it had mayo AND it did NOT have pickles. I told them we wouldn't pay for my sandwiches. We'd pay for the rest of the order, but not those. Ryan talked on the phone with the restaurant and they agreed. (Well sort of, actually the price of the burgers was 60 rupees each, so it should have been 120 off and they said 110 off, but close enough.)

I was irritated and hungry and sad but mollified.. until the delivery guy tried to take the burgers back! I mean, I probably wasn't going to eat them, but if they just took them back and we didn't pay for them, the restaurant wasn't taking ownership for their mistake in anyway! That made me furious. So I don't get my sandwich AND they lose nothing? I yelled at them. Like I actually yelled at them.

I think it's probably just you don't get between a pregnant woman and her food.

They backed down and left. Then I cried over the loss of the pickles.

Ryan was super distressed and kept apologizing and saying he should have tried harder on the phone to make them understand what he meant. I told him no, he was fine, he'd told them three times, what else could he have done? I wasn't upset with him even 1%. I calmed down and ate my french fries and we tried to enjoy the rest of our afternoon. I'm not really proud about yelling at them, it probably wasn't the best way to reflect Christ's love. I'm just blaming the hormones.

After watching a tv show together while we ate, Ryan went straight to bed for a nap, and that's where he is now, though I'm waking him up in a minute.

We have a Christmas party to go to tonight!! I'm excited.

Hope you all are having a fun Friday (and can get pickles if you want.) God bless!
Posted by Pamela M M Berkeley at 6:17 PM