My First Thanksgiving with the Indians

Lydia and I had intended to do a few dishes in advance so Thanksgiving day wouldn't be so crazy, but Wednesday was our trip to Agra and Tuesday was a run around like crazy people day as well, so it just didn't happen. 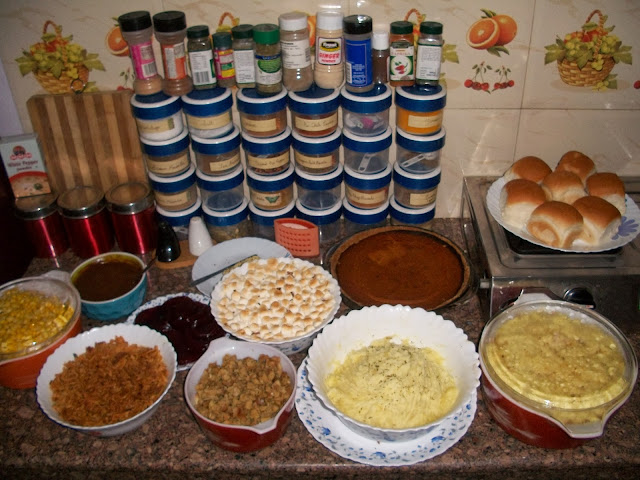 The biggest surprise? The cranberry sauce was an outstanding hit with the Indians! It was the only dish that was polished off on Thanksgiving itself.

Lydia happily took some time to teach the history of Thanksgiving to our friends (Aveek, Shushant and Anil) who were joining us for the feast. Ryan lived in America for 6 years as a kid, so it was just a history brush up for him.

Aveek was the pickiest, but from experience I've found he's not a big fan of American food. He did like the sweet potato casserole, cranberry sauce, stuffing, and corn though.

Ryan gobbled it all up.

Anil ate most of it, though I think there were a few dishes he didn't like. He was very enthusiastic about the sweet potato casserole, I think. He also liked the pumpkin pie, the only one of the friends who did.

Shushant seemed to like everything okay, except the pumpkin pie.

Lydia said the pumpkin pie was the best pie she'd had in her life. That made me happy, as that had been one of my dishes.

I enjoyed everything except the cranberry sauce (which I've never been a fan of) and made myself a heaping plateful... which I had to break up eating since my pregnant tummy has a smaller capacity than I'm accustomed to having.

All in all it was a huge success and Lydia and I thought we pulled it off well!
Posted by Pamela M M Berkeley at 4:07 PM

Email ThisBlogThis!Share to TwitterShare to FacebookShare to Pinterest
Labels: Thanksgiving