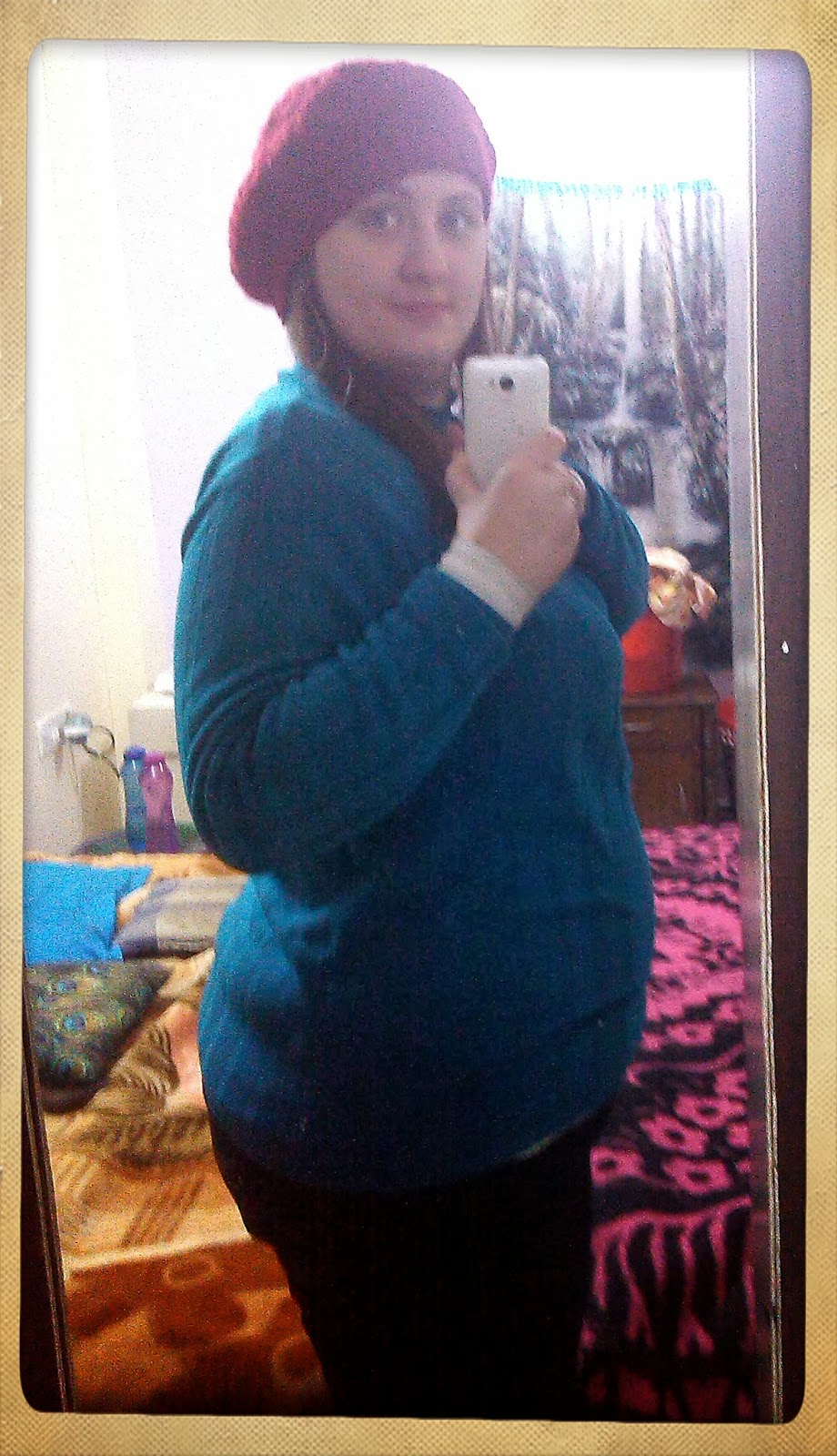 Actually that's a funny story from the beginning of the week. As I've mentioned before when I lay on my back I can feel on my stomach the lump that is the baby. I can't make any details out yet, it's just a lump but it's the right size (sweet potato at week 18) and different times I go to feel for it it is in different places, so I know it's the baby moving around. Well on like Monday or Tuesday I woke up and felt for him/her.. and was like "Whoa. The baby is bigger."

It's funny, since I do read about how the baby is growing each week and I know theoretically how big the baby is that this was surprising. But it was because I've only been able to feel that lump for a few weeks now and it's felt relatively the same size. But suddenly it seemed much bigger and the reality that it's a living, growing baby seemed that much more real.

As you can see in the picture, I think I am *finally* starting to get a bump. When you compare it to my announcement photo it's a definite difference... but at the same time I don't really look that different in the waist area then I did before my recent weight loss so I'm definitely in the "is she fat or pregnant" stage still. But now my belly is rounding out a little and that's good. I'd like to get that "Yep, she's pregnant" bump soon. lol.

My weight has been a bit of a struggle. Not the normal issue of gaining too much but instead up until this week I'd really not gained at all. I'd lost 5 pounds since I found out I was pregnant, then gained it back... as of week 18 I was weighing in at 1 pound more than what I was when I found out. I found out at 7 weeks, so that's 1 pound gain in 11 weeks. But if I looked at my weight loss logs since I was actively trying to lose when I found out I was pregnant, I was still down 8 pounds since I conceived. So really -8 pounds at 18 weeks. However, I am not sure I should even count that time since I was actively calorie restricting and had no idea I was pregnant. That's also when I had dengue and had no appetite and lost a lot from that as well.

As an obese individual despite all the weight loss, I'm only supposed to gain 10-15 pounds in the course of my pregnancy. I'm not sure if that's from my find out weight or my conception weight since they're 9 pounds apart, but that makes me figure that I have anywhere from 9 pounds to 23 pounds range to gain in before the baby comes to be normal (depending on which starting weight I use.) However, I do know a friend of mine who lost and lost during her first trimester and the beginning of the second, then gained 30 pounds from the end of her second to the end of her pregnancy! I'm hoping not to do that, but knowing that story I'm also trying to worry about the fact that I'm not gaining as soon I may be worrying that I'm gaining too fast!

It's getting harder to come up stairs and stuff, and it's making it all the clearer that we should probably start looking around for a new apartment. I have mixed feelings about that. Logically, I am all for it, it's totally practical and necessary, for more than just the stair reasons. Emotionally I love this apartment and location and will be sad to go. But I think by the time we move (probably Feb or March) I'll be so big that I'll be very happy to kiss the stairs goodbye as we're on the Indian 3rd floor (American 4th floor.) Also when we get a new place I'll know that's the place the baby will come home to, so I can start nesting. But I don't know where or when that will be, how big the place will be or any of that stuff. We really need to look and be realistic.

Also we haven't really started buying baby stuff. Partially we don't have much money for that earmarked yet. But also it seems like logically get the important items first, right? But if those items are big, why get them now and only have to move them in a month or so? Might as well get our place first then get the big items there, right? I think this will start feeling so real when we have baby stuff set up. We do have some stuff that people gave us via Lydia when she came, but it's packed away so it doesn't get dirty (or played with by naughty kittens) in the meantime, so it's not a daily visual reminder yet.

Still we're getting closer and closer to this pregnancy being half over and I want to really start the preparations. I don't think I have hormonal nesting bugging me yet (thank God) but I am wishing Ryan was a bit more open to talking about baby items. As it is though, he's stressed out about finances and I think when the move is behind us he'll be much more likely to get into it. He's being very sweet and keeps calling the baby "my son"... I point out it might be a girl, and he'll agree, but he still calls it "my son." He's just got a gut feeling the baby is a boy. Truthfully, my gut says he's right but I am still sure not to call it one gender or another because I'd be over the moon if it's a girl, so it's fine.

Soon we'll be getting our anatomy scan and I think that will be a little tough since if we were in America there's no way I would not find out the gender (except if the baby refused to cooperate of course.) I'm not a "team green" person by personality. But here in India it's illegal to do pre-birth gender determination so we'll be surprised in the delivery room, which I hate. To me there's enough drama and life changing-ness and surprise going on when the baby is born. Gender doesn't need to be thrown in there. Still, the law is put in place for those who might abort the baby if it's not a boy, and I support a law that hopefully is saving little girls' lives.

Overall, I'm feeling good and as far as I know all is well!
Posted by Pamela M M Berkeley at 7:20 PM