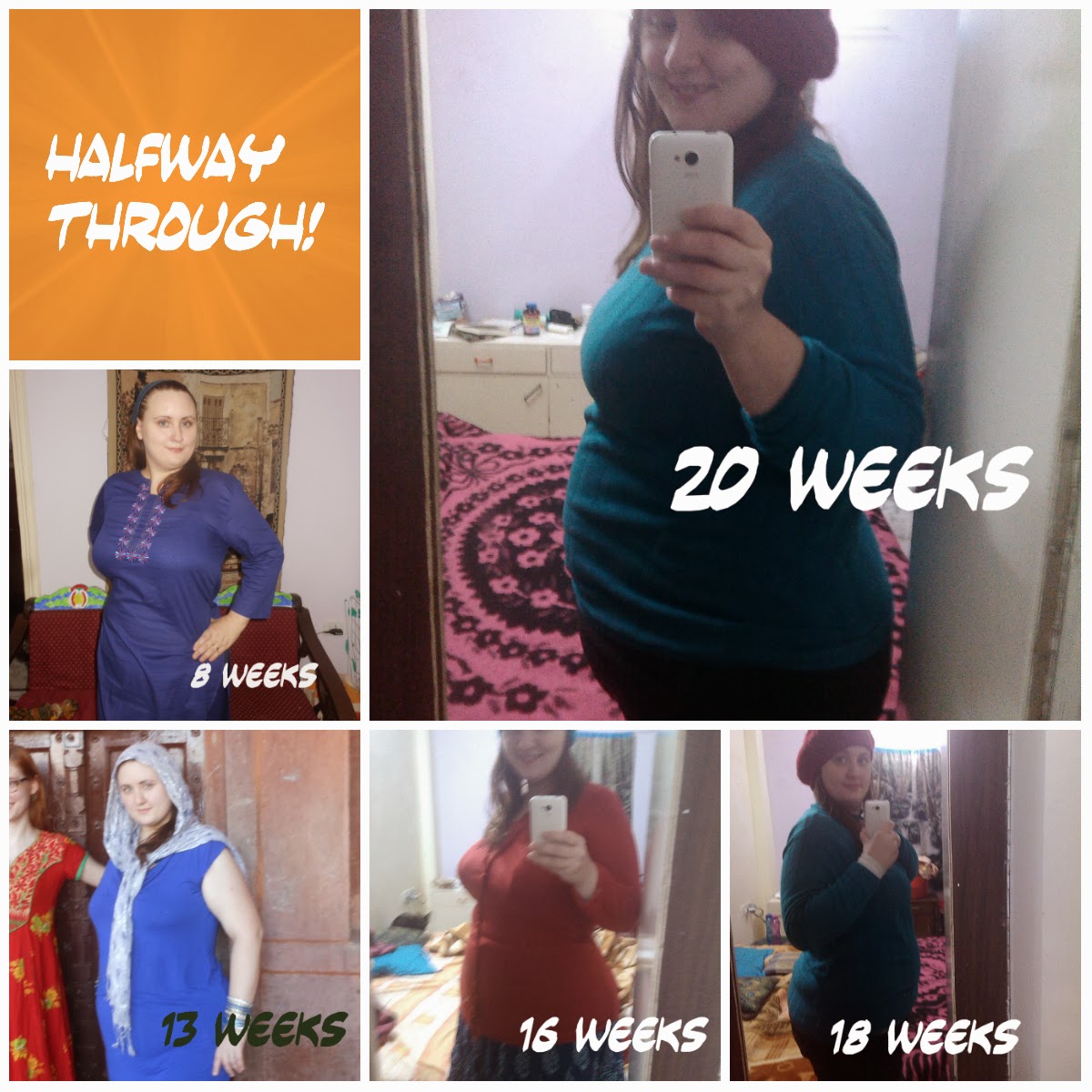 Well sort of. In pregnancy the first two weeks don't count... BUT while they estimated due date is set for 40 weeks, a baby born at 38 weeks is still considered full term, so you sort of are halfway through (but 42 weeks is also okay, so that'd make the halfway mark several weeks away.)

Still, traditionally since the due date is set at 40 weeks, 20 weeks is considered halfway through.

Tuesday I felt him/her at least ten times! I think I have felt the baby at least once a day.

My appetite is so much bigger! I am getting ravenously hungry, and I think my bump is more prominent. I really want a nice big bump and I do think I am "showing" now... Ryan disagrees though. I showed him my 20 week photo and said happily, "Look! I'm really showing!" and he said, "It's not that noticeable, honest. It looks like 'ahhh I had a big lunch'" making the kind of big sigh someone makes when they're letting their gut hung out. Thanks, sweetie. (Sigh.)

On Wednesday when I weighed myself and for the third week I think I was only at a two pound gain since I found out I was pregnant. On Thursday I was deciding if I was going to weigh myself again when I thought, "You know what? Women have been having healthy babies for centuries without ever getting on a scale" and decided to weigh myself a little less frequently. So I didn't weigh myself again until Sunday.

When I did, I had lost those two pounds and was back at the weight I was when I found out! That really freaked Ryan and I out a bit, not sure why that was happening. I have been eating, after all, and this week more than previous weeks... then about six or eight hours after I weighed myself I was shivering and suddenly it hit me. It's the cold! To save money Ryan and I have not been using a heater this winter. This means we've been wearing tons of layers, but also that we're cold. The lowest it's been is high 30s farenheit. So cold, but not freezing and we're getting through it. But this past week it's actually been so cold we can see our breath in our living room. That's just this past week or maybe two, so it hit me suddenly that my body obviously  must be using up an increasing amount of calories to heat itself up to homeostasis, and that's the reason for the sudden weight loss. That relaxed me. I'm still trying to make sure I am eating enough, of course, but that's a logical enough reason not to worry. And since I'm not sick or anything, I'm sure my baby is warm enough in the midst of my abdomen that he/she probably don't even notice.

I don't know if I mentioned it before but I have an anterior placenta, which means that my placenta is in front. In most pregnancies, the placenta is in back. This means that I can't feel the baby as clearly as most women. So after the weight loss I was freaking out, wanting to feel the baby, and of course he/she was stubbornly not moving enough to be felt with my AP for hours... but feel him/her since then I have! I'm looking forward to my anatomy scan, which is coming up. For those who don't know that's the big ultrasound, where they check all the organs. In America, that's when you find out the gender but of course here in India that's illegal. Our OB GYN has a "4D" ultrasound machine so I'm hoping to get to see his/her little face as well. I may have that for next week's update, though we tend not to get the photos right away, so it may have to wait to be shared.