Can you believe it? My baby girl is a month old! 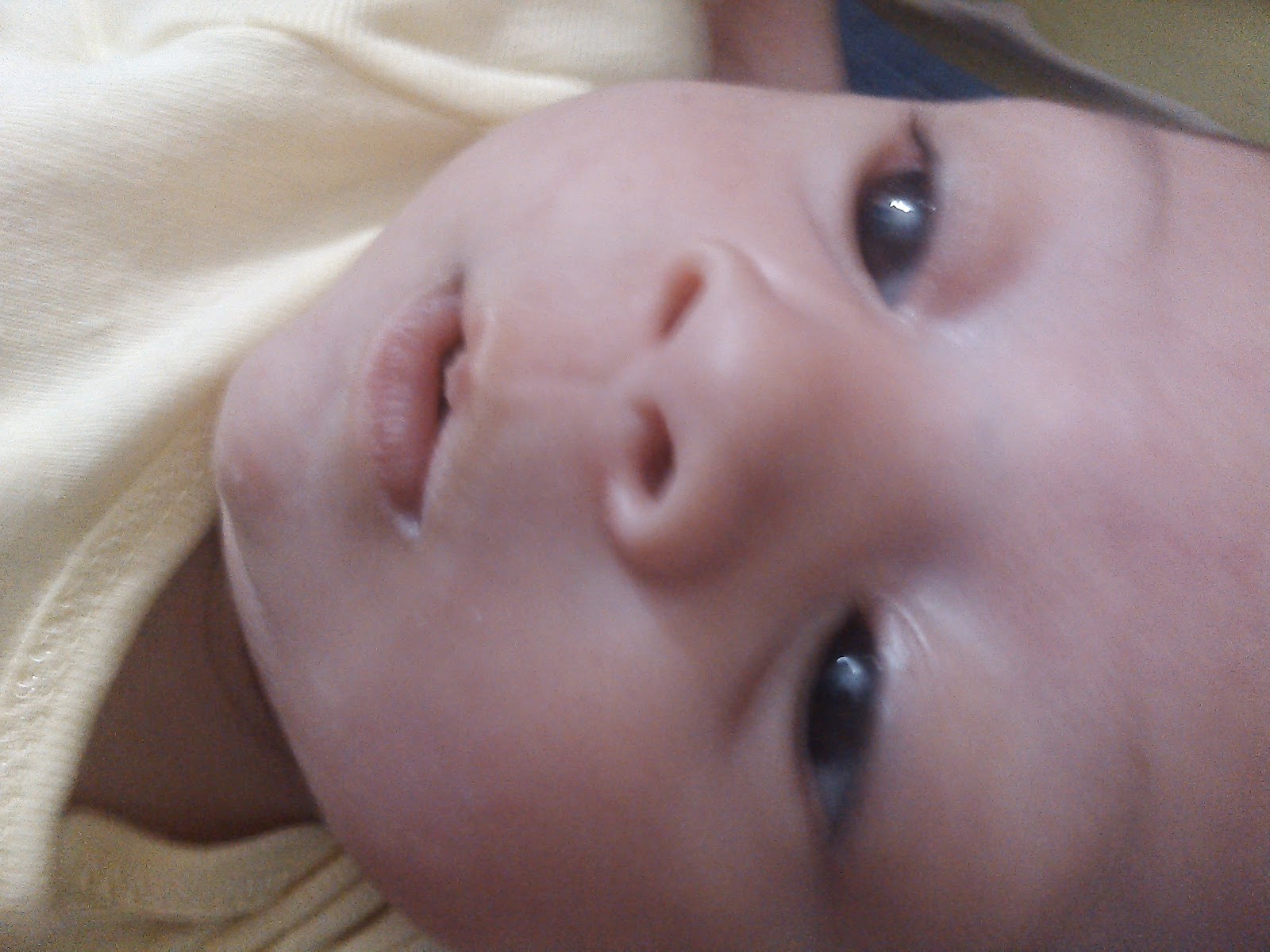 We took her to her one month well baby check up with her pediatrician. At birth she was 5 pounds 12.7 ounces (2.63 kilograms). Now she is 7 pounds 11 oz! (3.49 kilograms!) We'd been told she needed to gain a half kilogram a month. We actually weren't sure if it had to be a half kilogram by one month, as what we were told was "She'll lose for the first week, then she'll gain a half kilogram a month after that." So that may have meant it'd be considered normal if she'd gained a half kilo by one month one week... but regardless, she knocked it out of the park! And this exclusively breastfeeding mommy feels very vindicated in that her baby is not "thin"! (Yes, someone said that to me. For a breastfeeding mama, those are fighting words! Haha.) 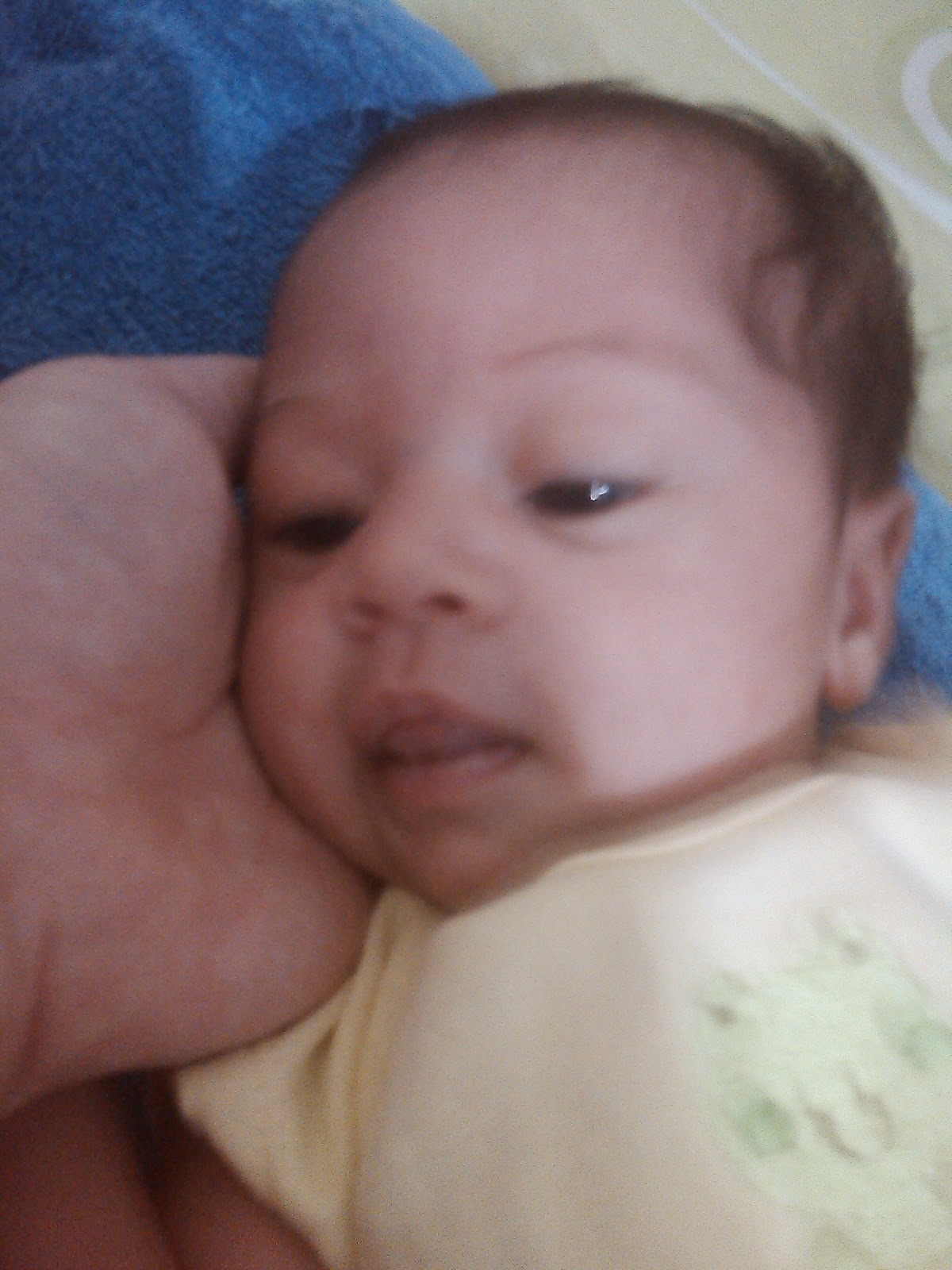 He didn't measure her length, so I don't know how much she's grown. I will say though that the length I previously shared on here was wrong. That is, when they took her off to the nursery at the hospital I asked the nurse how much she weighed and her height and she brought me a sheet of paper that said 2.63 kilograms and 32 cms. I'm an American so I think in pounds and inches and didn't think that looked strange, just hard to relate to.. well when I converted 32 cms to inches it comes to 12.59. And everyone was saying no way she's that small. I just shrugged and said that's what I saw... well Ryan had to take the birth certificate to a government office at day 15 and I looked at it... and saw her official height on the birth certificate is 49 cms. As they took back that piece of paper before I left the delivery room, I don't really know what 32 was, but 49 cms comes to 19.29 inches and is much more normal of a height! That's how tall she actually was at birth. (I think 32 may have been her head circumference as her 1 month head circumference was 35!)

There's some reflex that makes babies bow legged at first (better to curl up in the womb) and I've read that some pediatricians don't like to measure height until that reflex goes away, which I think is around 6 weeks? So maybe next appointment he'll measure height as well as weight.

She's meeting our eyes, but not yet tracking motion (which apparently starts more towards two months. Someone or something told me 1 month and freaked me out.) She had this horrible bump on her arm that was looking filled with pus and angry and my in-laws made us paranoid was some horrible bite... turns out it's the reaction to the tuberculosis vaccine she got at the hospital. It crops up as a "nodule" at 3-4 weeks and if it doesn't appear apparently it means the vaccine didn't work so as ugly as it is, it's a good thing.

Oh, and she's got pretty good taste in music. I put on the Beatles when she wouldn't stop fussing the other day and she instantly calmed down! I think this is because I had had the Beatles cranked up and was jamming to them while cleaning house the morning my water broke, so it's one of the last peaceful things she'd have heard before she left the womb. Also, the Beatles are awesome. But more on that when I publish a post that was in the queue  the week she was born!

Some have asked about my birth story post. It's like 95% written, I just need to polish it and add pictures. No, no graphic pictures, we didn't take any, I'll just be putting in pictures post birth. Last thing I was thinking about while in labor was snapping photos.

And lastly now that she's one month old I really need to give her a blog nickname! I have been trying to find something that is both apt but also sounds pretty... I have failed. So I have decided to go for apt.

In the hospital I decided to nickname her "Dreamer"... I was just trying to find a prettier way of saying it. But there aren't any girl names that mean "Dreamer" except one in Arabic, which seems like that'd be confusing. And just using it in another language still they just don't seem "name"-like. So I decided I'd be more literal and just call her Dreamer! (Either that or wait another month or two to make a decision!)

Why Dreamer? Well from the day she was born she's had an active dream life. She smiles, laughs, cries out, whimpers, furrows her brow, thrashes her arms, etc while sleeping and always has. She'll start breathing so hard you think she's running or she'll just keep having flitting smiles over her face every few seconds... it's enchanting and makes me wonder what in the world she's dreaming about. It's fun to think someday she can tell me about her dreams. So Dreamer seemed good, and it doesn't seem like the kind of name a kid will grow up to hate. A lot of cute baby nicknames wouldn't be appropriate in some years from now when she's aware of my blog, but being a Dreamer isn't really a bad long term thing. 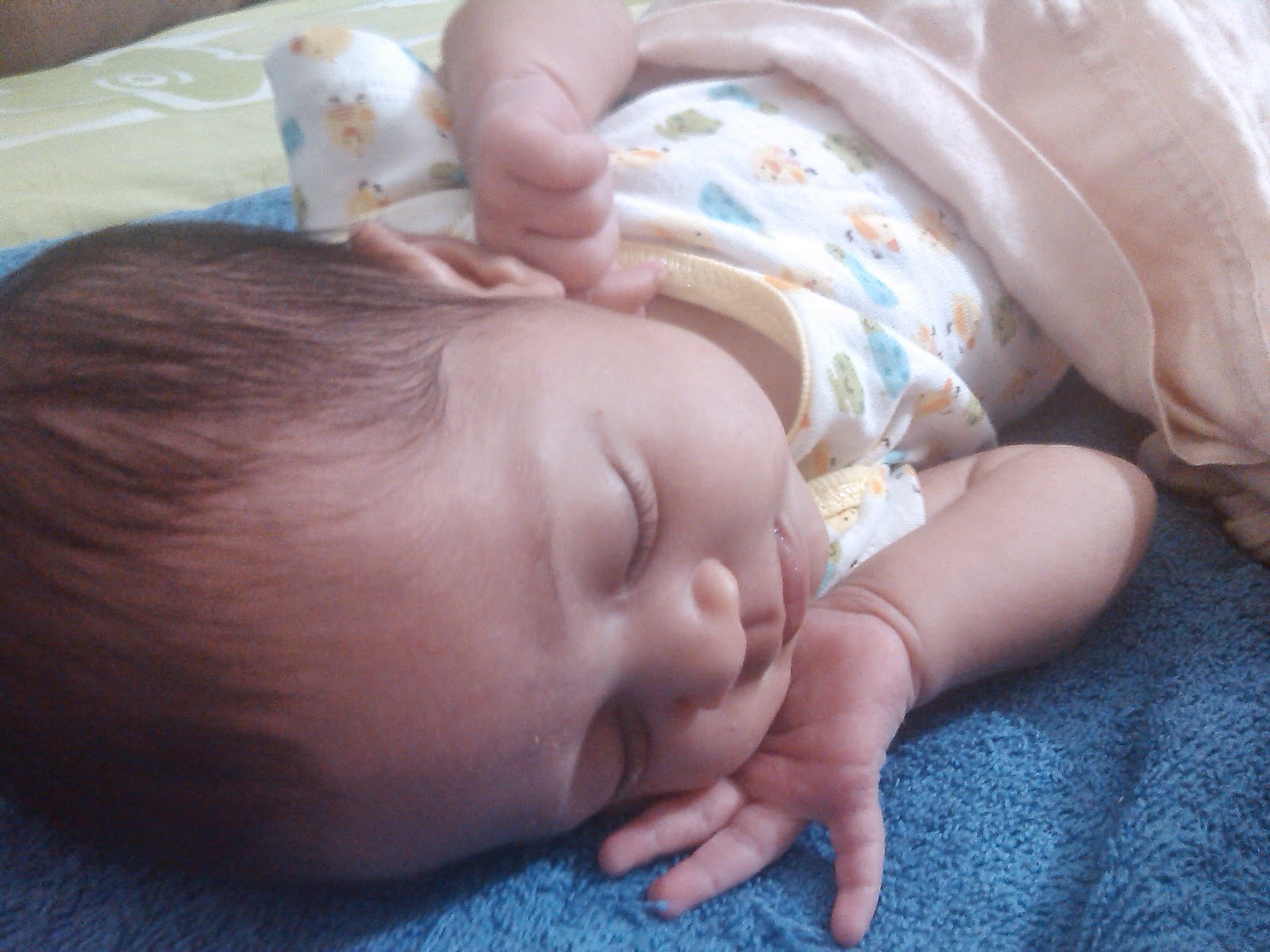 So introducing "Dreamer", my beautiful one month old little girl!
Posted by Pamela M M Berkeley at 11:15 AM