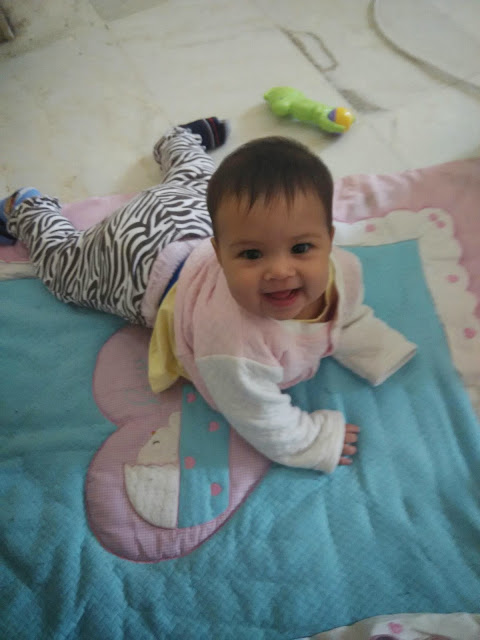 Blog wise I've obviously introduced this new photo challenge. Otherwise, I'm just thinking over and praying about changes. Having Dreamer made it harder to find time to write quality blog posts, I know. It's not that I don't have them in me it's that I rarely get the time to sit at our desktop for the time it'd take to produce them and the phone isn't really the best place to write. Generally I"ve had one or both arms around the baby the majority of the time, so I can just peck something out one handed... and I don't. When I do get two hands free there's other things demanding my attention, like the laundry. However, she's getting more into toys now.

It's amazing to take a whiny baby and hand her a brightly colored piece of plastic and watch her get happy! She wasn't really interested in toys until say 5 months and she hasn't really been into solo play with them until more recently, so being able to gain ten minutes of peace here or there has been amazing. The house is much more manageable! And that's making me think I'll be able to bring more of a focus to the blog as well soon. Of course she's also on the cusp of true mobility so that will mean I have to watch her closer. So we'll see.

Right now she can push herself backwards, but hasn't figured out how to crawl forward. So if I put her on a blanket on the floor she will generally get off the blanket, but not by more than a foot or so before I pick her up and put her back in the middle (which she wants me to do because she's frustrated because she's not trying to move backwards and so is seeing her intended destination get farther and farther away.) The cold is making floor time hard to do though. We have one space heater, radiator style, which I'll throw a blanket over a few minutes before I lay it on the floor. But once it's cooled off she starts whining to be held pretty quickly. We have marble floors not designed to stay warm by any means (so as to survive the hot Indian summers.) Our winters are short though, so while January is the coldest month there will be warm days here and there come February and it'll be full blown warm by March. Summer starts in April. 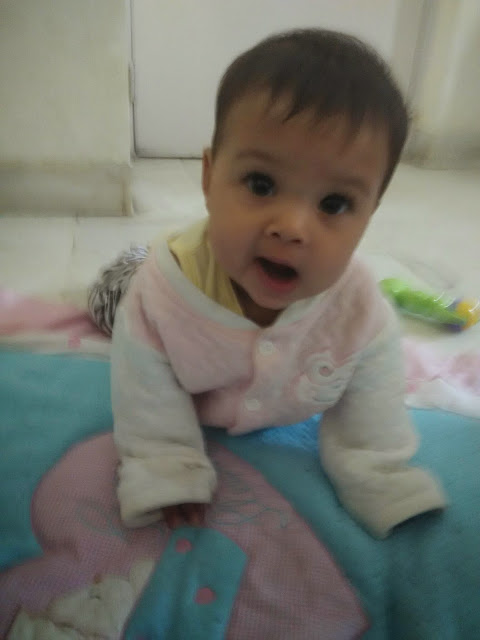 And while I do think she'd have already been crawling if it was warm enough for her to get a lot of floor time, it's just as well. Having a few extra weeks of not having to chase her isn't a bad thing!

Goal wise for 2015, I have more overarching ones than precise ones. I want to get a handle on my sleeping disorder. There was no point in even trying with a newborn, since she'd have counteracted any measures I took, but Ryan and I have been looking into investing in equipment for therapies and maybe I can get on a schedule. There will be a lot of trial and error in seeing what amount of intervention I need and it doesn't work for everyone with my condition anyway, but I am hopeful it will help and maybe in a few months I will be more "normal" as long as I do my daily light/dark therapy. I'll probably be starting that around the end of the month.

God wants me to finish the book He's called me to write. Not the novel, a different one. I'll be telling you more about in the next week or so. (I may return to the novel, but I actually dropped that when God made the calling for this book first clear to me last spring.)

I am still, as always, working on keeping the house better. Being on a sleeping schedule, if the therapies work, will be extremely helpful in that regard, obviously.

Otherwise I think our biggest goal this year is hopefully to get to visit America and let my parents meet Ryan and Dreamer for the first time! Any prayers you want to shoot that way would be helpful.

Love to you and yours in this new year!
Posted by Pamela M M Berkeley at 7:00 PM