It has been hot and busy here. Dreamer is taking an afternoon nap and I am resting too because it's just feeling too hot and sticky to be very productive. I know in a month these temperatures will seem cool though, but my body hasn't yet adjusted that far. 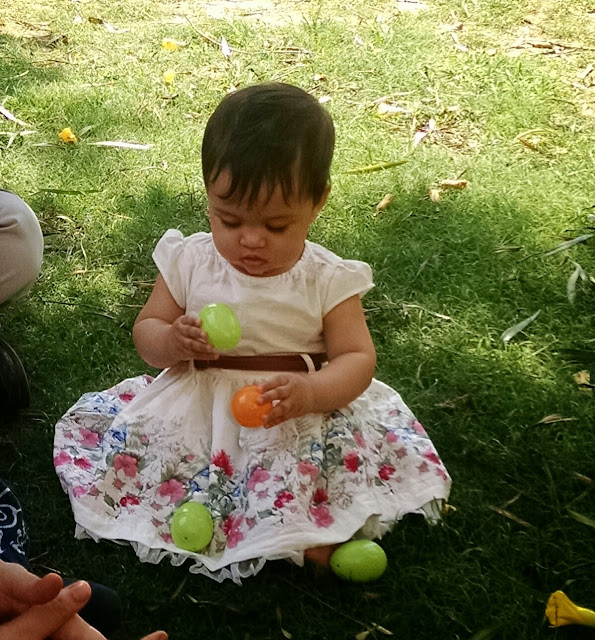 We had a nice Easter and hope you did too. Ryan had a five day vacation from Good Friday until returning to work on Wednesday, which is why I haven't written much. I also had guests over the Thursday before, Saturday, and Sunday. We spent Good Friday at Ryan's parent's, as well as Easter lunch. Tuesday we had a fun day out and then went to dinner at friends'.  Wednesday and Thursday I spent the morning out and the afternoon in chores that had been primarily neglected during all the bustle.

However I also had drama on Thursday. Dreamer is a pre-toddler now, getting into everything. She got a tube of odomos, which is a mild DEET based mosquito repellent lotion. I took it from her, but realized that the cap was off. Looking at her face, she had some near her lip. I looked at the tube, noting that most of it was still there. If she swallowed any it was less than a teaspoon.
I called the manufacturer, explained and asked if I should be rushing to an ER. They said that it shouldn't harm her, but call my local doctor. So I called her pediatrician who seemed unworried and said it shouldn't harm her, but induce vomiting. I asked how and then did.
I felt really bad, she was so confused. Poor baby! But she was okay, and never had any signs or symptoms of anything wrong.

Later that night she tried to pull herself up from a crawl on the walker, which rolled away so she fell SMACK! The back of her head hit the marble floor. I was very frazzled and worried trying to evaluate if this was a no big deal kids fall down kind of incident or again, if I should be headed for an ER. Blessedly, it was the former. She's fine.

Anyway, that's basically been my week. I keep thinking to blog but it has been competing for my attention with many other responsibilities and distractions. Mostly things are good.
Posted by Pamela M M Berkeley at 2:32 PM