Okay, so the other day I faced dinner thinking: what am I going to make?

The only thing I could think to make was chicken tacos... which I'd made two days prior. But it was good food and I decided it was better to start making that than waste a half hour dithering about what to make.

So I browned the chicken and added the spices to make taco seasoning (I didn't have a handy packet) and was letting it simmer with a good bit of water... and then I was thinking, I wonder what else I can make with taco meat besides tacos?

A few google searches later I had inspiration, if not an actual recipe, and began an experiment to make my own taco pasta dish! 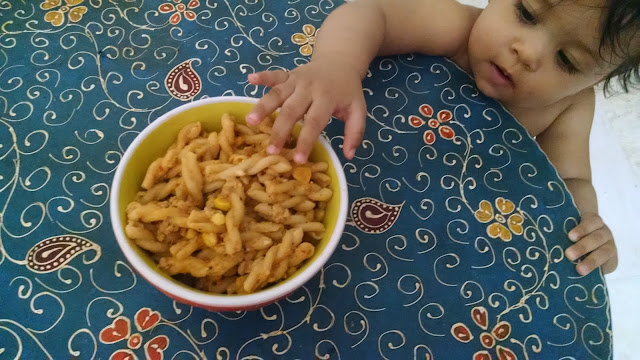 As you can see, Dreamer approved!

1/2 kilogram (1 pound) minced (ground) chicken*
Taco seasoning or make your own
300 grams of whole wheat pasta (you can use regular)
1/4 cup cream
1/2 cup corn kernels (I used frozen)
Ketchup (or tomatos! I didn't have any and decided a little ketchup would give it zing.)
Cheese (I used four cheese slices I broke into pieces; there's a lack of variety of cheese in India. Shredded cheese of any variety would do as well, or likely better.)
*can easily substitute beef or if vegetarian, beans or lentils.

2. Add the taco seasoning and extra water (if it seems low before step 6, add a little)

4. Add cream, corn, and ketchup to the meat mixture so they simmer with the spices.

5. Put pasta in the water when it boils, cook as directed. Drain. 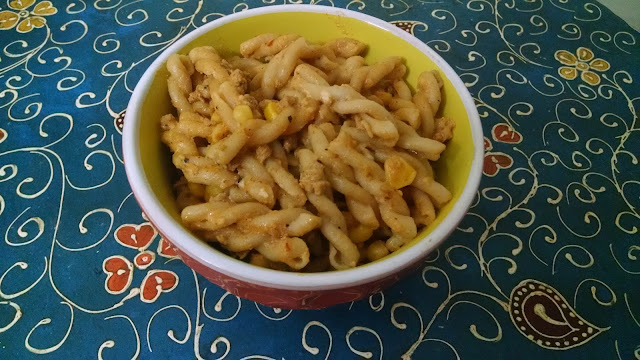 Once it was finished it was really delicious! I know the ketchup is a bit odd, but I looked at several taco/chili/enchilada inspired pasta recipes before decided to try this and in every single one some form of tomato was added, be they fresh tomatoes, tomato paste, or a tomato enchilada sauce. I looked into enchilada sauces and saw that some are actually made from ketchup, so decided it likely wouldn't be a disaster to add a bit... and it wasn't!

And continuing my thousands thanks to God:

Email ThisBlogThis!Share to TwitterShare to FacebookShare to Pinterest
Labels: recipe