I still haven't found the equilibrium of Ryan's new schedule. Misplacing my therapy light for two mornings did not help. And now Dreamer has a fever.

Overnight she woke me up every half hour or so whimpering. I'd pull her close and nurse her and we'd fall back asleep and then half an hour later...

To top it off on Tuesday evening the gas ran out. Here we have to order cylinders if natural gas for our stoves. No stove, no desi chai. I could and did have green tea made from water heated in the microwave but it's not the same.

I monitored Dreamer's fever and it went away by the evening, but stuffy nose, sneezing and a cough persist. KC, our houseguest who is still with us, had a cold last week that lasted a week, but we're praying Dreamer recovers faster.

She is SUCH a Daddy's girl. She was asleep when he went to work and when she woke up she looked sleepily frantic over his side of the bed and even looked under his pillow! Then she wailed, "Dada! Dada!"

I took her to the kitchen to get a snack. I set her in the floor while I got fruit out of the fridge. She tried to get in there herself and sobbed when I pulled her away and closed the door.

"Do you want an apple?" I asked to snap her out of it. 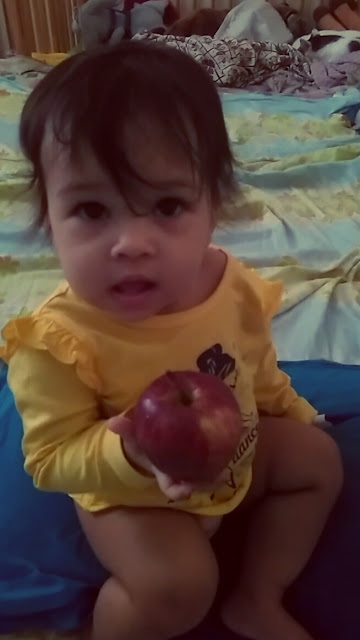 "Apple?" her head whirled around, instantly stopping her crying. I grinned huge, because that was the first time she'd said that. "Apple!" She said with triumph as she spotted it in my hand.

I'd say I am now confident apple is her favorite fruit. I knew it was between apple and watermelon, but now there's a winner.

Later I had headphones in and we're in the bedroom and she's pulling my sleeve. I'm not ignoring her, per se, but it took me. a few minutes to realize she was clearly asking me something. "You want to go to the living room?"

"Daddy's not home yet sweetie."

"Daddy!!" She gestured towards the living room.

"Daddy's still at work," I told her, "but we can go to the living room if you want."

As I hit the light switch on in the living room I hear singing from the stairwell. KC was home! With my headphones in I had missed hearing the doorbell and poor girl had been waiting for 15 minutes and would have been waiting longer if Dreamer hadn't been convinced it was her Daddy who had rung the bell.

So that's the update from us, disoriented, but still with plenty to be thankful for: